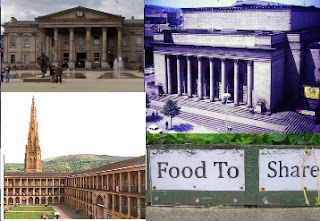 These settlements are, from top left clockwise, Huddersfield (station frontage), Sheffield (City Hall), Todmorden (food growing project) and Halifax (Piece Hall). Or we could have shown you these buses ... 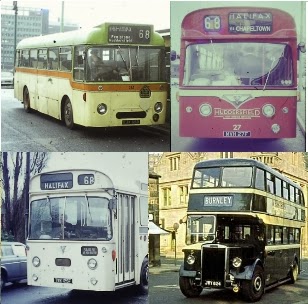 ... three of which are operating on the joint route between Sheffield, Huddersfield and Halifax.  All four bus operators had joint omnibus committees. In the 1930s, the railways began operating bus services and thus became a threat to Corporations already running longer out-of-town routes. To keep things stable and to prevent destructive " competition" these  committees were formed.

In Sheffield (a set-up with which fbb is most familiar) it was organised thus.

A routes
These were services operating within the original (1927?) City boundary. There were exceptions. The Rivelin Dams route (54) ran outside the original city limits; and, post World War 2, when the city expanded in the north, routes into the Parson Cross estate (49, 79, 110) were allowed to cross the boundary at the Hartley Brook and penetrate into territory formerly part of Ecclesfield Urban District.

B routes
These served settlements just outside the designated boundary, but very much part of the Sheffield conurbation, such as Chapeltown and Dinnington. Here the operation was split 50/50 between Corporation and Railways. Revenue and expenditure were shared and half the B fleet vehicles were railway owned and carried (post 1947, of course!) "British Railways Board" as their legal lettering. Perhaps less obviously, the Bakewell routes were category "B".

The Corporation Transport Department general manager was "secretary" of the joint committee thus ensuring that all was properly co-ordinated and presented as a unified network. The committee structure was dissolved with the arrival of South Yorkshire Passenger Transport Executive; "B" routes transferred wholly to the PTE and "C" routes to the appropriate chunk of the National Bus Company. 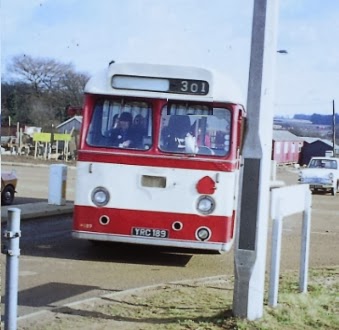 Almost everything about his picture, and millions like it, is wrong. 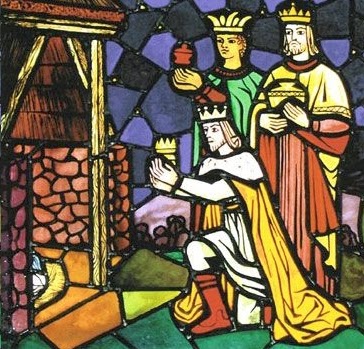 They weren't kings and they did not go to the stable/cattle shed. We are not told how many of them there were, so three is just a guess! It seems that they were Magi, top dogs of the Zoroastrian religion which emerged about 600 years before Christ in what became modern Iraq. It is probably unfair to dismiss their studies as "crude astrology" as separation from the more scientific "astronomy" came much later.

Perhaps a new set of words for "We Three Kings" is needed?


We three kings of Orient aren't
Royal title; use it, you can't.
Zoroaster is our master:
Light is all that we would want.

Gold, a King in Bethlehem's town,
Toddler he, not wearing a crown.
King forever, ceasing never;
Mankind will one day bow down.

Frankincense, the smell of a priest
Every day a Christmas feast!
Jesus leading, interceding,
God on High became the least.

O comet brilliant, streak of light
Pointing westwards through the night.
Ice and dust-ball, gift to us all,
Guide us to th'Eternal  light.

Myrrh is weird, a gift for the dead;
Die for your sins, that's what he said.
Sorrowing, sighing, bleeding, dying
Crown of thorns upon his head! 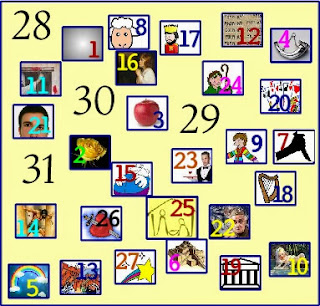 But the famous three recognised the true reason for the season; the prophetic prediction of God's Messiah doing something special for the world by getting himself nailed to a cross.