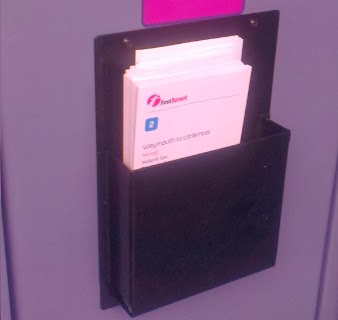 They do exist, timetables for First Bus services in Weymouth, that is. These were in a rack on one of the super new single deckers launched a week ago. The leaflets can also be downloaded and printed out. 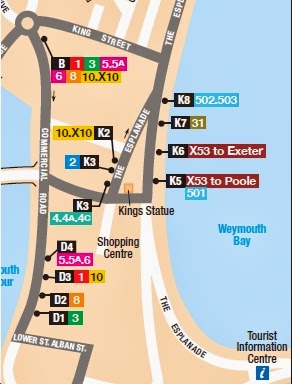 Once upon a time, it might have been easy. Many services (but by no means all!) terminate at the Kings Statue. 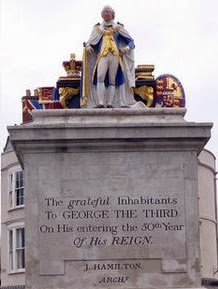 Kings Statue is a tribute statue to King George III, located within Weymouth, Dorset, England. The buildings on the seafront are mostly of Georgian architecture dating from the period he was in power. It is a Grade I listed monument.

Other routes have heir "terminus" at Debenhams,  (stops labelled "D") but "round the back" on Commercial Road. 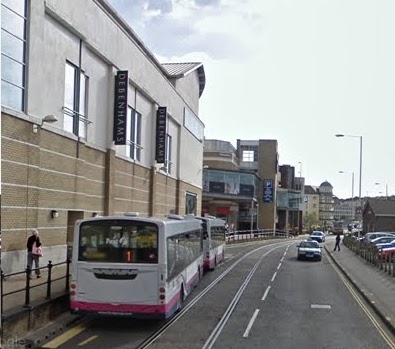 The Tourist Information Office was, conveniently, at the Kings Statue. 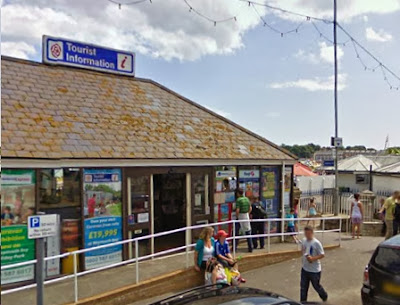 In theory, at least, a full set of leaflets for all operators should have been provided there; although experience suggests otherwise. But it's closed down, anyway. In theory, again, its leafleted replacement is near the old harbour station, in the Pavilion; where the new buses were launched just over  week ago. 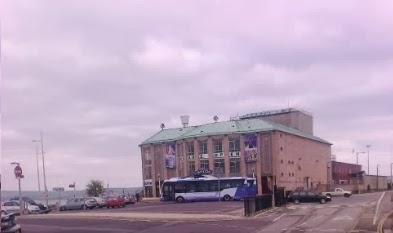 But no buses go there.

When fbb was inside, enjoying his tea and buns, he did not yet realise that it was the new TiC, so failed to instigate a full exploration. There were a few racks of literature scattered around, but your eagle eyed blogger did not spot any bus information. If there was anything, it was not obvious; reminding fbb of one TiC where the young assistant said, "Oh, no! We don't put bus leaflets out because people keep taking them."

But Dorset Council has recently replaced all the old bus shelters ... 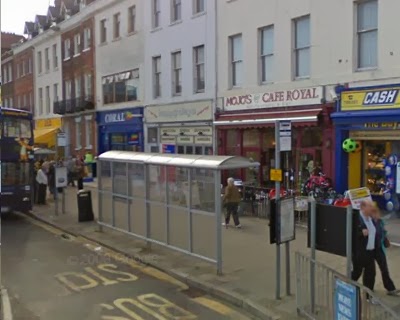 ... with spiffing oddly shaped blue ones. 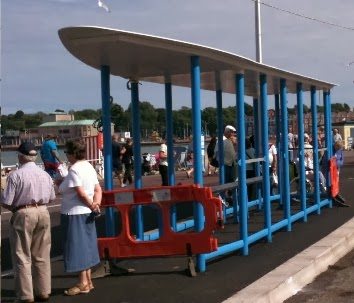 Taking the service 2 as an example, fbb first noticed that the shelters are only labelled with stop letters; there's nothing to say where the Littlemoor service stops. So you need to explore a little to find the right one.

But there are lots of poster frames ... 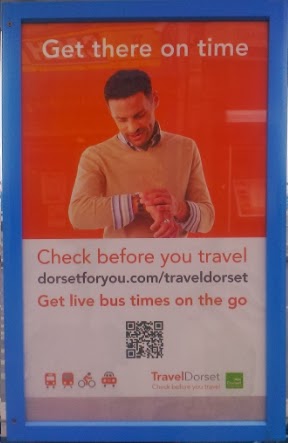 ... all advertising the Travel Dorset web site - but not a word about service 2!

Inside the shelter, things are a little better. There is a departure list ... 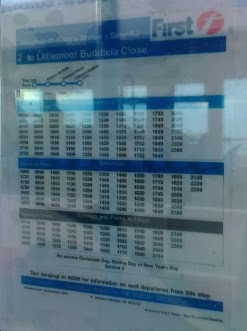 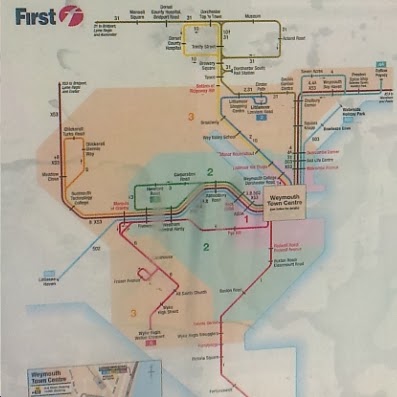 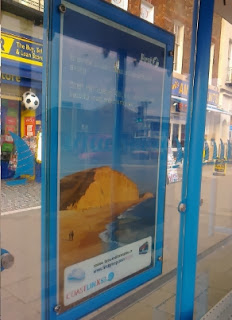 ... no timetable. Dorset Council has installed splendid video screens as here for service 2 ... 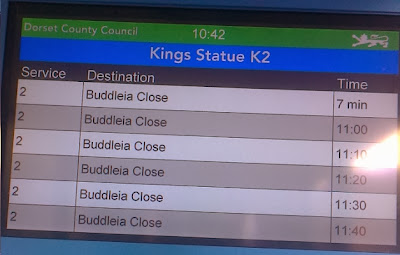 ... sadly not showing any buses to Littlemoor! [OK, fbb does know that Buddleia Close is the "official" stop name of the terminus; but the buses, the timetable leaflet, the departure list AND the route diagram all use "Littlemoor". Poor] 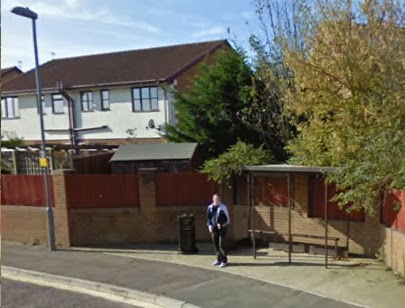 So it looks as if you have to catch a bus to get a timetable; ten buses for  full set of First leaflets. Or maybe go to the pub?

On his was back from Weymouth, fbb was attracted by this sign outside the Swan at Abbotsbury. 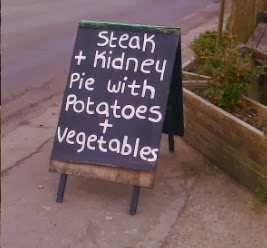 The lunch did not disappoint! 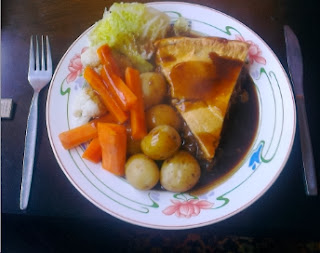 And there, on the bar, was a rack of leaflets for the X53, which stops outside. 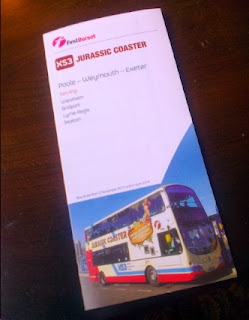 Only another eight to go!

Poor marks First. You really should try to tell your potential customers when and where the buses run. What would the reaction be if Tesco put up a poster saying, "We'll only tell you what we sell after you've bought stuff" - hilarity? frustration? use another supplier?

Samuel's second go at finding a King for the emerging nation of Israel involved an X Factor selection process between the various sons of Jesse, sheep farming magnate with a business based in Bethlehem. Now that's a place we've heard of at this time of year!

Samuel saw Jesse's son Eliab and said to himself, “This man is surely the one God has chosen.” But the Lord said to him, “Pay no attention to how tall and handsome he is. I do not judge as people judge. They look at the outward appearance, but I look at the heart.” 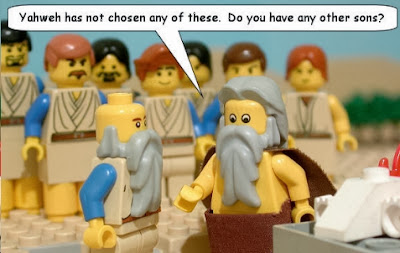 And Samuel said, “No, the Lord hasn't chosen any of these.” Then Samuel asked Jesse, “Do you have any more sons?”

Jesse answered, “There is still the youngest, but he is out taking care of the sheep.” “Tell him to come here,” Samuel said. David was a handsome, healthy young man, and his eyes sparkled. The Lord said to Samuel, “This is the one; anoint him!” 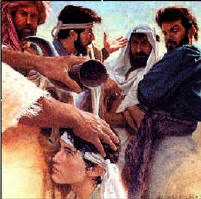 Thus begins one of the few highlights in the mixed and muddled monarchy of ancient Israel. Although David became revered as one of the heroes of the nation ... 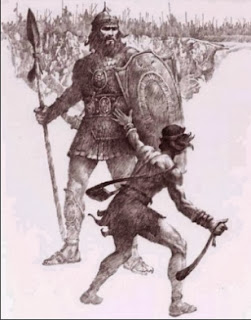 ... he was as fallible and flawed as the rest of them. It would take 12 months of blogs to review the biography of David. (Panic not, you will be spared such an ordeal!) Suffice it to say that, amongst loads of good stuff, Dave danced in a sexually provocative manner (in his undies!) in the streets and deliberately sent Uriah to certain death ... 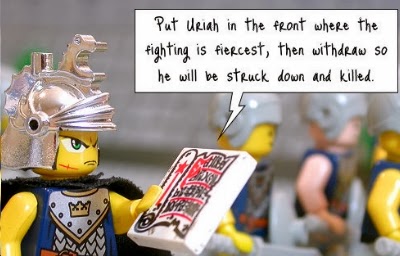 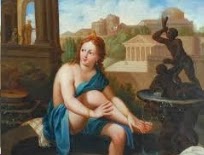 But there was repentance and forgiveness. 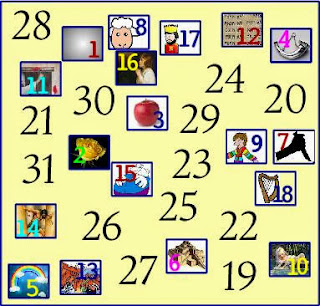 And one huge, huge link with Christmas.