Like the Isle of Wight, Seaton (Devon) has an elderly demographic, now increased by two with the arrival of fbb and Mrs. So it was that on Wednesday last your blog author and spouse joined a church outing. The instruction was to meet outside Woolworths (non-existent since Christmas 2008) at 1030! 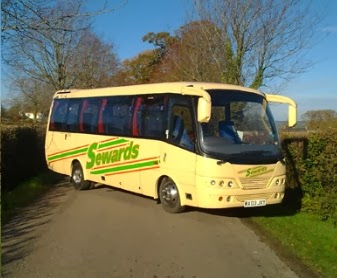 A coach from Sewards of Dalwood (near Axminster) duly arrived driven by Phil. As well as being married to the daughter of an ex minister of the church, Phil is the third generation now working in this family business.

We are based on the edge of the Blackdown Hills in East Devon in the village of Dalwood, just off the A35 between Axminster and Honiton. We pride ourselves in our fleet of clean, well maintained, comfortable & up to date coaches. Our smartly dressed team of drivers are knowledgable in all aspects of group travel and some have been with us for many years. The whole team is fully CRB checked and participates in regular training courses. 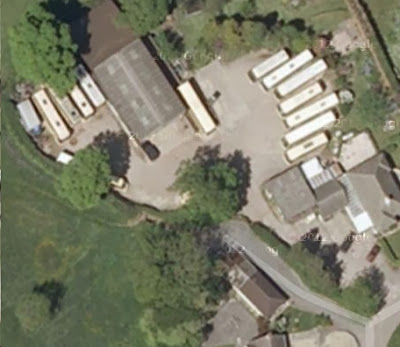 We have our own workshop and depot on site and all of our coach maintenance is carried out by our own mechanics, ensuring our coaches are well maintained throughout.

After a short drive, with excitement being provided by negotiating two huge Co-op delivery lorries (one on each side of the road outside the store) in the narrow Yonder Street at Ottery St Mary ... 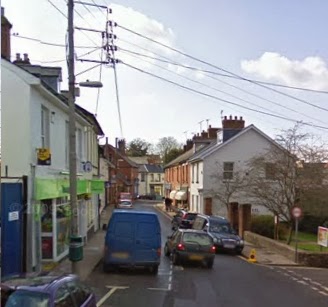 ... the party of old crusties was duly unloaded in time for coffee (not included) at about 1130. The fbbs no longer have a garden (hooray) so four hours at a Garden Centre (departure was as 1530; actually announced as 3.30 pm) did not incite much excitement. The highlight, however, was to be  pre-booked Christmas Lunch at 1230; so there was a significant lingering over the coffee. 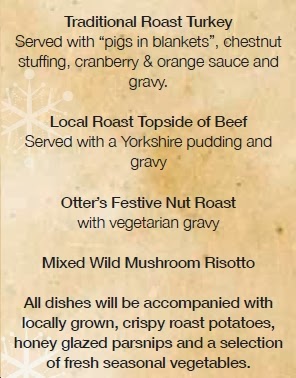 Food quantities were excellent, good enough for fbb (?); service was slow but nattering was the order of the day. Seating was cramped, some of the vegetables were tepid and the "crispy roast potatoes" weren't! Puds were excellent for quantity and quality (fbb enjoyed a gratifying feast of cheese) and the meal ended with tea or coffee plus a sliver of chocolate. But for a "mass meal" it was jolly good.

By the time the (leisurely) meal was over there were just 90 minutes to enjoy the delights of this particular brand of retail therapy. Do people really buy this stuff? 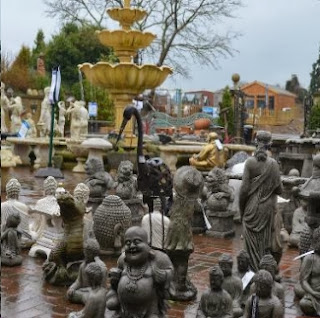 Mrs fbb bought a Christmas prezzy for young Archie Fearnley and fbb perused the reading matter, then sat on one of the display stone benches (chilly on the posterior) to read his "Morse" book, sensibly brought to fill the time.

And there was a rack of I-Spy booklets. A real blast from the past.

Many will remember that each I-Spy book covered a subject such as Cars, on the Pavement, on a Train Journey, etc. 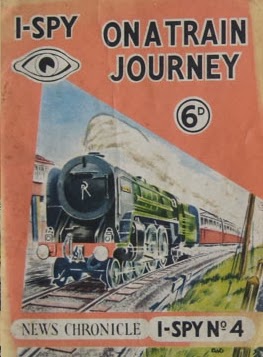 As children spotted objects such as manhole covers, oak trees, semaphore signals, fire engines, whelks, and so on, they recorded the event in the relevant book, and gained points. fbb well remembers sending of for his "tribe" membership and code book ... 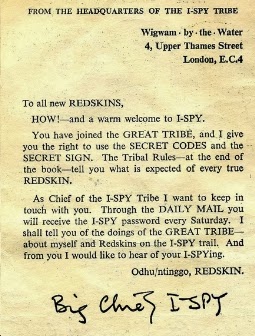 ... and the reply was signed by the Big Chief himself! The codes, by the way, were essentially simple substitution codes and trivial for the "big 'ead" youngster aged 7.

Once the book was complete, it could be sent off for a feather and order of merit. 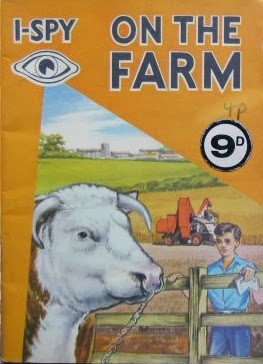 Little (?) pre-fbb never finished a book; boredom and a dearth of adventurous family outings led to a lack of ultimate completion success! There was also the suspicion that it was easy to cheat. Would the Big Chief be able to check whether there really was a village pump in the pretty hamlet of Wiskett Dreggles?

The original Big Chief I-Spy was Charles Warrell, a former headmaster who created I-Spy towards the end of his working life. He retired in 1956, but lived on until 1995 when he died at the age of 106. After Warrell's retirement his assistant Arnold Cawthrow ... 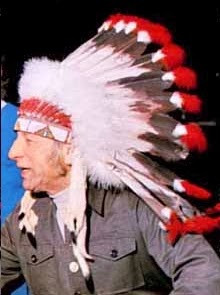 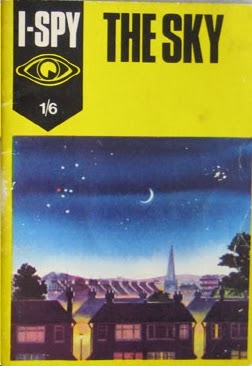 I-Spy books were relaunched by Michelin Travel Publications on Mon 7 Dec 2009 with 12 new titles and a further 12 in Spring 2010. 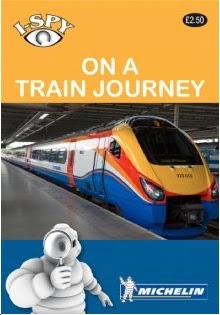 "The Bookseller" announced the new launch in its October 9, 2009 issue with an interview with Michelin Commercial Director Ian Murray. Mr Murray confirmed that the initial 12 titles will include I Spy Birds, Cars, Trees, On a Car Journey and On a Train Journey. The new I-Spy titles are faithful to the original concept but are fully updated and include all new colour images.

The price has inflated too. 6d in the 1950s should be about £1.10 today NOT the £2.50 cover price. To see the whole current range click (here). fbb has asked Santa to bring him some for Christmas and will doubtless blog a review in due course.

Should you wish to to visit Otter(y) Nurseries (one of  a growing chain in the South West), Stagecoach 4 and 4A (two buses every hour Monday to Saturday but no Sunday service) will drop you at the door. 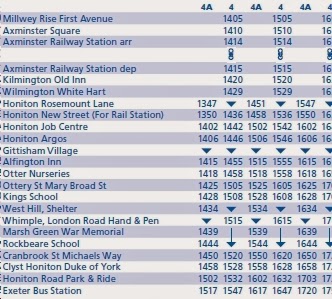 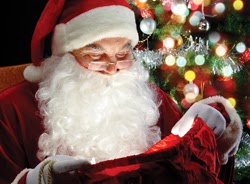 This year our grotto is bigger and better than ever, with exciting songs to sing-a-long too, interactive fun with our elves, and Rudy and Judy our singing reindeer. Iceberg adventures, Mrs Christmas's kitchen and Woodland walks there is something for all children to enjoy, as well as a present from Santa himself! Tickets only £4.99 per child, includes present and Santa's Fan Club sticker.

How good of God to make the world;
How odd of God to start with light!
In recent years, through science unfurled,
It now appears that God was right. 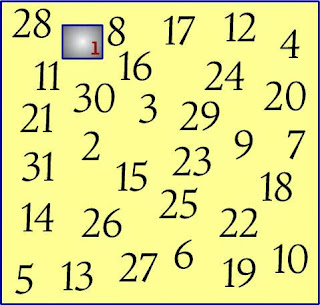 Although predicted by earlier theories, the origin of "everything" was first found accidentally as recently as 1978 by Arno Penzias and Robert Woodrow Wilson as they experimented with the Holmdel Horn Antenna, part of Bell Laboratories, USA. 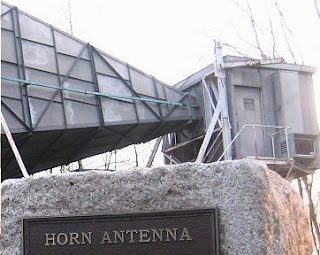 They proved beyond doubt that the Universe began expansively from nothing; began with light. The Bible reported thus at least 3000 years ago. "And God said, 'Let there be Light.'" 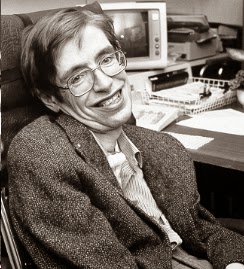 Professor Stephen Hawking has written that the Universe is there "because it is"; but he sees no need for God. He also writes (paraphrased), that God would have very little to do (with creation) as the Universe can only be like it is. Neither professorial opinion is particularly "scientific".

The wonder is that, 3 millennia ago, writers with no scientific knowledge to speak of "guessed" the truth; or were they "inspired by God." Whatever your opinion ... 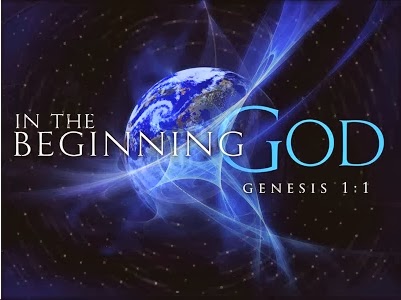