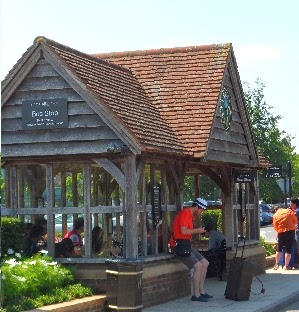 ... and a traditional phone box which might be pink ... 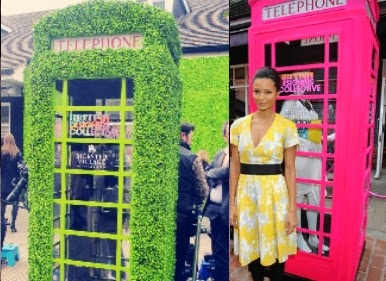 ... or covered with (plastic?) green foliage. But, sadly, it doesn't contain a phone! Equally sadly, that's about "it" for the English village atmosphere; and the phone box is plugging a trendy retail shop, the British Designer Collective.

Bicester Village is a huge "Retail Outlet" park just off the main road to Oxford. For those who, like fbb, really enjoy shopping at such places (!), here is a short taster:-
As well as the S5 (see yesterday's blog - read again) the other main route via Bicester is the X5, numbered thus, of course, to avoid confusion along the main Oxford Road. 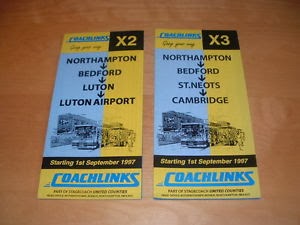 ... which were, effectively, jazzed-up bus services sticking to the main roads and omitting deviations to some smaller settlements. Coaches (mostly) provided the services with an occasional double deck. 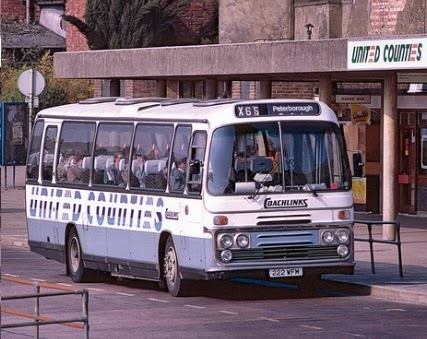 It is rumoured that, when the then un-bearded Brian Souter bought UC, he was so impressed with the concept that he used the idea to develop the series of "X" routes in Fife. The present (longer distance) network consists of:- 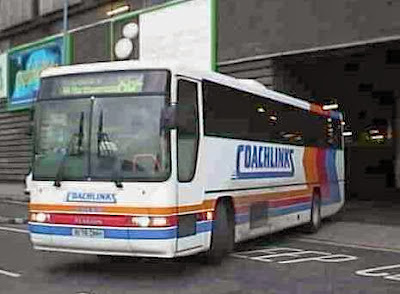 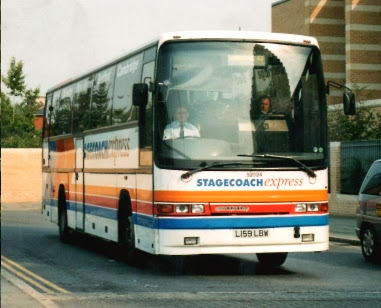 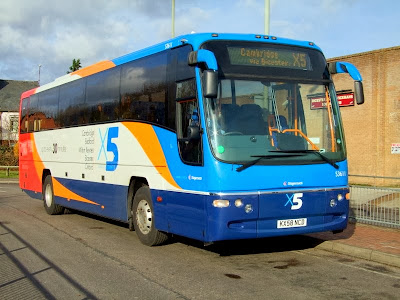 The X5 runs every 30 minutes Monday to Saturday ... 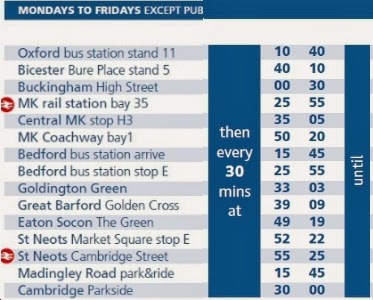 ... and stops at the Village although you need to look at the detailed local map to confirm this. 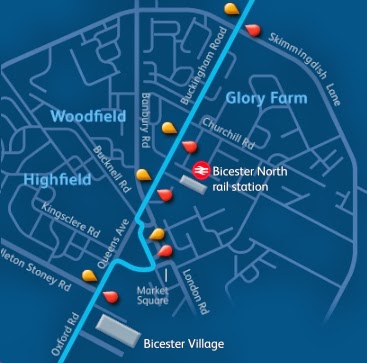 In fact the stop is not very convenient for the outlet shoppers paradise, involving a fair trek into the middle distance. 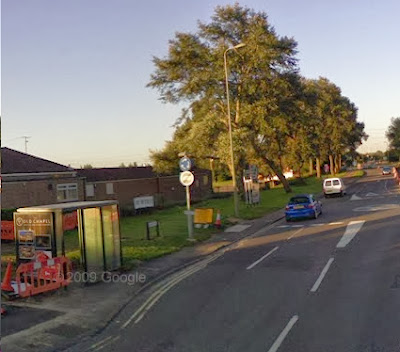 And, of course, despite the "current" on-line timetable, the X5 does not stop at Bure Place because the new town centre development at Bicester has obliterated the former bus stands. 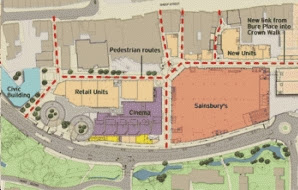 Pedestrianised Sheep Street runs across the top; Sainsbury's is the light orange block built on the former car park and the Vue Cinema is mauve. Buses now stop on Manorsfield Road which runs across the bottom of the picture. The designers of the scheme have provided passengers with a covered colonnade ... 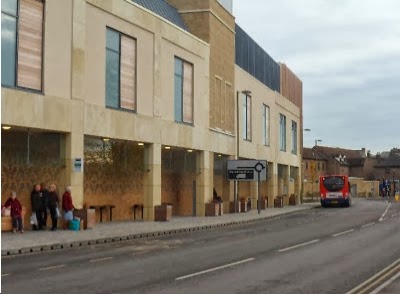 ... with extra weather protection from glass panels. The Stagecoach bus (above) is on Northampton Town Service 8 (and that's NOT a mistake) which, sometime early in 2014 (a slight exaggeration; in 2 hours 39 minutes) will arrive at the Rectory Farm estate on Northampton's eastern district. 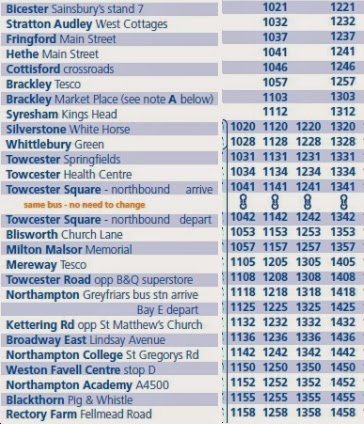 Here is an S5 waiting to depart for Oxford ... 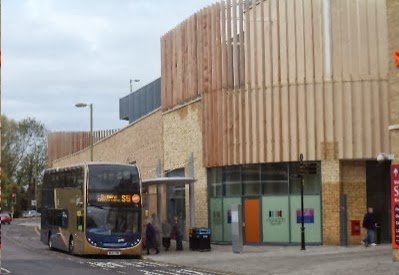 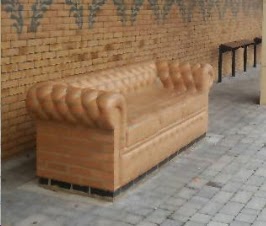 ... cast concrete! Cold and clammy on the coccyx!

Northampton correspondent, did not reveal any details of the quality of timetable information but confirms that there are electronic departure displays and this useful network diagram. 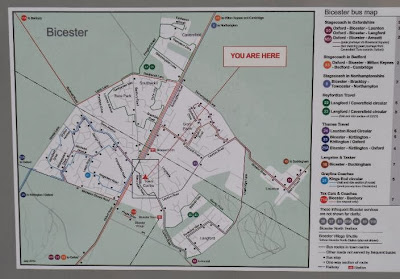 On more mundane but necessitous matters, Alan reports that toilets cost 10p but free "facilities" can be obtained in Sainsburys where there is also a more than acceptable caff!

In so many towns, bus stations have been bulldozed into oblivion, so it is encouraging to see an actual improvement. Whoever designed the Sainsburys block is to be commended for up-grading the waiting environment for the humble and oft-forgotten bus passenger. Well done whoever done it!

From a purely public transport point of view, however, free car parking in the new Sainsburys store may be a a discouragement to  potential bus users despite an improved waiting environment.
As Sainsburys provide "free" parking for motorised shoppers (not free, of course, but paid for from a nibble from everything bought in the store), how about a refund on every valid bus ticket? Public transport needs a level paying field. In a small way, those who arrive by bus are actually subsidising motorists! Now there's a thought for campaigners to campaign with.

And now, a P.S. If you are desperate to enjoy Bicester Village there are two daily coach departures from London, run by Evan Evans Tours. With pick-ups from your central London Hotel! That's coolsville! 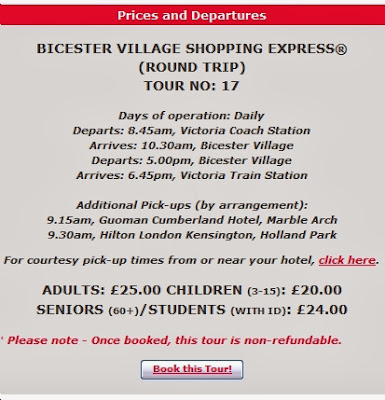 For a modest £25, this gives you only six and a half hours to spend even more money; surely barely enough time? Happy Cashmas everybody.

It was Joshua, son of Nun
And Caleb, son of Jephunneh
Who had faith and so got to the Land
That was flowing with milk and with honey! 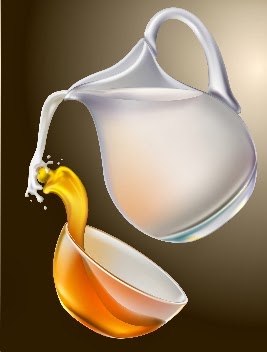 Another hard lesson for the Hebrews. Their recalcitrant behaviour, their failure to obey those 10 commandments, their descent into idol worship all ensured that God's punishment was meted out. Specifically, 12 scouts were sent out to spy the Promised Land. 10 came back warning of giants and terrors ahead; only two presented a minority report. Joshua and Caleb recognised the difficulties but were convinced that God would "go with them".

Joshua went on to take over Leadership from Moses. There was plenty of work to do before the hotch-potch of Hebrew tribes was setttled. And they needed a few doses of good luck; or is that God's luck?
If you disobey and refuse to listen, and are led away to worship other gods, you will be destroyed - I warn you here and now. You will not live long in that land across the Jordan that you are about to occupy. I am now giving you the choice between life and death, between God's blessing and God's curse, and I call heaven and earth to witness the choice you make. Choose life. Love the Lord your God, obey him and be faithful to him, and then you and your descendants will live long in the land that he promised to give your ancestors, Abraham, Isaac, and Jacob. 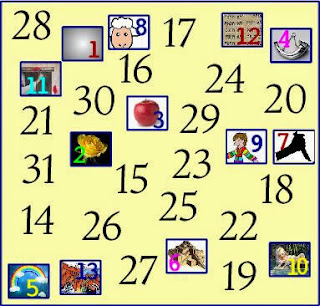 The quote above is from "God's" advice/warning to the Hebrews as they prepared to enter The Land.

Christmas introduces us, once gain, to that life or death question.