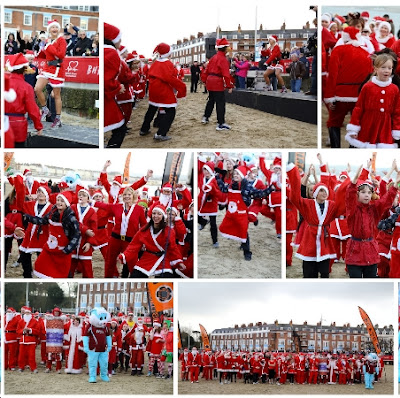 Don’t forget the 5k Chase the Pudding Dash
on Weymouth Beach this Sunday.

Not only did fbb forget yesterday's wonderful event; he never knew about it it in the first place. Still, there's always next year. But your overweight and elderly explorer was in Weymouth last Tuesday for the launch of six new buses for the town's local services. 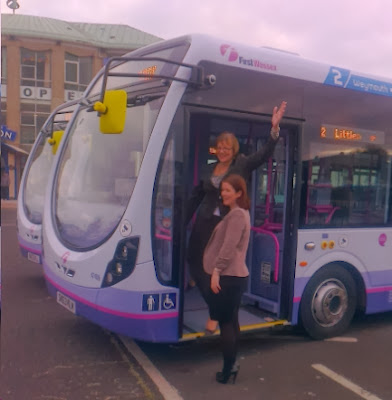 This took place outside The Pavilion which stands at the historic harbourside. 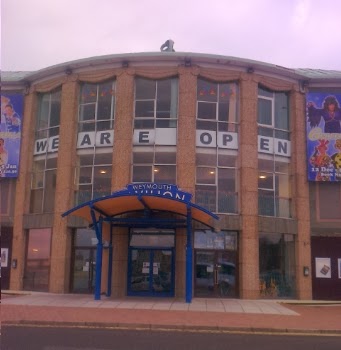 In September 1958, construction of a new theatre and ballroom began after being delayed by a great deal of litigation and argument. 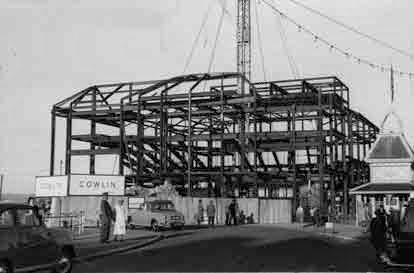 The ballroom was the first part of the venue to be opened. Over 1,000 people filled the floor that night, who later watched a display by dance professionals Harry Smith-Hampshire and his wife Doreen Casey. 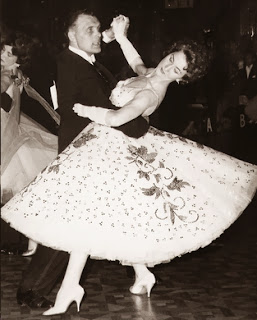 Their speciality in the Viennese Waltz was a vertigo-inducing finale of 64 bars of continuous Fleckerls at speeds of up to 84 rotations per minute! East your heart out, Strictly Come Dancing!

The official opening was delayed for a month until the theatre was complete and formally opened on 15 July 1960, with the show 'Let's Make a Night of It' starring Benny Hill. The new Pavilion was described as "Weymouth's most ambitious municipal enterprise" and retained the resort's reputation as a leading seaside resort. 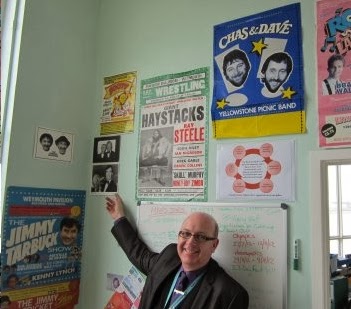 In late 2012, the council announced a threat of closure and possible demolition after stating the venue would cost too much to run in the coming years. It is now operated by the not-for-profit Weymouth Pavilion Community Interest Company.

And it served yummy cakes at the launch last Tuesday. 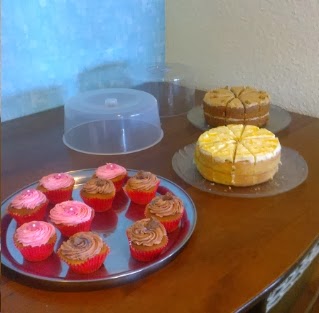 But we need to go back a bit further. 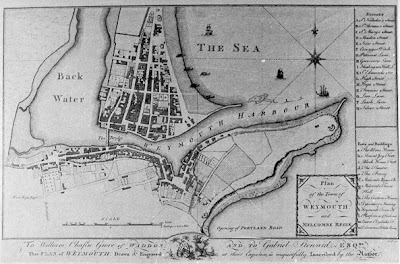 That spit of land in the 1700 map (above the H of Harbour) would become an important part of Weymouth's transport infrastructure. 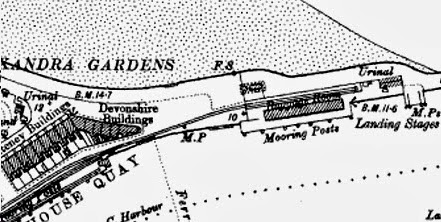 In 1865 a railway for goods was opened to serve Custom House Quay (bottom left) and 24 years later a passenger terminal was added. Note the urinal; in those days ladies were expected to burst! 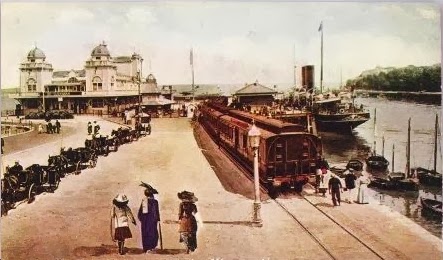 In 1908, the original Pavilion was added on reclaimed land. During a refurbishment project in 1954, the building burnt down. 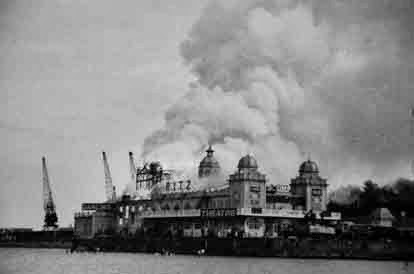 This represented a sad loss as the inside was truly spectacular. 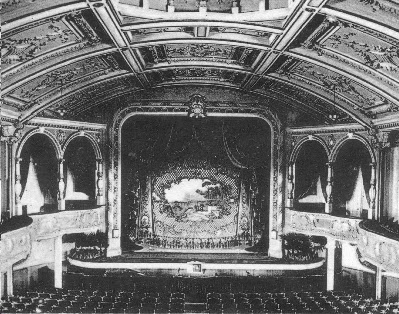 But, much as the history of the Pavilion is fascinating, it's the railway and ferry link that interests transport enthusiasts. A journey to the Channel Islands in 1902 was something of an endurance test. 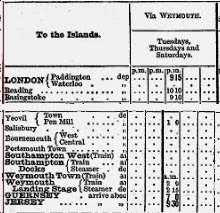 In the interests of fair and equable reporting, fbb should also add that LSWR also offered a route via Southampton docks; leaving Waterloo 35 minutes later at 0950 [corrected to 2150 as per ccomment below!] and arriving at the Channel Islands at the same times. This schedule was that for Mondays, Wednesdays and Fridays.

Today this Weymouth journey can be replicated on Mondays and Fridays only (Winter timetable) via SouthWest Trains and Condor. 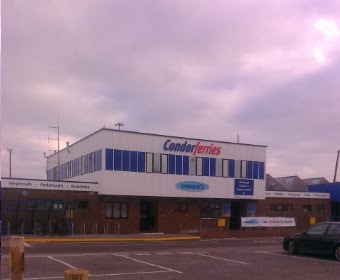 Ironically it can be slower than in 1902! On Mondays you would need to depart Waterloo at 0530, arriving Weymouth "town" at 0844. Thence taxi (or  plenty of time to walk!) to the harbour for the 1000 fast ferry, arriving Jersey at 1600. Now a splendid 12 hours and 30 minutes. Such are the benefits of modern transport. 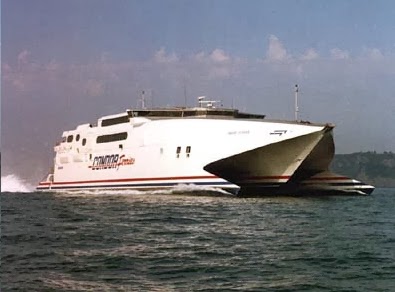 You could leave London at 0630 and save an hour; but a 20 minute interchange at Weymouth would be "inadvisable". If you miss the boat you would have to wait 'til Friday.

Tomorrow, we look a bit closer at the rail connection.

The story of Samuel, the last of the "judges" is another "Illustrated Childrens' Bible Story" faithful; designed to be sweet and "nice". Hannah is, according to the mores of the day, shamefully childless. She visits the temple regularly to prayerfully promote pregnancy. When the good news comes, she dedicates the boy to God, to work as High Priest Eli's gopher. 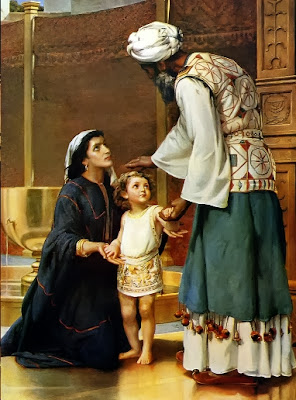 Eli and the whole God-worship scene is morbiund so, when Sam hears God's voice, he hasn't a clue what it is and what to do. After a bit of night-time misunderstanding, Sam responds to the call, "Speak, Lord, your servant is listening." 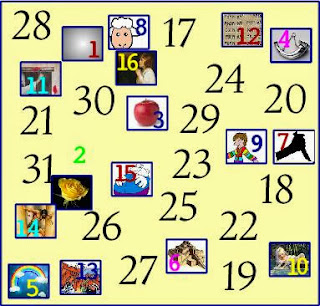 And that's where the story usually ends.

In fact, that's where the story begins. Because the little boy grows up. 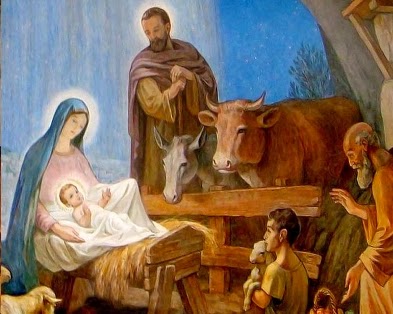 But the baby grows up!