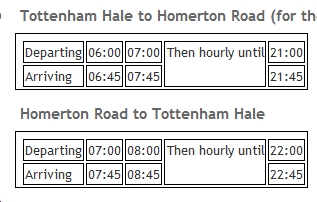 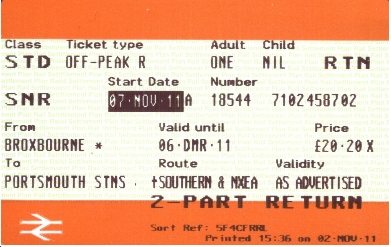 Sorry to spoil this debate - but I don't think there is an on-line discount for using Southern rather than South-West Trains. The simple fact seems to be that off-peak fares from Portsmouth to Broxbourne are significantly cheaper using the Southern route.

And a quick check with friend and fares expert Barry Doe, reveals that "Anonymous" is right.

Well, my vastly-superior RailPlanner, without any promoting, says 1015 via Waterloo and Tottenham Hale, arr 1259 and my vastly-superior Avantix fares CD, again without prompting, shows both any permitted (SWT) fares and the £20.20 'route Southern/NXEA' option. It all goes to show what I've been saying in RAIL (magazine) over and over; the web sites are useless and the time and money saved by paying a little for both RailPlanner and Avantix is well worth it! With Avantix you firstly see the cheapest fare THEN you can use RailPlanner by inserting 'use only Southern' or 'don't use SWT' or whatever to immediately get the times.
And Barry confirms that this differential has been available for at least the last 15 years. Still crazy, especilly as most country bumpkins on the Isle of Wight have never heard of the cheaper fare!

Understanding the Railways department:-
For those unfamiliar with services via Tottenham Hale, fbb has, at great personal risk to life and limb, created this diagram of the Monday to Saturday daytime pattern of service:- 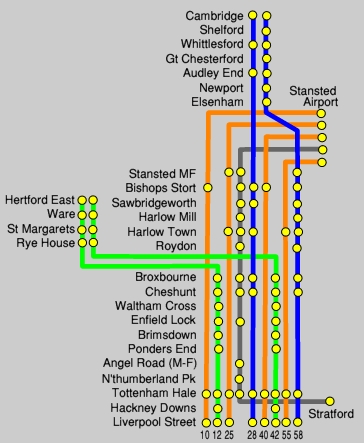 Evenings, Sundays and Monday to Friday peak hours are non-standard. Departure times past each hour from Liverpool Street are shown at the bottom.
Please note that "Stansted MF" is "Stansted Mountfitchet" whereas "Angel Road (M-F)" indicates that trains only stop there on Mondays to Fridays. Lest our worried readers may be concerned about the parlous service for the spiritually enlightened Angels resident in their epoymous Road, worry not. There aren't any. The station is totally surrounded by industrial units and can only be accessed by a long footpath from Conduit Lane at the top of the map. Access from Angel Road itself, the North Circular, is no longer provided. 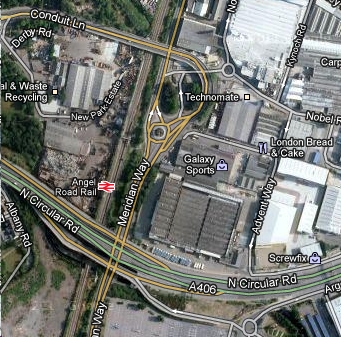 Back to Mrs fbb:-

Anyway, Mrs fbb is returning from her prayer and bible study week at High Leigh Conference Centre, Hoddesdon. She is commanded by the  lady in charge to assemble at the front door at 1330 where those offering lifts will be matched up with those requiring same. Mrs fbb's travelling companion perfects her "Le Mans Start" and grabs an early departure. They are at Broxbourne Station ... 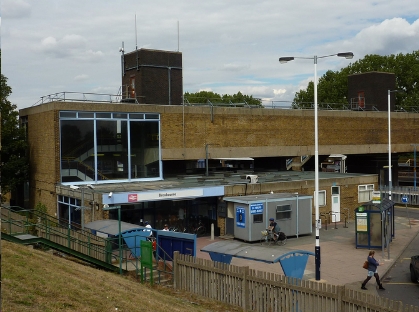 But, once there and as they make their way to the underground, a sign announces, "no down escalator, 99 steps." 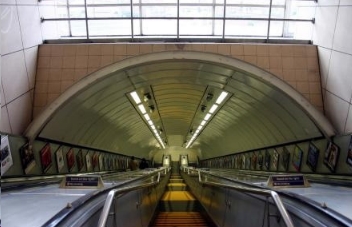 Not at all good for carrying heavy cases. In slightly smaller print were directions to the very small lift ... 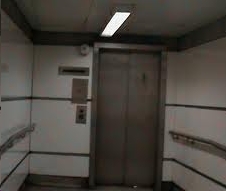 ... almost overfilled by Mrs fbb and companion, two cases and a third lady with a pushchair. Bet the steps and / or the lift present problems at busy times. The shiny new underground train (picture shows a shiny old train at Tottenham Hale) ... 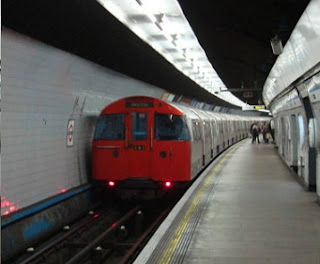 ... whisked her efficiently to Victoria for her (cheaper!) Southern Railway journey back to Portsmouth and the Island.

The rest of the journey was uneventful, but, yet again, the Southern Railway trolley-dolley rushed past seeking to avoid sales. Perhaps if they don't sell much, they will be able to withdraw the service, à la London Midland? Mrs fbb's lasso was used again and, rather than risking the vile coffee, she purchased tea and a kit-kat; much better.

Little did the "good lady" think that her simple (?) journey to Broxbourne would provoke such a fascinating (?) series of blogs.

For tomorrow's blog, fbb is indebted to the interwebnet for a farcical yet tragic Tottenham tale from the early 1900s involving a "tram chase". A fascinating but moving read.

Next blog : due Saturday November 19th
Posted by fatbusbloke at 06:48