For Better or Worse at Chatham

The downstairs but upstairs bus station. 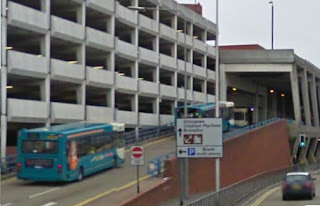 These buses are going up a ramp to use the former "underground" bus station in the Pentagon Centre at Chatham. It was not the most beautiful travel experience imaginable. 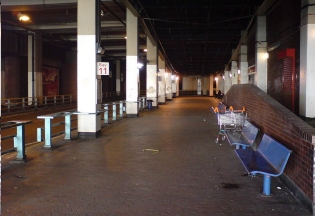 So a new facility had been built nearby but in the open air. 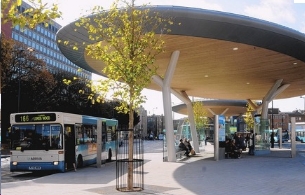 But the "Waterfront" bus station has not been a riotous success that the authorities had expected.
This, from the local rag ...
THE new Chatham bus station opened for business on Monday 13th October more than five months behind schedule – and it was still not ready. The controversial £7 million "dynamic bus facility" saw its first passengers off at 5.37am, but as the day went on, criticism of the long-awaited and over-budget station mounted.

Passengers expressed disappointment that certain aspects remained unfinished – including toilet facilities – or appeared to have been overlooked completely – including litter bins and, most worryingly, pedestrian crossings. Others slammed its open design and location in a "wind tunnel", fearing that as winter draws in, passengers will have little protection from the elements. 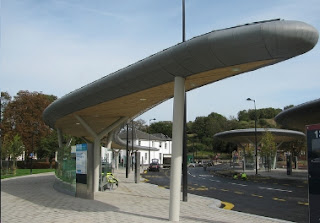 The development, which is part of the council's aim to open up the waterfront and connect it with Chatham town centre, was expected to open in April, but due to poor weather conditions and design changes, the delay – and the cost – continued to grow.
It replaces the outdated 1970s station inside the Pentagon Centre, branded as "one of the worst in the country" by Medway Council, which believes the new depot's opening marks "a significant step towards transforming and regenerating Medway".
Then Medway Council has been forced to compensate Arriva, the major user of the new station, in order to cancel their lease at the Pentagon. This has not gone down well with some colours of councillor.
A deal said to be worth hundreds of thousands of pounds has been agreed between Medway Council and bus operator Arriva, to ensure that there will be buses running from the new Chatham bus station when it opens next month. The agreement was voted through at a special council meeting on Thursday (September 15), where Medway Council will pay Arriva a fee believed to be about £300,000 to cancel their lease of the old bus station, based in the Pentagon Centre.
Labour and Liberal Democrat Councillors have blasted the move as a waste of tax payers money. Deputy leader of the Labour Group, Vince Maple said: “Arriva are part of Deutsche Bahn, a German company that made a profit last year of more than 900 million Euros!


The conservative response: "The Arriva discussions were long running over several months and we have reached the best agreement possible."


And the LibLab riposte: "The council have agreed to pay Arrive hundreds of thousands to remove them from the lease, and we see that as anti-competition and the other bus operators will resent that as well."
Then the swirly, draughty sluglike bit of the bus station with 13 stands isn't actually big enough ... 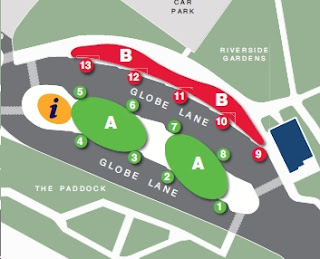 ... so some departures are from a less spectacular bit just along the road ... 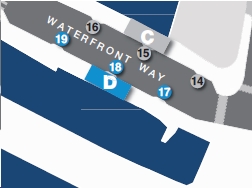 ... on Waterfront Way.
But the biggest fun (NOT?) is that the bus station has (will have??) "Dynamic Stand Allocation". As a bus approaches the bus station it will be electronically "scanned" and the computer will decide which stand is will leave from. No, this is NOT an fbb wind-up, honestly.
So Mrs Miggins, encumbered with bags of shopping, a buggy and a screaming child, is poised at Stop1, Stand A, for her bus to Snodland. 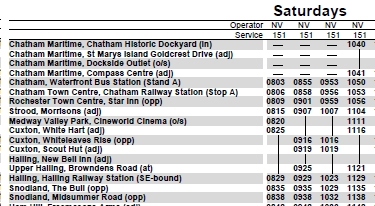 Departure time approaches; the computer dynamically re-allocates the bus to Stop 5, also on Stand A; the departure screens change accordingly (will they?) and Mrs M gathers her accoutrements and staggers breathlessly along the walkway. She drops a bag (it's the one with the eggs in and they break), the child vomits spectacularly and a wheel falls off the buggy, turning it into a near-lethal and uncontrollable weapon. 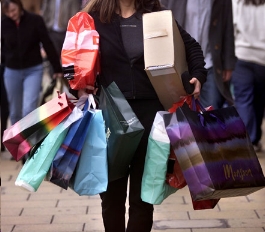 She misses her bus, dynamically.
Of course, it won't REALLY be like that, will it?


Next blog : due Tuesday November 8th