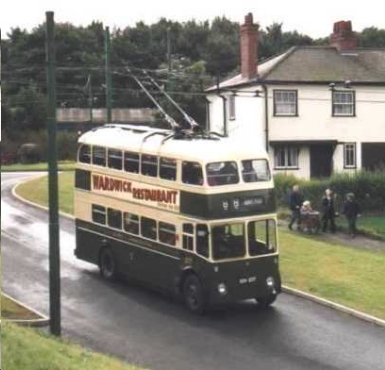 
In 1868, the Midland Railway opened its branch from Derby to Ashby-de-la-Zouch. It passed through largely rural; farming communities with stations at Chellaston and Melbourne amongst others. The line was hardly a top rate money spinner and it closed to passengers in 1930 and to freight in various stages from 1955 onwards. 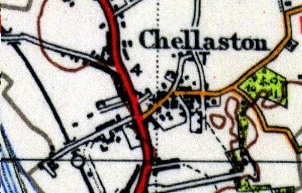 Nothing remains the station at Chellaston ... 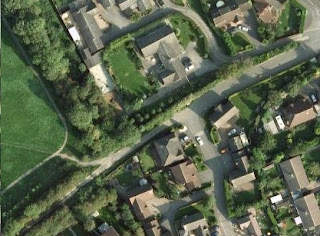 ... except a line of trees top left. Likewise, Melbourne can offer a footpath/cycleway and a small industrial estate. 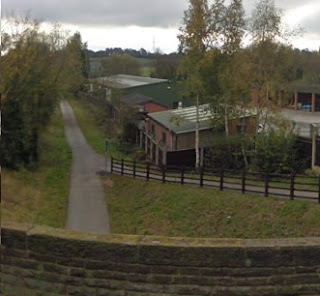 But in 1976, Derby City sponsored what they hoped would be a rival to the Birmingham Cross-City line. Two new stations were opened. One, Sinfin North, was "private" and located within the massive Rolls Royce aero engine factory; the other, Sinfin Central was available to the public and situated at the southernmost limits of the industrial complex. 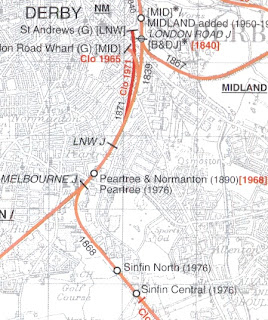 a clip from Col. Cobb's Historical Atlas of
the Railways of Great Britain.
Click on the image to enlarge.
Neither station was particularly close to the original village of Sinfin, or, indeed, the much extended post WW2 hosing development.
Yes, I remember Sinfin North –
The name; because one afternoon
Of heat the diesel-train drew up there
Unwontedly. It was late June.

The brakes hissed. Someone cleared his throat.
No one left and no one came
On the bare platform. What I saw
Was Sinfin North – only the name** 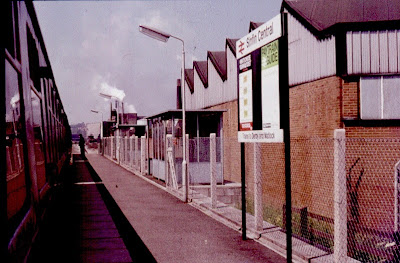 Neither station attracted the custom expected and the service was progressively reduced until in 1993 there was just one early morning return trip. This was replaced by a taxi when new diesel units proved technically unsuitable for the branch. Under privatisation, the line passed nominally to Central Trains who never ran a train to Sinfin.

Despite protests, as here from "The Independent"  of Monday 23rd February 1998 ...
THERE is a train service where passengers recline in leather seats, chat with the driver and get dropped off at their destination's door.


It is not a futuristic vision of Britain's rail service, but the story of the taxi ride that masquerades as the 6:48 morning train from Derby to Sinfin, an industrial suburb of the city. And, if the fat controllers of the private rail network get their way, its journey could be over for good.


Today, public hearings start to close the branch line to the two stations in Sinfin, a three- minute, two-mile journey from the centre of Derby, which costs £1.20 and for more than four years has been served only by a taxi replacing the scheduled service.


Although the taxi takes longer, the chief benefit for the three regular users is that they do not have to walk from the station - the taxi takes them all the way to their workplaces. One is dropped at his factory at Peartree, a stop half way down the line and the two remaining regulars are driven right to the door of the Rolls-Royce plant.


The downside is that the service is only one way. Returning in the evening they have to walk and take the bus - or a normal taxi at £3.20.

fbb wonders whether the project was a decade or so ahead of its time. Derby "suburbs" Shelton Lock and Chellaston have expanded significantly and trains could have been extended to Castle Donington and East Midlands Airport along existing tracks. But sadly, it was not to be. 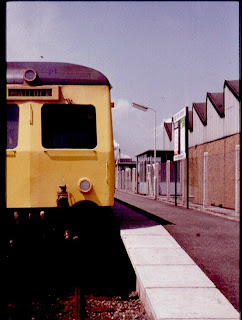 THE END
** Poem extract (with apologies!) based on "Adlestrop" by Edward Thomas. fbb and pal rode the line, soon after opening, on a train timed for the middle part of the day. No-one boarded, no-one alighted and the train returned empty, save for the chubby one and his less chubby chum, back to Derby.


Next blog : due Saturday November 5th
Posted by fatbusbloke at 01:31