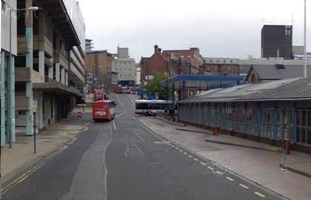 Just a reminder that 47s and 48s run frequently northwards to Shiregreen then, apparently, plunge into  a wormhole to reappear south of the City centre at Highfield travelling in the opposite direction towards Herdings.

Nonsense. And as a bonus (?), the 48 does NOT, by any stretch of geographical imagination, serve any part of Norfolk Park!

Stop FS5 is opposite Stand A at the Sheffield Interchange and is the best that SYPTE could offer for prestigious Optio Orange service 120; note, no seats, no shelter, no "real time" information; just a pole with a few bits stuck to it. And, despite getting it wrong in a previous blog, fbb is reminded that this is the closest stop on offer for folk arriving by train and intending to travel westwards. 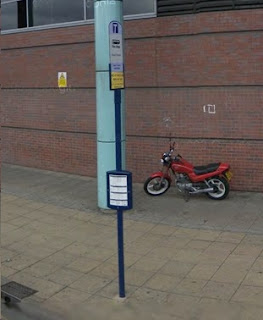 Just past stop FS5, a little beyond the Stagecoach bus in the top picture, are stops on Flat Street, the oddly named (i.e. not flat!) hill alongside the former red brick Post Office Building on the right in the distance. These stops are designated "Sheffield Centre" on Travel South Yorkshire's delightfully dubious database.
So, let us go on-line and look at the departures from stop FS5. 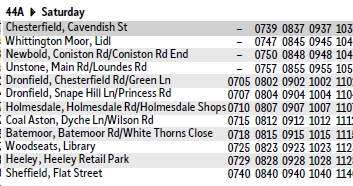 Stagecoach service 43, 43A, 44 and 44A are arriving from various routes linking Chesterfield and Dronfield with Sheffield. Whilst they DO stop at FS5, their City terminus is Flat Street. Here is one there, looking back towards FS5 a few yards beyond the traffic lights. 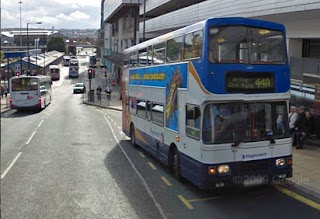 Because the computer (or more truthfully, the nerd who writes its program) is mindless, it offers us four pointless journeys an hour from FS5 to take us just one stop beyond.

Even fbb could manage to walk approximately 200 metres between the two! Effectively FS5 is an alighting stop for the Chesterfield routes offering a slightly tidier interchange for passengers with onward journeys from the bus station. 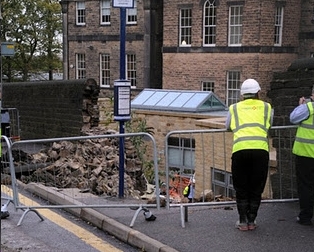 But there is some good news for service 120 passengers braving the blasted heath of stop FS5 (although, as with the 43/44 routes, most sensible travellers would walk up to Flat Street where the 120s "wait time"). The service to Fulwood and Crimicar Lane is diverted via Western Bank  away from a road closure on Glossop Road due to a collapsed wall and pavement.

Sadly this congratulatory contribution cannot extend to other services from stop FS5 as we shall see tomorrow.

Next blog : due Wednesday November 9th
Posted by fatbusbloke at 03:06