Timetable-less Timetables?
fbb is in total disagreement with their aims but feels, in the interests of independent reporting, that he must document the efforts of N.U.T.S. (The National Union of Timetable Secrecy). Under the enthusiastic oversight of its dynamic President, Boris (The Blue) Johnson, the "nutters" have made considerable gains in their avowed aim to remove all bus timetable information from the public. 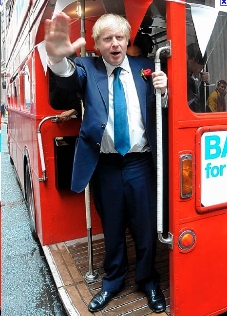 The President of N.U.T.S. acknowledges applause for

Nationally, bus timetable books have almost completely disappeared; bus enquiry offices are as rare as the Yeti and the latest success for Nuts is now apparent in Cumbria. Here its "Getting Around" comprehensive timetable book disappeared in 2007; but a joint effort with Stagecoach showing at least all the main services has continued to be widely available.
Until Nuts gained a political foothold, that is.
This, distributed recently by the Council.

Cumbria County Council announces its Winter Bus Timetable
The winter guide [to the main bus services in Cumbria] this year will be quite different to the usual format and aims to inform readers about the range of transport services available across Cumbria and to signpost them to new ways of accessing more detailed information. The County Council is very much progressing the provision of electronic based information using, for example, websites and I-apps, and the promotion of such initiatives will be very apparent in the new guide.
The main change to its content is that it will not contain any bus timetables.
And this, from Stagecoach in Cumbria ...

As Cumbria County Council will not be producing a winter timetable booklet this year, we are producing leaflets for services as follows [e.g. 555]:- 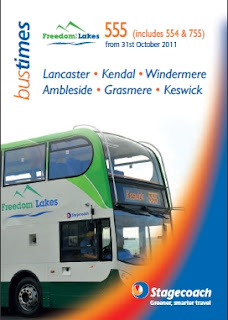 So, a response from at least one Tourist Information Centre ...
"The Cumbria Rider magazine is the only comprehensive paper guide to bus services in Cumbria; it is very popular with our more elderly residents and essential for our visitors.(we give out an estimated 300 of each edition, the library also gives out lots.)
"I must admit that I had to re-read the email several times as I could not quite believe that the bus timetable magazine was no longer going to have bus timetables in it!!
"The people who come in for the magazine either cannot use the internet or are on holiday so do not have access to it; those who could use it cannot even be sent to the library for access as it is hardly ever open. I am really concerned about the effect that this decision will have on the TIC and Library (both single staffed in winter) in terms of cost and workload.
"We simply cannot afford to be printing dozens of timetables off the internet; lots of our visitors want information on all routes available before they decide where to go. We will also end up making dozens more phone calls to Traveline (again at our expense).
"I was under the impression that CCC wanted to encourage people to use public transport? but are no longer prepared to give any information in print on how to do so?
"Please can you send me a telephone number for the person who made this decision in preparation for the deluge of complaints my staff are going to have to deal with in the TIC when the new guide arrives."
fbb's final thought?
The new timetable without timetables, clearly a good way of saving costs as it will be easy to keep up to date, was due to be published "at the end of October". A recent check on the County Council's web site revealed an offer of a download (of the Summer edition?) ... 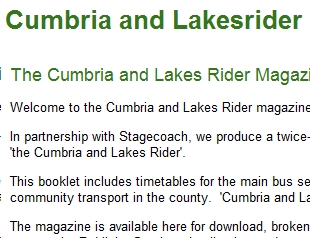 ... sadly a pointless offer as no such download could be downloaded. No mention of any alternative. 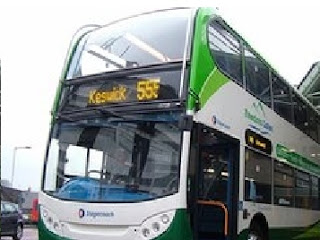 P.S. Enjoy a publicity pic of a new Stagecoach bus on the service 555. You could enjoy a ride; IF you can find out when the buses run.


Perhaps the next money saving scheme will be bus routes without buses?

Next blog : due Wednesday November 2nd