A Guest Blog from fbb''s chum, Alan:
With occasional comment from fbb!


Substitute "we went a-cruising" for "we joined the navy" and have a sing-along here.
Billy Connolly famously quipped, "Going on a cruise is a bit like being in prison with the added option of drowning." So fbb is pleased to publish some discontinuous extracts from Alan's recent blog; perhaps to redress the balance. 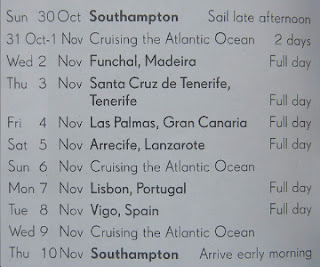 Our cabin has an enclosed (not glass fronted) balcony but it is much larger than we expected and is not inset like the glass fronted ones so we can see forward and aft and down at the sea. (They saw the sea.) 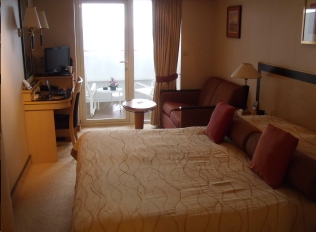 The cabin is nice and roomy, with more room at the end of the bed than other ships we have been on. We are allocated a nice dining table near a window (with a view of the sea). 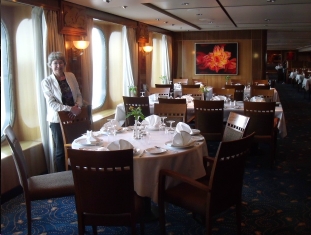 We are now through the Bay of Biscay which was pretty rough with force 6 winds Jack took a pill on Monday which made her very sleepy!


We have seen a couple of shows now (as well as the sea) and are not too impressed so far. The singer last night was pretty poor and we hope the Royal Cunard 'Viva Italia' showtime is better tonight. The Entertainment Director makes us laugh: but for all the wrong reasons.

Just got back from leaving 'Viva Italia' before the end (there was a natural break when the scenery broke): it was decidedly mediocre!

After 2 days at sea swimming, exploring ship, snoozing, (seeing the sea), and of course eating we are looking forward to visiting Funchal in Madeira tomorrow. Today exploring became eating when we accidentally found ourselves in the Ballroom during afternoon tea.

Now, this is where fbb gets really interested. Apparently on Cunard ships food is available on demand 24/7. Some cruise companies have an hour or so early in the morning when everything is closed. 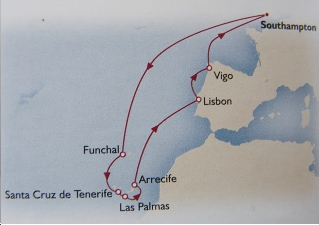 After two days at sea (seeing the sea) it was nice to finally make landfall in Madeira. Not so nice was the VERY heavy rain! We ventured off the ship to look around Funchal but the weather very soon beat us and after sheltering from a very heavy shower in the cable car bottom station ... 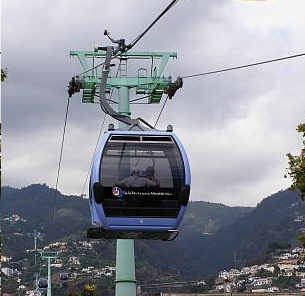 ... we decided the cloud would not clear so we returned to the ship for lunch ... 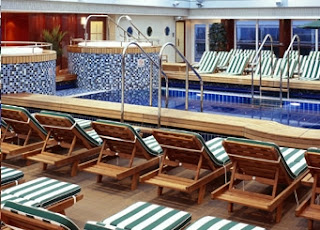 ... and a lazy afternoon by the inside pool.  (Not quite olympic sized; more like a large bath?) 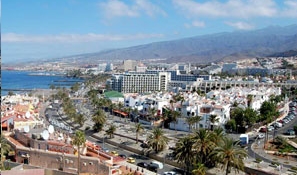 Next, a very busy day in Tenerife where the weather was much more kind to us; hot and sunny! Early breakfast and off the ship to explore the bustling town of Santa Cruz. Found an excellent market area to browse around but it's really just a Spanish town and not a tourist place. Back to ship to find all buffet food is being served by crew. We knew this meant the dreaded Noro virus was on board!

So as well as seeing the see you can be trapped and at risk of a virulent disease. Sounds like fun.

After lunch we went on an organised tour to the foothills on Mount Teide – the 3718 metre volcanic mountain in the centre of the island. Very interesting seeing the lush pine forests turn into a moon-like landscape of lava fields. We had a great view of the summit from the National Park at a pretty high 2000 metres. (makes a pleasant change from seeing the sea; much better!) 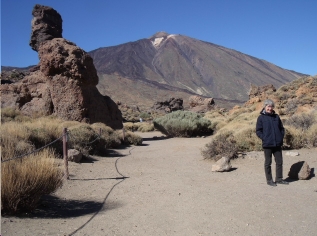 On return to the ship the Captain explained that a number of passengers (our stewardess told us 38) had Noro virus symptoms and we all had to be careful!


Nice dinner – little unsettling when one of our companions got up half way through saying he felt unwell – 39 now?


Show was David Copperfield who was excellent. We had previously seen him on Celebrity Solstice, (another cruise ship), and the show was absolutely identical – even the ad libs! (So they weren't, technically, ad libs?) But it was still entertaining and highly enjoyable.


Thanks, Alan, we get the picture. For the rest refer to Alan's blog (read here). Clearly, this cruising lark is very much a matter of taste. Alan and Jackie have become keen converts, and, despite the odd hiccup (or even throw up?) they really enjoy the experience. 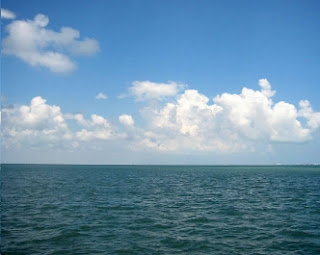 For fbb, the prospect of  seeing nothing but sea for four days out of nine might bring on a touch of insanity. Of course the antidote to all that sea would be ample opportunity to stuff for even more ample nosh into fbb's already ample form.

Food is excellent - there is always a roast joint at lunch for Jackie. It would be nice to have vegetables served by waiters at dinner in the restaurant like P and O rather than all on the plate from the kitchen. The food quality however is very good, but choice a little too fancy for us sometimes.

Next blog : due Sunday November 13th
Posted by fatbusbloke at 10:54