From Home to Hoddesdon. 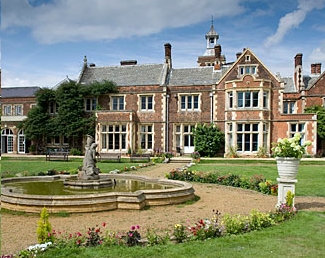 It was Mrs fbb's prayer and bible study conference last week. It takes place at High Leigh Conference Centre at Hoddesdon, Hertfordshire. Mrs fbb goes by train.
So begins the battle for the best value fares. Note that these enquiries, as illustrated her, are for a future date; the confuser won't allow you to ask for the past. 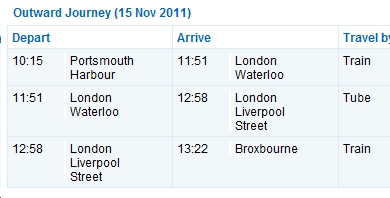 The obvious route is via Southwest Trains to Waterloo, bus to Liverpool Street (rather than tube; less hassle) and National Express to Broxbourne. 3 hours and 7 minutes ...

... a reasonable fare which includes old codgers discount. But can you do better? Southern Railway offers the following schedule ... 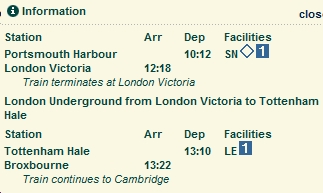 ... at 3 hours and 10 minutes; this despite a significantly slower run from Portsmouth into London Victoria. The "catch-up" is because the schedule from Victoria is via Underground to Tottenham Hale for connection with the train to Broxbourne.

fbb owns up! His plan was to route the Mrs by service 11 bus from Victoria to Liverpool Street, stupidly forgetting the Victoria line. One very bad house point, self awarded. The rail company journey planner advice was much, much better.
So it's even-stevens for journey time. Then you investigate fares. Southwest Trains £31.95 ... 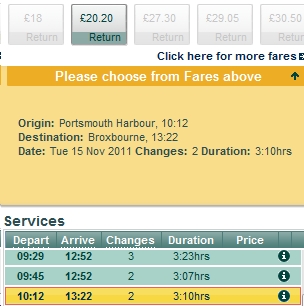 
Are today's rail fares daft or are they really daft? How many "normal" people would have guessed that the "long way round" would take almost exactly the same time as the "direct" route, yet would be 30% cheaper? How many people have the time and patience to tip-tap on the laptop for an hour or so to sort it out.


AND : The Southern Railway discount is only available on-line. Fair trading, NOT.

Mrs fbb's only comment about the Southern Railway journey was that the trolley-dolly rushed through the coach in an apparent attempt to avoid selling anything. Fortunately the Mrs had brought her ever-useful lasso and was able to haul the non-sales sales person back. The coffee was expensive and vile, served with only one tiny pottle of milk. 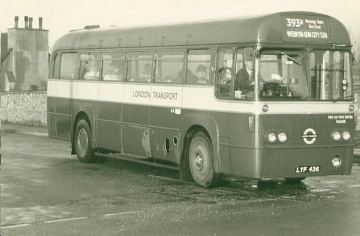 a no longer extant service from Broxbourne
But the journey was smooth and faultless. Once at Broxbourne it would have been nice to catch a bus to Hoddesdon; there is an hourly service 392 ...

... but the service 323 only runs at Monday to Friday peak times. 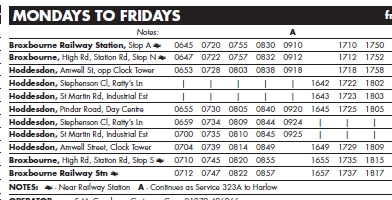 Likewise the other routes on the Hertfordshire map (323A and 341) only have the occasional peak hour trip to / from Broxbourne Station. The SB1 (Sainsburys Bus 1?) runs on Wednesdays only. 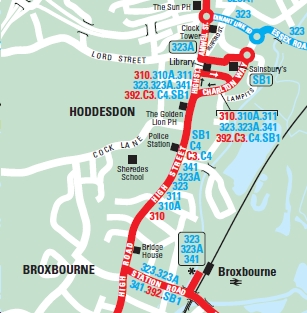 So it could have been a luggage encumbered lumber to the end of Station Road for a 310. 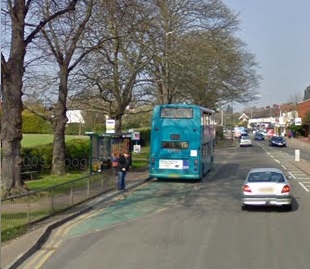 This service runs every 12 minutes ... 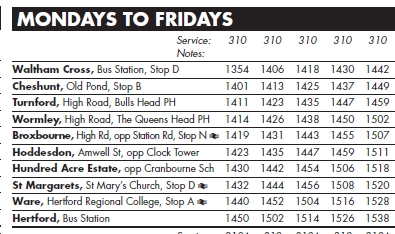 ... and would deposit Mrs fbb at Hoddesdon clock tower. 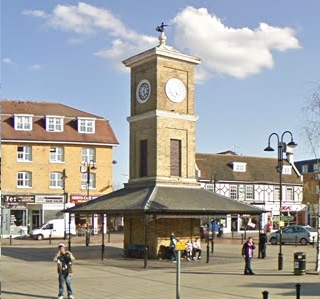 But whatever route Mrs fbb had chosen it would have involved lengthy walk up Lord Street ... 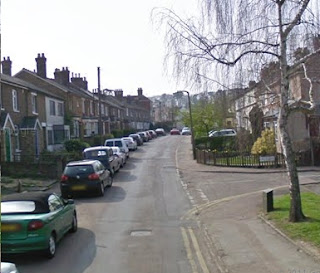 ... to the Conference Centre. So it was a taxi; no meter, just a standard "flat fare" of £6. Mrs fbb had one travelling companion and collected another stray at the station, so £2 each was "as cheap as chips", and porbably not much more than the bus fare.

And the oft-maligned railway system did just what is should do, namely convey its passengers efficiently and cost-effectively.

Three cheers, then, for the rail system, three boos for the silly fares situation and a really loud and reverberating raspberry for disgusting coffee at a disgusting price.

Incidentally, both Mrs fbb and her chum travelled all the way from the Isle of Wight to Hoddeson and back (including the passenger ferry) for under £60, somewhat less than the cost of a ticket for the car on the ferry. So no car running costs, no depreciation to add in, no super-stress driving very slowly round the M25. A blissful bargain.

Next blog : due Tuesday November 15th
Posted by fatbusbloke at 02:40