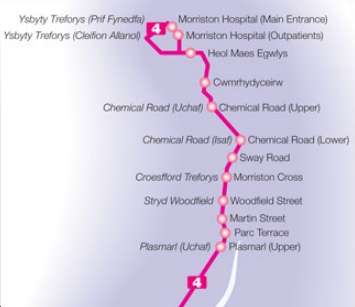 4As and 4Bs provide facilities to the Parc Gwernfadog estate ... 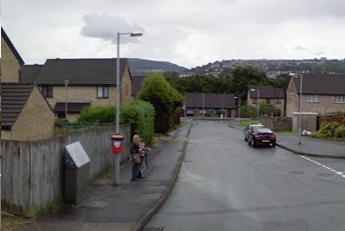 ... where they don't seem to bother with anything like stops and shelters. But working out what goes where is not easy. The only network map fbb could find was on First's web site and looks like this:- 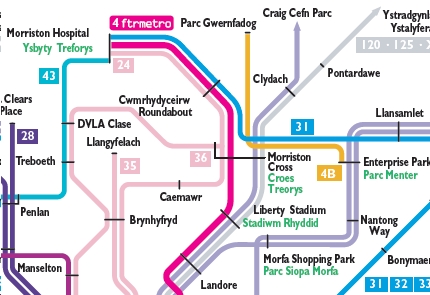 Apart from being unhelpfully diagrammatic and out-of-date (the 4B does not run to the Enterprise Park any more), there is no 4A.
So the only source of infomation is First's timetable. 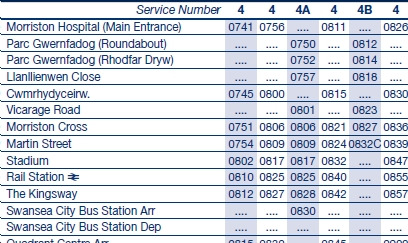 We know about the ftr 4; so the 4A and the 4B run from either Swansea or Morriston to serve the Parc Gwernfadog estate. Delightfully straightforward. So, we hear you cry, "What's the problem, fbb?"
Cwmrhydyceirw! (Pronounced "come reader ky roo", roughly, but with an "h" sound between the "r" and the "e" of "reader") ** 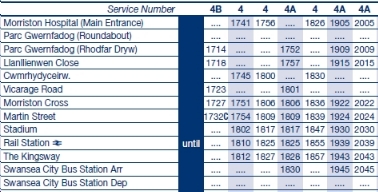 Not a welsh swear word but a suburb of Swansea. The 4 goes that way but the 4A and 4B run via Vicarage Road. Except in the evenings when the 4A runs to Morriston Hospital via the estate but misses both Vicarage Road and Cwmrhydyceirw.
Apparently?
So, you've got it, haven't you? The evening and Sunday 4A is a different 4A from the Monday to Saturday daytime 4A. And the 4B and both 4As seem to  avoid the Parc Gwernfadog roundabout when running TO Swansea. That esoteric timetabular point could best be explained by a good map but it's just too involved to describe in words. 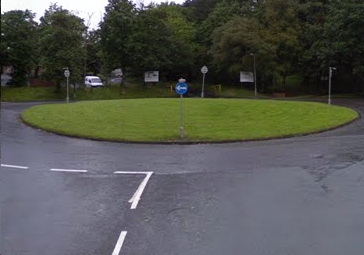 The roundabout, as we all know, is one of the highlights of any trip to South Wales. Look at that excitingly blue keep left sign; a real thrill!
By now you may well be totally confused; wonder what the fuss is about or have simply lost the will to live. But fbb guesses that, unless you do happen to be a Morriston Mensa member, you haven't a clue what goes where.
So herewith an fbb map... 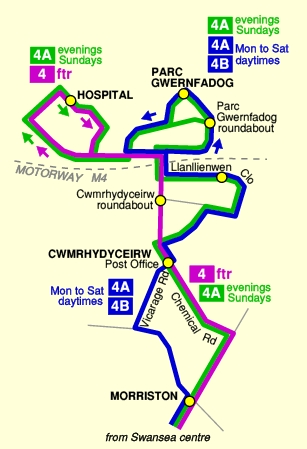 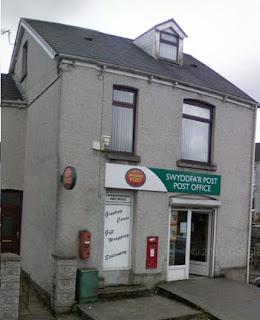 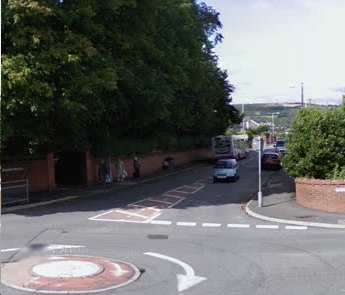 ... and there's one doing so. But evening "green" 4As eschew the delights of Vicarage Road and use the deliciously named Chemical Road instead. That's the same way as the "pink" ftr 4s in case you had forgotten. 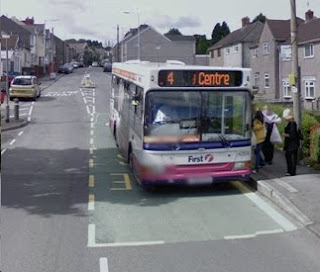 And just in case you thought that you had got it all sorted, this is a non-ftr 4 on Chemical Road. That's because it's Sunday and the daytime buses are numbered 4, although not ftr, BUT they actually follow the 4A route; that's the "green" 4A, not the "blue" 4A, of course. Or it might just be an old pre-ftr picture.
To Summarise, using the colours on the fbb map:-


Monday to Saturday daytimes : "pink" 4 ftr via Chemical Road
DIRECT to Morriston Hospital
Monday to Saturday daytimes : "blue" 4A and 4B via Vicarage Road
and a one way loop round Parc Gwernfadog
Monday to Sunday evenings    : "green" 4A via Chemical road
and Parc Gwernfadog to Morriston Hospital
Sunday dayimes identical to     : "green" 4A (as in the evenings)
but numbered 4 to confuse everybody.$$
Of course the OBVIOUS answer is to have three clearly defined routes by renumbering the "blue" 4A as 4B because they both use the same roads. And, of course, make ALL Sunday buses 4As because that's what they are. 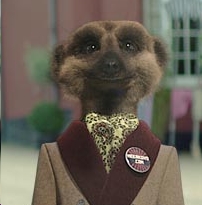 seemples
$$ : Is it possible, muses fbb, that Sunday daytime buses, although following the route of the "green" 4As, are actually operated by ftr vehicles, and are thus called 4s because that's part of the ftr brand? That would make them "pink" 4A ftr. More confusion.

Time for a lie down in a darkened room.


** The English translation of the name Cwmrhydyceirw means "the valley of the stags' ford" which gave rise the name of local pub "The Deer's Leap". However, the name of the village is corrupted from its original: "Cwmrhydycwrw" - a reference to the frothy ale-like appearance of the local stream ("cwrw" meaning ale). It is likely that the name was changed when many Welsh chapels promoted total abstinence from alcohol.


Next blog : due Saturday November 26th
Posted by fatbusbloke at 04:34