And so to Torquay and the home of one Giles Robin Fearnley Esq who runs a few buses here and there. There was a delicious lunch combined with much cooing and clucking from Mrs fbb at the delights of baby Georgina and a modicum of bus chat from fbb about the sadness and gladness of things in Cornwall. Then an afternoon expedition was instigated; to Babbacombe. 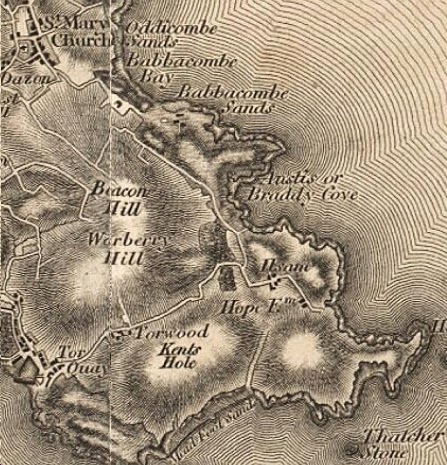 Back in the mid 1800s, when the Ordnance Survey was preparing its "first series" of maps, the quay on the Tor(re) was a small fishing village of no great significance to any other than its hard working residents. Over the rugged and inhospitable moorland to the north was the village of St Marychurch. Anstis (now Ansteys) Cove, Babbacombe Bay and Oddicombe Sands were relatively inaccessible beaches at the foot of perilous cliffs. 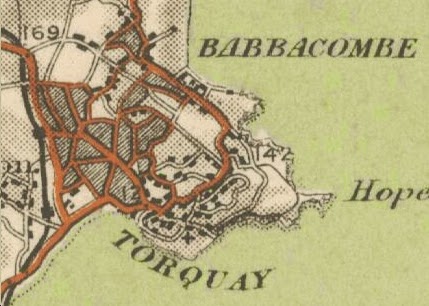 ... with Torquay and Babbacombe splurging over the higher land to create the modern seaside resort.

fbb has two memories of Babbacombe; one being holidays there taken by a "mature" maiden aunt with "the girls" in the late 50s and early 60s. Two was a passing visit with the fbb children on their way to a holiday in Cornwall. As a break from motoring a visit was made to the Model Village (web site here); which went like a house on fire! 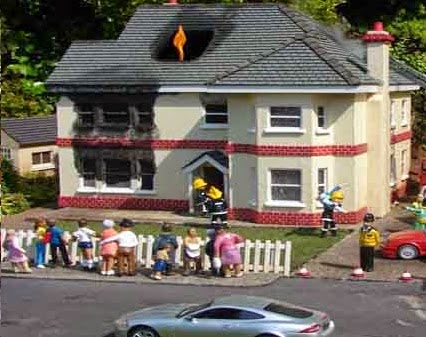 The chosen destination for Saturday 27th September (the day after purchasing a book on funicular railways) was ...

... the Babbacombe Cliff Railway. Which, as its name suggests, leads to Oddicombe Beach! 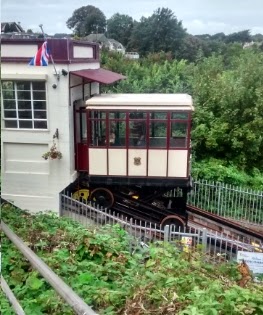 A scheme was proposed in 1890 but rejected by the worthy citizens of Babbacombe, probably as such a garish attraction would impinge on the seclusion of this isolated spot. But the Torquay Tramway Company had another go and the service began amongst much civic jollification on 1st April 1926. This makes it the last-but-one of the UKs traditional cliff railways to open. 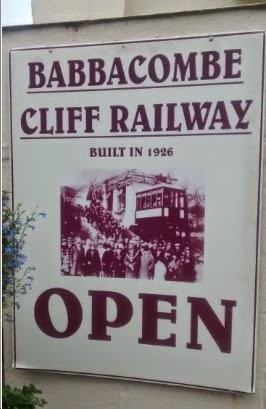 The opening was duly recorded on camera ... 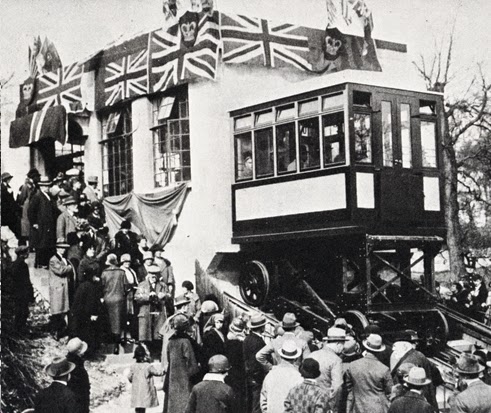 ... but the camera lies! This is a picture of the 2006 re-staging of the opening for the 80th anniversary. How come? The original 1926 cars had seven window bays on the side ... 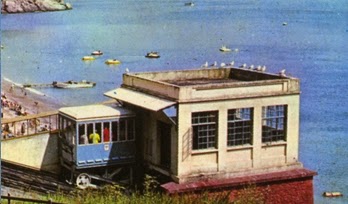 ... the modern cars have five. And it tells you the truth in the guide book!

In 1935 Torquay Tramways was taken over by the Corporation and the railway (and the beach) were subsequently closed "for the duration". The line was reopened in 1951 and fettled up in 1955. Another refurb scheme was instigated in 1993 but ten years later the line faced possible closure. A full rebuild in 2005 was the precursor to the lines' being handed over to a Community Interest Company in 2009. 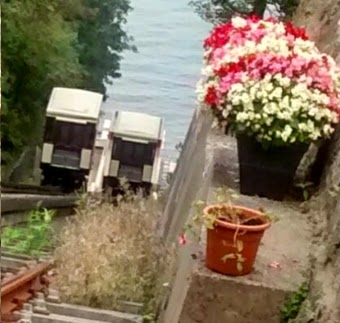 The ride was typical of the kind, smooth and faster than fbb expected. The cars are "driven" from the top; a task which requires the consummate skill of pressing the "go" button. Modernisation has made for near automatic operation once the doors are closed. 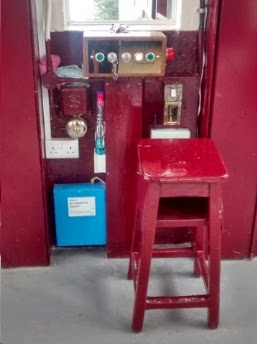 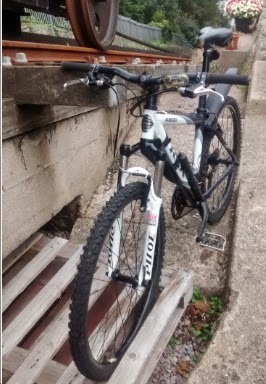 Also noted, but not recorded in the guide book, was that the base station started life as an open girder structure of (fbb presumption) reinforced concrete ... 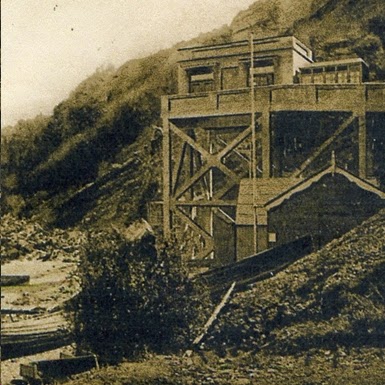 ... later replaced by something much more solid. 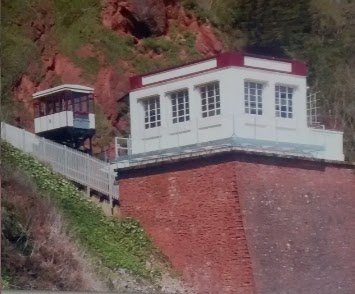 Storm damage earlier in the year caused havoc with the beach cafe (not yet re-opened but replaced by temporary "mobile" vans) and a small Cliff Railway museum. The fbbs strode purposefully along the mini-prom, having been exhorted to do so by this notice. 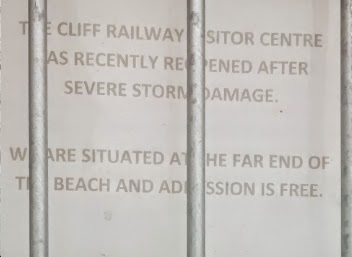 But only disappointment ensued! 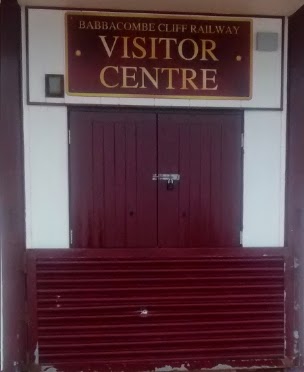 Despite this setback, fbb understands the the opening hours and dates of the railway itself have been extended and numerous and varied special events ... 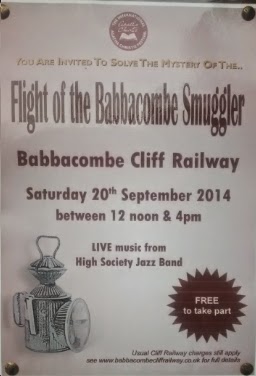 ... are held throughout the season to promote and popularise the pretty people-mover. 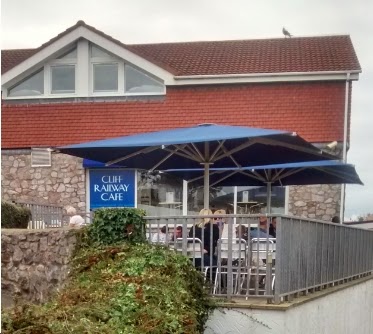 After a brief stroll the fbb/Fearnley party returned upwards for refreshment alfresco at the cliff top caff, where scrummy ice creams were consumed with gusto, a tube of which was available on every table. Here granny and young Archie eagerly await their glacial treats! 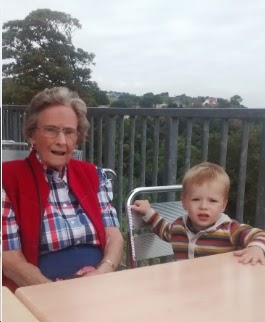 And so back to Newton Abbot station for the train eastwards; noting, on departure, the Cliff Railway's preference for mirror-image signage. 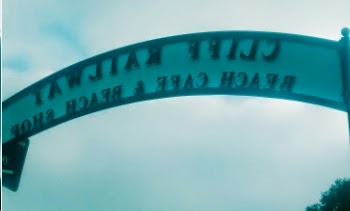 Much more information is available in the excellent guide book available at the upper station. 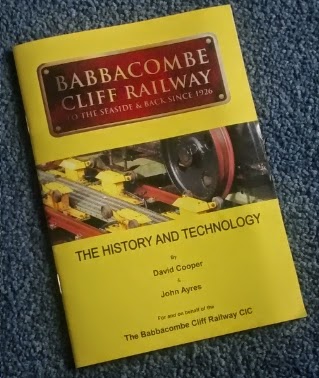 A splendid visit and truly serendipitous after the previous day's purchase and subsequent blog! Another funicular to cross off the list.

The railway's web site is (here)


Next bus blog : Monday 6th October
Posted by fatbusbloke at 02:00