Make up Your Mind, First Bus! 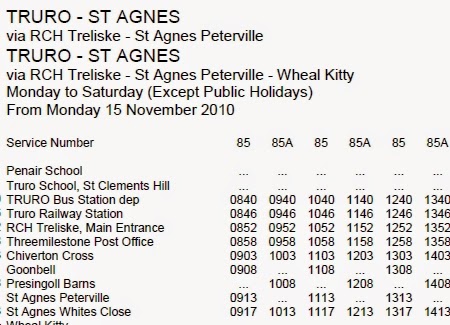 The timetable (above) shows it as running alternately via Goonbell and Presingoll Barns. The original "Barns" complex ran into financial difficulties in 2010 and closed in 2011. 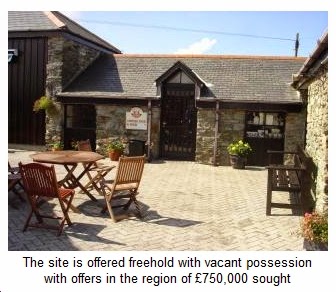 The site now trades as "Morgans", named after the family who, presumably, bought it. 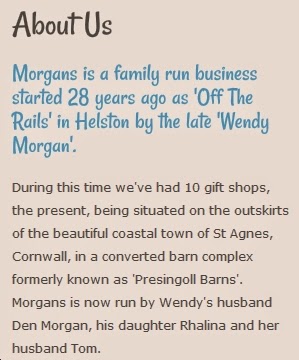 In fact, services 85 and 85A ran alternate ways round at loop at St Agnes, either outwardly "direct" or via Goonbell. Noting the withdrawal Cornwall Council was happy to advise ... 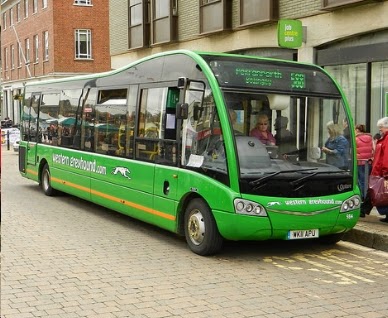 In a typical burst of incometence, First Bus merely repeated the Cornwall text on its own web site but gave no information about the 588, despite referring to it "below". There was nothing "below"!!

As it turns out, this omission by First is probably sensible as the 588 veers off-piste at Chiverton Cross and does not serve Goonbell, St Agnes or Morgan's (ex Presingoll Barns).

The 588 no longer runs as such but has been linked with the Wadebridge to Truro route and now operates as WG's 594. 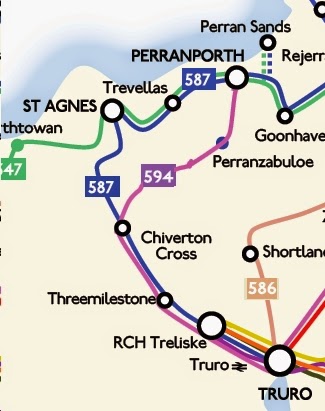 Perran Sands (dotted lines top right) may sound like a vast swathe of sandy beach, golden in the Summer sun, with azure breakers rolling in, ridden majestically by bronzed hunky surfers and watched by their bikini clad escorts BUT ... 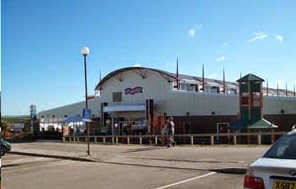 ... it's actually a vast caravan and chalet site! 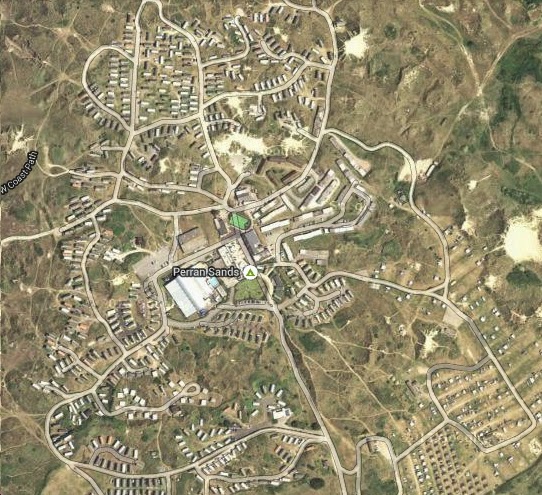 If you are still with us and still taking the tablets (?), you will remember that, from 3rd November, (just a year after pulling out of St Agnes!) First Bus will start their own route 87, in competition with WG. 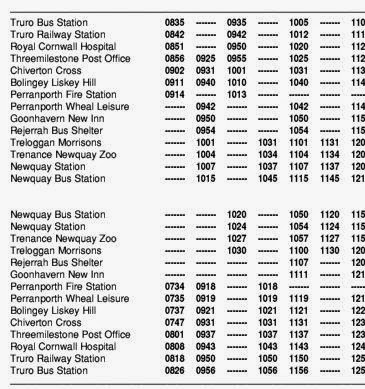 But it doesn't run via St Agnes; between Perranporth and Truro it is more like the 594.

But WG is not totally safe in St Agnes; beware another intruder as we shall see in due course. A new Bolster monster is ready to pounce on the nice green buses; but perhaps not quite as monstrously as First.
--------------------------------------------------------
Still Waiting
fbb is still waiting for the promised pictures from last Monday's party celebrating one year of First's "Star" routes in Portsmouth. Meanwhile, Hampshire County Council is also a bit slow at keeping up-to-date. On their web site we have ...

There is an interactive bus map, details of special fares offers etc. etc. all trendily branded.

About ZIP. With its own dedicated bus lane, the ZIP corridor has built-in bus priority – and that means reliable journey times for all your trips between Clanfield and Gunwharf Quays. Because buses go first on the ZIP corridor, taking the ZIP 8 route lets you beat the traffic queues, avoid the stress of driving and say ‘no’ to the cost of petrol and parking. You can plan your journey too, for greater freedom and flexibility, with reliable travel information on board, online and direct to your mobile.

And it must be up-to-date because of the copyright notice!

Zip had begun to disappear from the buses over a year ago, but the brand was formally replaced by "Star" from 20th October 2013. So only a year out, chaps - and counting.

With less than two weeks until they start, First in Cornwall's web site has (at last) announced the new services outlined by fbb just over a week ago.

The routing of new service 91 follows the same routing as existing service 90 between Newquay Bus Station and the A392/A3058 Quintrell Downs Roundabout and between the A30/A39 Carland Cross roundabout and Truro Bus Station in both directions " service 91 is routed between the A392/A3058 Quintrell Downs Roundabout and the A30/A39 Carland Cross roundabout via A392 East Road, A392 road, White Cross, A392 road, unclassified road (St Columb Road level crossing), St Francis Road, Chapel Road, unclassified road, B3275 road, A30/B3275 junction and A30 road.

Thanks for putting it so clearly, First!

The on-line map is, of course, hopelessly out of date showing the service 88 which finished at the start of September. New services 90 and 91 don't go that way (as is explained so succinctly above). 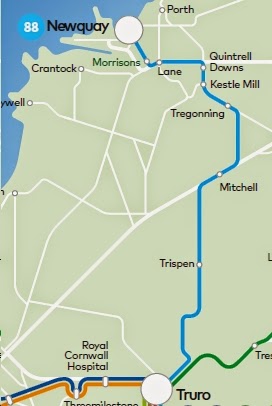