Bus operator First Hampshire celebrated the first birthday of its Star services on Monday (20 October) with the news that in their first year of operation, the Star buses have carried more than three million passengers. This represents a 12 per cent rise in passenger numbers over the year.

The 26 buses in the Star fleet that went in to service on routes 7 and 8 on 20 October last year, replaced the ZIP-branded vehicles that had been running on the A3 bus priority corridor from Waterlooville and Clanfield to Cosham, Portsmouth city centre, Gunwharf and Southsea since 2005. 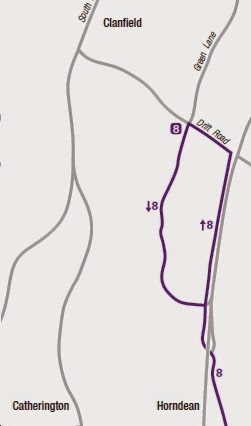 To be pedantic (from fbb, surely not?) the Zip brand only applied to the former service 41 between Portsmouth and Drift Road Horndean, oddly and historically called Clanfield by the various bus oerators. Clanfield village was only served at peak times. This became service 8. The other bit of "Star" (from Southsea to Wecock Farm Estate) was never branded as such. The "Zip" buses found a new life on Southampton's service 3, branded innovatively as:-

Meanwhile, back at the party ... 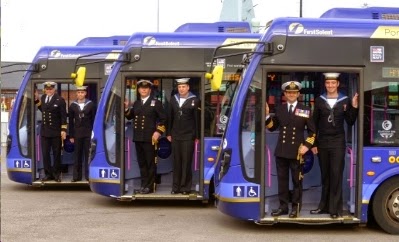 Three of the iconic buses, HMS Victory, HMS Diamond and HMS Lancaster, all named after Royal Navy ships, took pride of place at the celebrations in Portsmouth Historic Dockyard. HMS Victory (the ship) was to be celebrating Trafalgar Day the following day (21 October) ... 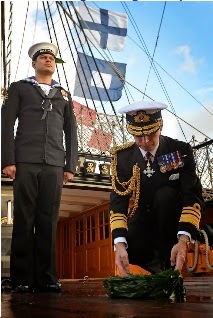 ... with the traditional on-board service and flying of the signal "England Expects That Every Man Will Do His Duty." 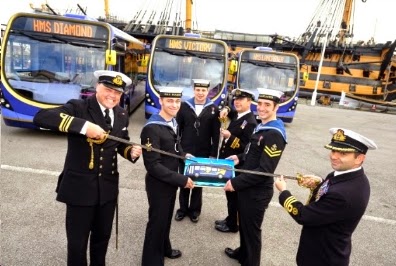 There was also a ceremonial cutting of a specially designed Star fleet cake to celebrate both the first birthday and the three million passengers who have travelled on the Star fleet. 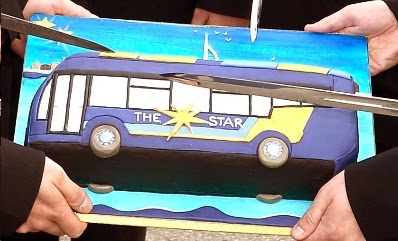 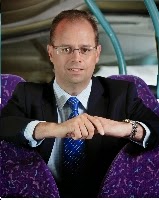 Marc Reddy, Managing Director of First Hampshire, Dorset & Berkshire, said: "This is a proud day for First and our partners, Hampshire County Council and Portsmouth City Council as we celebrate a real success story." 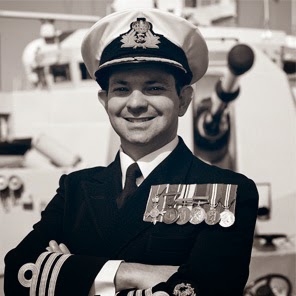 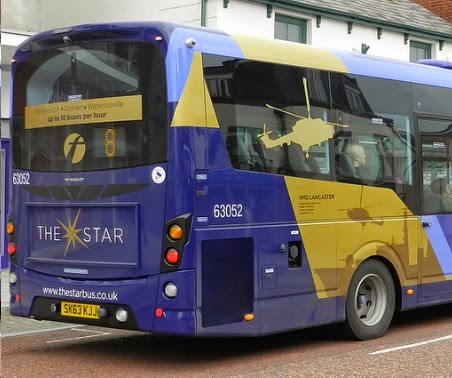 I think it's a great way of recognising the maritime heritage of Portsmouth, and the continued relevance of the Royal Navy today."

It would be tedious in the extreme to rehearse the sound bites uttered by the local politicians. Hampshire's Sean Woodward ...

... waxes lyrical about infrastructure improvements, most of which are adapted from those introduced for the original Zip scheme. But shelters and stops have been upgraded. Needless to say, however, no timetables are displayed at stops, merely departure lists.

Ken Ellcombe for Portsmouth City has less to say about infrastructure improvements because there weren't any! 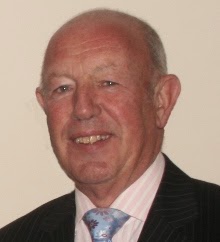 His sound bite was, "It is great to see a first-class service like the Star running in Portsmouth, particularly one that reflects the city's naval heritage so well. First has worked hard to create an attractive service and had a positive impact in its launch year."

We may smile cynically at these dos, not open to the public or even invited hangers-on (like fbb - sour grapes eh?), staged purely for PR. But this particular celebration emphasises much that is good with today's bus industry. Shiny new buses, well equipped bus stops (well, in the Hampshire bit, anyway!), WiFi and positive links with "The Community". Our cynicism may be extended to a realisation that all this "improvement" has just one simple purpose, to swell the bank balance of First Bus and increase (?) dividends to its shareholders.

But that's business. And we all voted for the late Nicholas Ridley's privatisation scheme -

The demolition of Greyfriars Bus Station
from earlier this year.

Work to take the Greyfriars building down, brick by brick, will then begin. This demolition work is scheduled for completion by the end of 2014.

When demolition is complete, the site will be available for redevelopment for retail or associated use.

Cllr David Mackintosh, leader of Northampton Borough Council, said: “Greyfriars is beyond repair and its demolition opens up a very large and significant site in the town centre for new investment and redevelopment."

He went on to say that the £4 million cost of demolition would be recovered by development of the site.

Except that the original developers have pulled out and there is no-one to pay the bill which will fall on the council tas payers of the town.

But That was Then : This is Now! 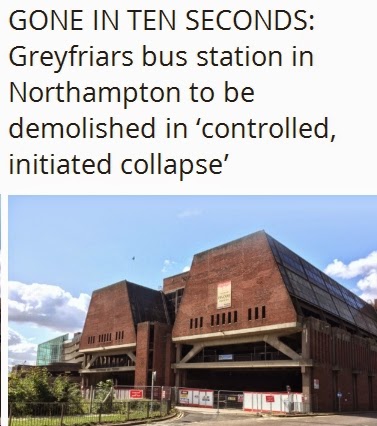 The company in charge of the demolition, DSM Ltd, said that bringing the 1974 building down ‘brick-by-brick’ as originally intended, would be too costly and time consuming. Instead, a ‘controlled initiated collapse’ will take place on a day before the end of March 2015, the firm has revealed. The process will bring down the building within its own footprint in a matter of seconds.

They're going to blow it up!


Councillor Mackintosh said the cost was justified as the former bus station was “an obsolete, unsafe building” that was blocking the regeneration of a key site in Northampton. The overall cost of the scheme has now increased to £5m.


The building was only in poor condition because the owners (Northampton Borough Council) did'nt bother to maintain it. Think how much maintenance they could have bought for £5 million. 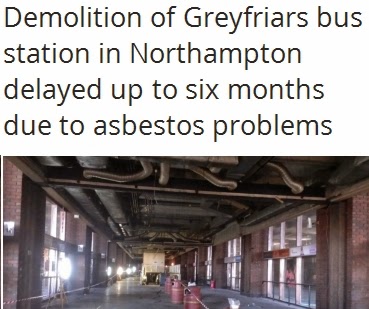 “The costs have increased as the time of the demolition has lengthened and the asbestos was found,” he said.

You might have thought that the owners would know what was in their building!

“What we are clear about is that the benefits for the town will be the release of that site. The extra money is justified in order to do this.”


Next bus blog : Sunday 26th October
Posted by fatbusbloke at 02:00