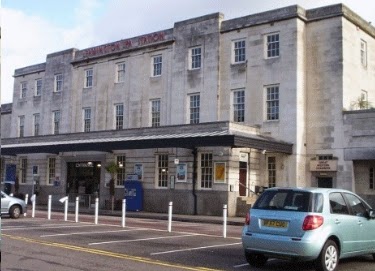 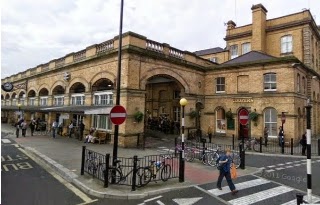 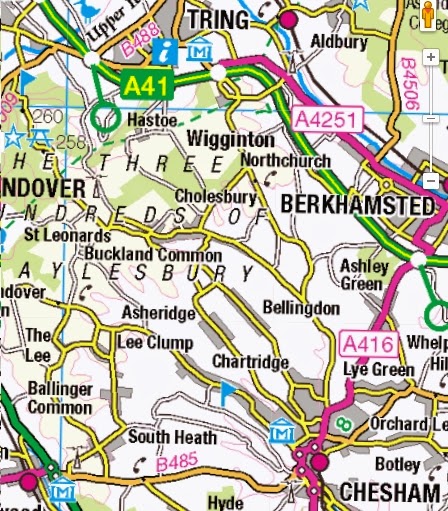 Great Missenden is the red station dot in the bottom left. 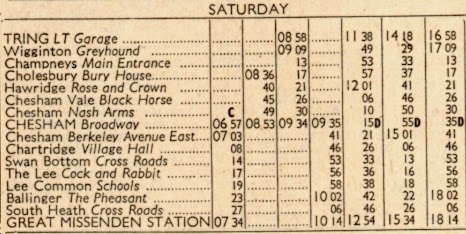 ... shows route 394 as running from Tring to Chesham via Cholesbury erratically and continuing equally erratically to Great Missenden. And there is a time point for Ballinger, more correctly Ballinger Common. 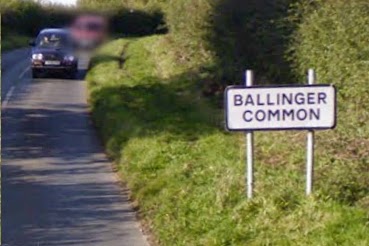 By 1975, successor operator London Country were only running a 394 between Tring, Chesham and Chartridge.

Todays route from Tring to Chesham is the 194, having lost 200 from its number. 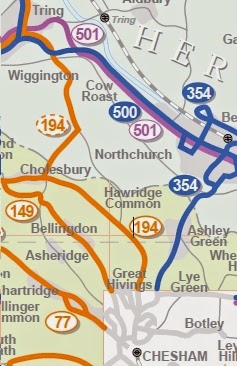 It now runs on Wednesdays only! 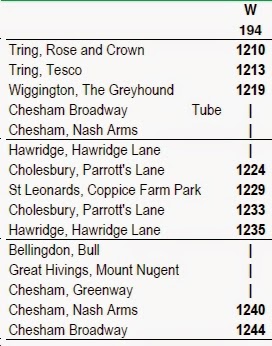 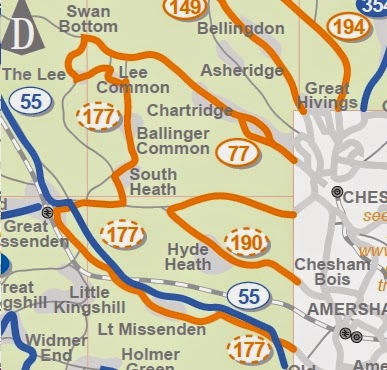 ... with an equally sparse offering! 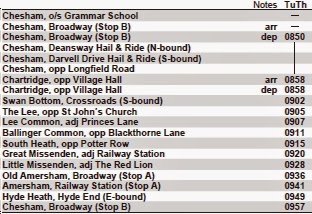 Tuesdays and Thursdays only with an afternoon trip "the other way round". Saturday offers a short working to Great Missenden and, confusingly, a service for Monday Wednesday and Friday is provided by bus 190, not shown on the above map.

fbb does not know what happened between the withdrawal of the 394 via Ballinger (as in the 1975 timetable above) and the modern 177/190. Comments are invited! 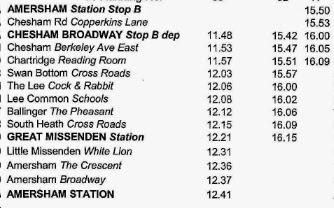 ... and four trips in the opposite direction. It was on one of these tours that Northampton correspondent Alan spotted the stunning bus stop signs.

And it wasn't one of these, standard Buckinghamshire offerings. Nor was it even this non-standard erection outside Ballinger Common War Memorial Hall ... 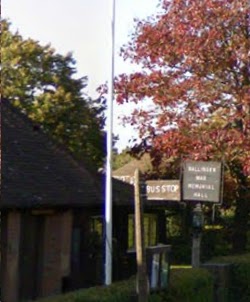 ... clearly designed to fit in with the rural delights of the community meeting place! No, this is what they spotted on the road between Chartridge and Lee Bottom, just past the Ashotts lane junction. 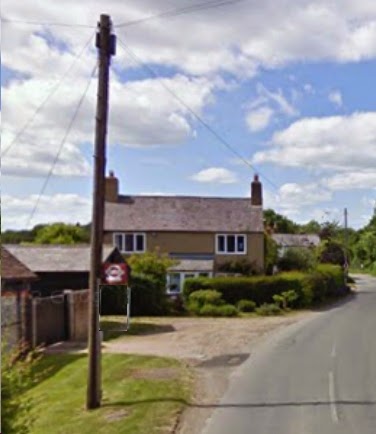 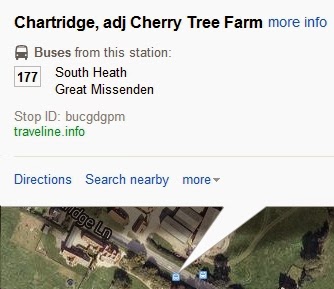 ... and, amazingly, it is a standard London Transport flag; presumably missed by the Buckinghamshire bus stop beautification brigade. Here is the enthusiast bus at the stop with the passengers photographing and drooling over the anachronism. Sadly someone has stuck a Traveline label on it to spoil the image. 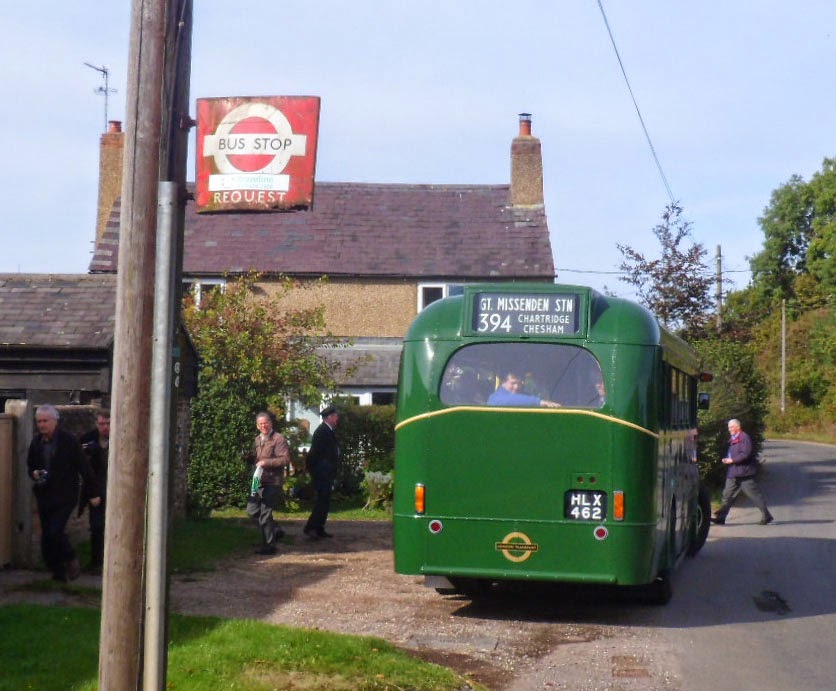 This bus, London Transport (Country Area) T792, HLX 462, dates from 1948 and has an AEC Regal III chassis with Mann Egerton bodywork, built in Norwich. T792 was one of the very last half-cab single-deckers bought by London Transport and is now the sole survivor of this (to my eyes) exceptionally handsome batch of essentially 'provincial' buses supplied to LT. They had relatively short lives compared with the long-lived contemporary RT-type double-deckers, many of which went on to achieve lives of over 25 years, which until the late 1970s, was a rare thing. Infromation from (here) where many more photos can be seen.

Perhaps the above now goes some way to explaining why fbb was moved to pen a parodical poem in yesterdays blog (read again if you haven't done so already!). The whole tale contains much more wondrous transport history than fbb can include in a short article and does, perhaps, explain why sad old men pay good money to travel the highways and byways of Britain on old buses. Bus stop signs can be equally exciting.

You can wake up now!

Thanks to Alan for the basis of these two blogs; and to considerate comment contributor Kentish Clive for sending the old 394 timetable pages. 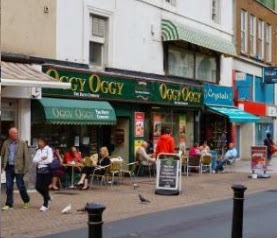 ... but as the first bus attempted to travel on the bridge this morning, it got stuck on the approach ramp. A South West Water spokesman said: "We installed temporary traffic lights last night between 9pm and 6am to allow a temporary bridge to put in place with the idea being that the buses could keep using the road.

However, the first bus caught its underside on the bridge structure. It appears that the gradient of the tarmac ramp that has been installed up to the bridge was too steep."
Fortunately a bystander was on hand to film the "Gold" vehicle in situ. Bus services have been heavily disrupted as Fleet Street is a main bus road in the town. 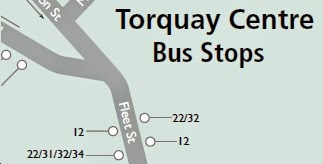