Aspiration Combination at the Station 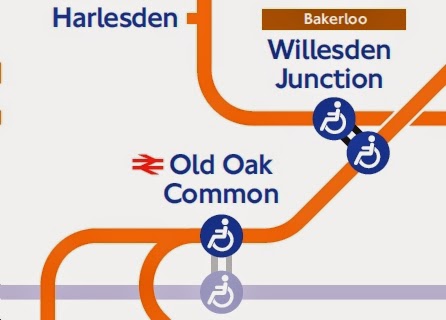 The suggested Old Oak Common station on the Overground network doesn't make sense. It is sited before the lines to Clapham Junction and Richmond split. 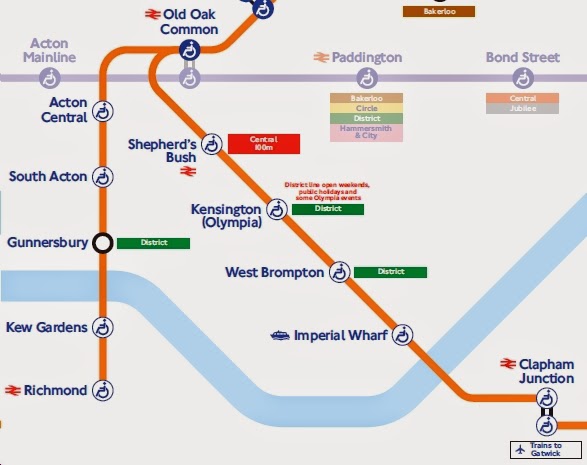 
And where they split is nowhere near the site of Old Oak Common Crossrail Station. Look at the Google Earth view included by fbb in yesterday's blog. 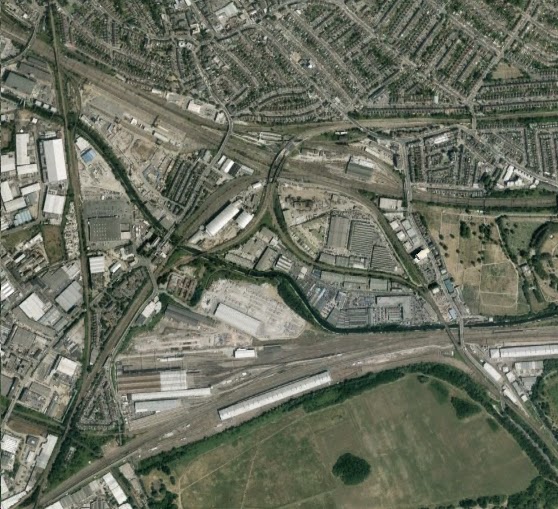 The divergence of the Overground lines is obviously just above the centre of the graphic above. If Old Oak Common (Overground) is to be sited north of that junction, it is barely a ballast chip's throw from Willesden Junction High Level and an interchangeless distance from the Great Western main line. Crossrail, by now part of the suburban service out of Paddington arcs across the bottom of the map, above Wormwood Scrubs.

Clearly summats up. And that's before we add High Speed 2 (blue line, below) to the mixing bowl. 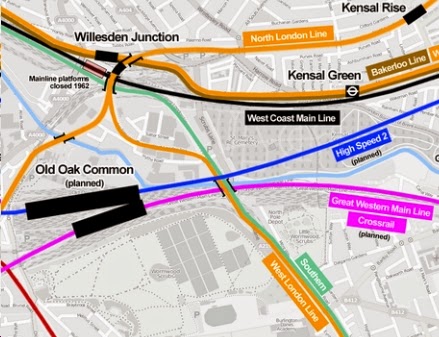 So let's start with the easy bit. If Old Oak Common station is built it will link Crossrail with High Speed 2 and we can see the result in the aspirational graphic below. 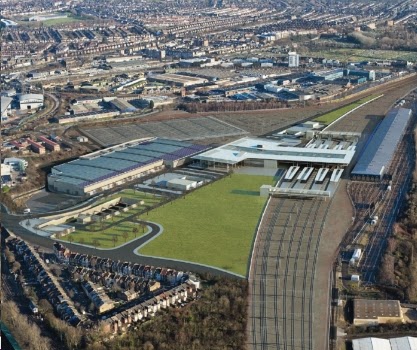 Reading from left to right we have the Crossrail depot on the site of the "old" Old Oak Common infrastructure; then comes the HS2 station in tunnel and/or cutting. Next we have the open platforms on the Great Western main line with the long shed (right) being the former Eurostar depot. This graphic quietly ignores the Overground lines.

And that is simply because no-one has actually decided how they might fit in. All sorts of weird and wonderful schemes have been proposed. Here are a few:-

1 . Divert the Clapham Junction line via the Richmond line then back past the new stations. 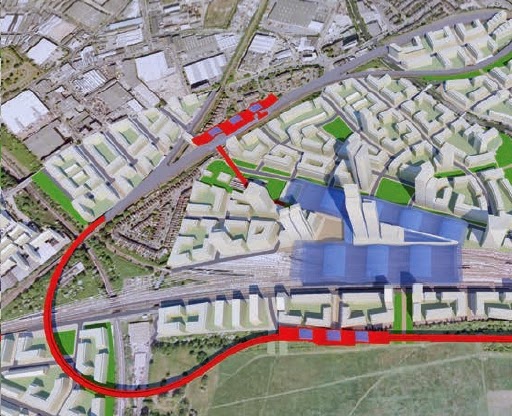 This would require two new stations, one for Richmond trains with a hefty walk; the other more conveniently situated for Clapham junction clients. Would Clapham Junction trains stop at both stations; it would be confusing if they did?

2 . Or perhaps the same scheme but with only one station ... 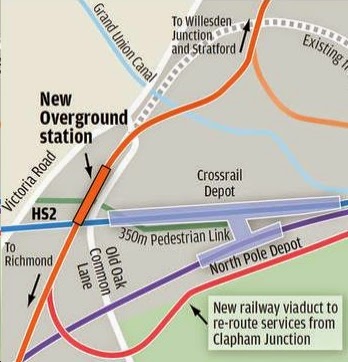 3 . Or, divert the Richmond trains via the new interchange and route Clapham Junction services similar to the above. 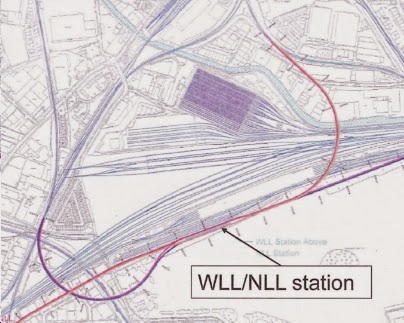 That would involve a second major viaduct to the east of the new interchange. Pricey!

4 . Or; build a second station on the Clapham Junction Line with an even longer walkway ... 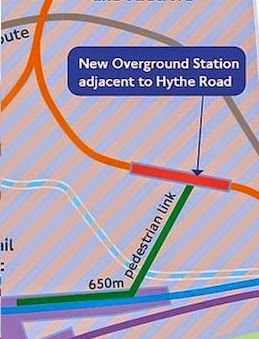 Then we need to consider the Dudding Hill Line. This line currently provides a freight link from Acton Wells Junction to the Midland main line at Cricklewood; ... 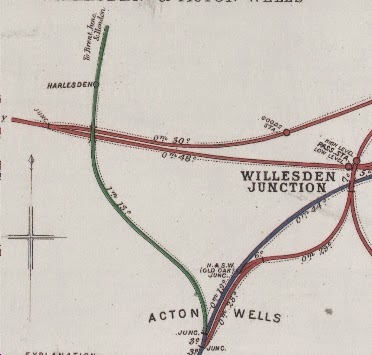 At present the line has not been electrified and has a 30 mph speed limit with semaphore signalling. It is lightly used for freight with a dozen trains a day in each direction. The main traffic is aggregates (including to a cement depot at Neasden) and compacted household waste from depots at Brent Cross and Dagenham to the land-fill site at Calvert in Buckinghamshire. The line is still authorised for passenger services and very occasionally, it is used for chartered passenger trains, including Pullman heritage coaches.

5 . There are (far fetched?) proposals to re-instate a passenger service over this line; which gives yet another option perhaps with the added bonus of a link to the Euston lines. 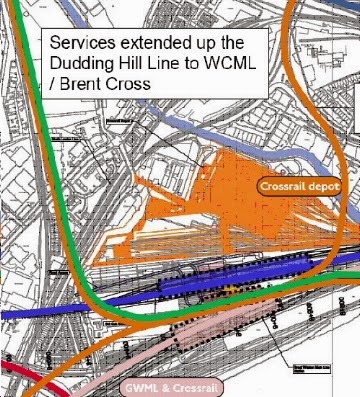 We are surely in the realms of pure speculation, particularly as Governments of varied colours grapple with the ungrapple-able economic situation. But, having produced his 2026 map, we can be sure that Boris would like a link from his highly successful Overground to HS2 and Crossrail  somewhere in the Old Oak Common area.

Now if Crossrail gets a link to the outer suburban services from Euston north-west to Milton Keynes and Northampton etc. ... 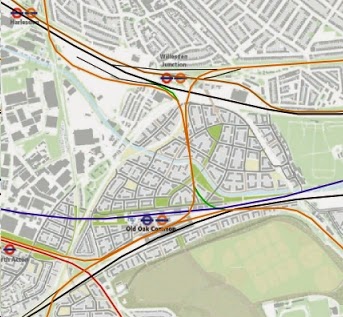 The whole lot is "out to consultation", whatever that may mean in practice.

And a PS looking back at Part 3 (read again). In his plans for the future of all rail services in the Capital, Boris has announced that the Gospel Oak to Barking (and Riverside??) line will increase from every 15 to every 10 minutes.

The next phase vehicle-wise is the Raspberry route 6, 6A and 6B. 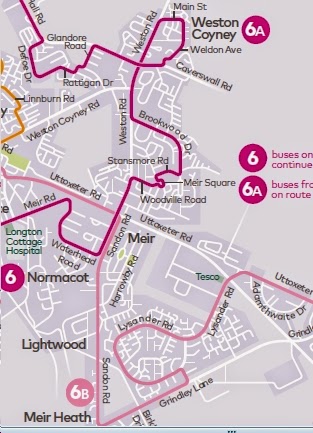 So today First will be displaying their new Streetlites at Hanley Bus Station. fbb was invited to the launch but had to decline due to a visit from No 3 Son. But here's a Raspberry front end ...

... and here's a Potteries resident complaining about a poor bus service in Weston Coyney.
Was the name a wise choice, First?