It started with Stoke Bruerne, more correctly a picture thereat ...

But it got a lot more complicated. 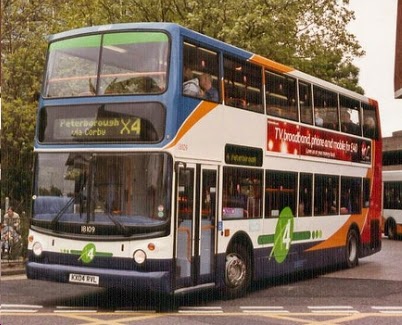 Stagecoach X4 runs hourly between Peterborough, Northampton and Milton Keynes, enhanced to every 30 minutes between Corby and Northampton. It became part of the "Gold" brand in 2011. 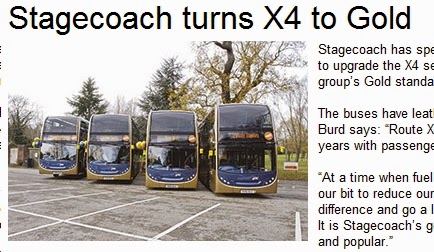 The through route takes 3 hours and 20 minutes although the Stagecoach web site doesn't believe that buses run all the way without some kind of break in service.

Mentally glueing the bits together reveals that there is no X4 between Northampton and Kettering! It is astounding that Stagecoach should advertise one of its high quality prestige routes in such a potty and incompetent way. It gets worse of you search each heading for a timetable.

Fortunately each of the above four web-page headers leads to the same PDF file.

The service does have some passing claim to its X for Express title because it uses "fast" roads from Peterborough to Oundle and from Earls Barton to Northampton.

But not in the evenings and on Sundays. Now the X4 ceases to be anything like X rated  and eschews all its daytime Monday to Saturday fast road bits.  The running time increases slightly to 3 hours and 25 minutes.

The non X route begins by serving Lynch Wood, Alwalton and Elton on its way to Warmington services. 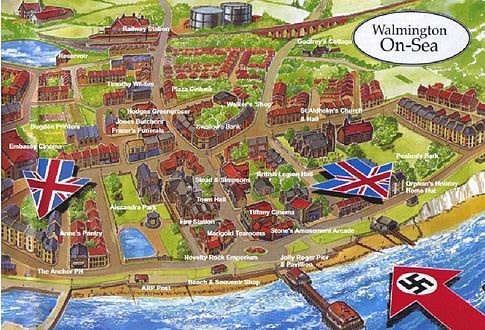 [note for telly addicts: Dads Army was based in the fictitious Walmington (same pronunciation) on Sea; but no connection!]. 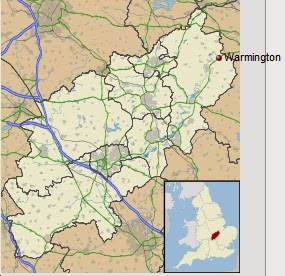 The village is bang on the border of fbb's birth county. Northamptonshire used to have an extra bit eastwards, namely the Soke of Peterborough

The term soke (in Old English: soc, connected ultimately with secan, to seek), at the time of the Norman conquest of England generally denoted "jurisdiction", but due to vague usage probably lacks a single precise definition. In some cases soke denoted the right to hold a court, and in others only the right to receive the fines and forfeitures of the men over whom it was granted when they had been condemned in a court of competent jurisdiction. Its primary meaning seems to have involved seeking; thus soka faldae was the duty of seeking the lord's court, just as secta ad molendinum was the duty of seeking the lord's mill. The Leges also speaks of pleas in socna, id est, in quaestione sua (pleas which are in his investigation).

Although Peterburians would lay claim to being a separate legal county! Anyway, it was merged with Huntingdonhire in 1965 and handed over to Cambridgeshire under the 1974 re-organisation.

Befire we look in detail at the X4 in the Peterborough area it is worth reminding ourselves of the origin of the current Stagecoach "Gold" service.

United Counties developed a network of longer distance limited stop services under the Coachlinks brand. The X65 ran to Peterborough. 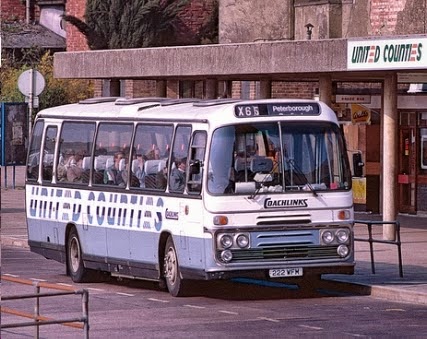 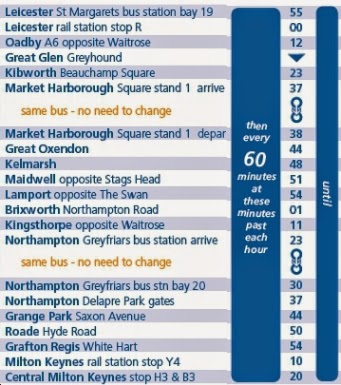 ... although perhaps someone should tell the Stagecoach web spinners about the demise of Greyfriars bus station!

But we are rushing on ahead of ourselves. We first need to look a little closer at the Peterborough end.


Next bus blog : Friday 31st October
Posted by fatbusbloke at 02:00