The Story so Far 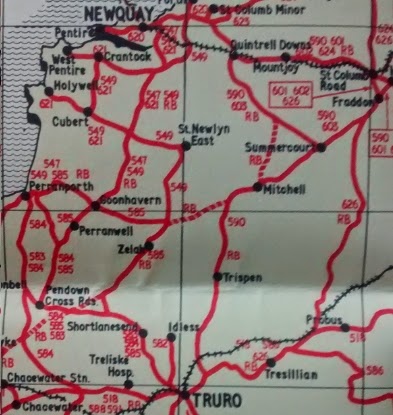 Back in the glorious days of 1971 when all was well with the world, Lord Fiske ... 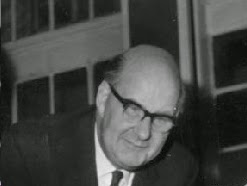 ... had just successfully introduced us to decimal currency consigning the tanner, the florin, the half crown and the thrippny bit to oblivion. Bus privatisation was still 15 years away and a nationalised Western National ruled most of Cornwall.

Despite a steady decline in passengers and an equally steady rise in fares, green buses trundled far an wide throughout the Principality. Service 590 ran between Truro and Newquay approximately once every two hours. Some journeys took just over the hour and ran "direct" between Summercourt and Quintrell Downs. At the cost of an extra fifteen minutes, other trips went via Fraddon and St Columb Road.

Between then and now a lot has happened. We have seen the post privatisation decline of First Bus and the consequent rise of Western Greyhound, a company formed by ex Western National managers. Despite this development, First have clung on to the "direct" route between Truro and Newquay. For some time it has been the 88 ... 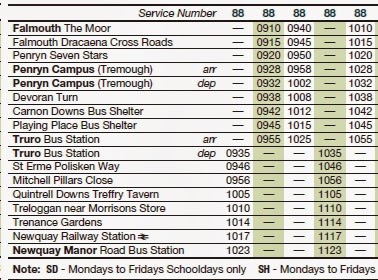 ... running every hour "direct" between Mitchell and Quintrell Downs, eschewing Summercourt. On the 1971 map above the cut-off road is dotted and labelled RB as it carried a "Royal Blue" express coach service.

But if we look at Western Greyhounds route map, we see a number of additional but less direct services between the county town and Newquay, home of surfing and drunken stag weekends. 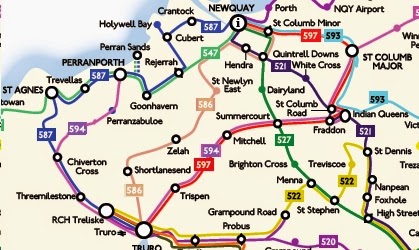 Note the following (from left to right):-
587  via Treliske Hospital, St Agnes and Perranporth
586  via St Newlyn East
597  via St Columb Major (as some 1971 service 590 trips)
Note also
594  between Truro and Perranporth (originating in Wadebridge)

All four Western Greyhound [WG] routes run hourly and it is to the company's credit that services have been developed and ridership has grown. To be fair, some of these routes (e.g. Truro Perranporth and Perranports Newquay) were created by joining up bits and pieces together to make viable through services. Neverthless a splendid effort by WG. 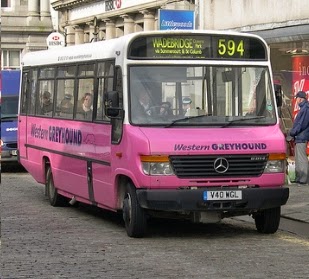 ... the livery changed to a slightly wishy-washy green ... 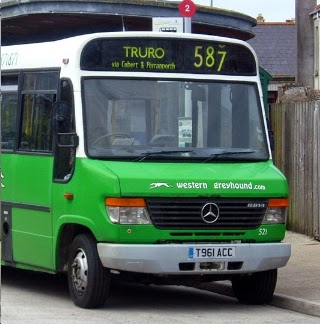 ... and again to a deeper, richer green.

We have even had a new trendy logo and, being trendy, it is more difficult to read and understand.

That yellowy squiggle above the word "greyhound" is, well, a stylised greyhound!

Or is it a dead tulip?

But things have unravelled for WG over the past year or so:-

Withdrawal from the Penzance area.
The boss of the bus company which is axing services in west Cornwall says he was forced into the decision by lack of support from Cornwall Council. Mark Howarth had told ITV West Country the council wasn't prepared to help fund the routes.

Council tender cancelled.
Western Greyhound only began running the 574 and 575 bus service in May after the previous operator, DAC Coaches, went bust in March. The council said in a statement: “The authority has held a number of meetings with Western Greyhound to try and improve the situation but took the decision to end the contract when Western Greyhound admitted it was having problems in fulfilling the service."

Phone-in outburst.
“We are going through some very serious difficulties at the moment,” Mark Howarth said. “But most of our buses do run. People say they are unreliable, when in fact they are full. But I can’t wave a magic wand and put it right tomorrow. I’ve got a very hardworking team. Unfortunately there are one or two individuals – a small number of our members of staff, who are working against us and trying to sabotage us."

The omnibological rumour-mill is grinding at full speed in Cornwall. fbb does not (usually) deal in rumours but clearly WG has gone from award-winning star performer to struggling-to-cope independent. Is the company for sale? More rumours on that score!

An obvious contender for purchaser might be the rejuvenated First Bus; but after significant improvements in their business, are they likely to take the risk? Would the competition authorities allow it? Probably no to both!

It is with the sad troubles of WG in mind that First have registered two new competitive services starting at the beginning of November. In the dog-eat-dog world of commercial survival of the fittest (one of the huge benefits of privatisation?), is First kicking a man when he's down or is the Aberdeen company signalling its determination to protect its flank from any firm considering a WG take-over?

We will look at the timetable detail tomorrow and await developments on the "poltical" front in due course.

Correspondent David (also from Kent) has sent a page from a 1980 London Country timetable book which shows the route as service 359 with 4 (5 Monday to Friday clockwise) trips in each direction. 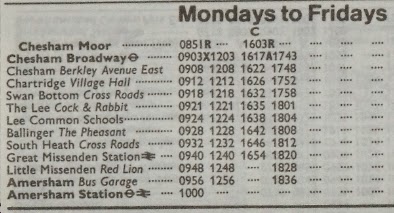 If none of this makes any sense to you, best consult "Bemused by Ballinger Bottom (Bucks) [2]" (read again)