An Infestation of Spiders [Part 3] 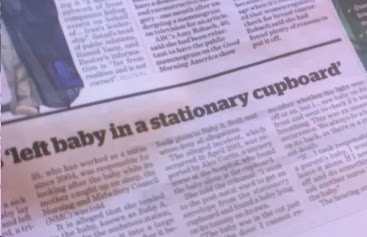 ... a sorry tale of an NHS blunder; enhanced by an equally sorry literacy blunder. Ironically stationary (not moving) and stationery (paper, envelopes) have their origins in the same latin word!

stationery
1727, from stationery wares (c.1680) "articles sold by a stationer," from stationer "seller of books and paper" (q.v.). Roving peddlers were more common in the Middle Ages; sellers with a fixed location were often bookshops licensed by universities.

P.S. The word is correctly spelled later in the article. Or should that be "spelt"?


Transport for London's "spider" map for South End Green and the Royal Free Hospital has struggled with adding the Overgound Line (via Hampstead Heath station) ... 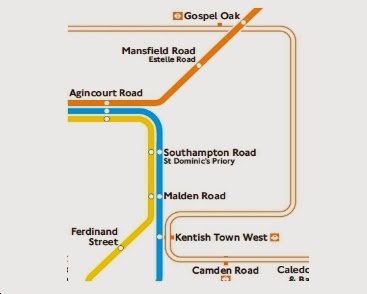 ... and the Underground Northern Line, crazily convoluted at Charing Cross. 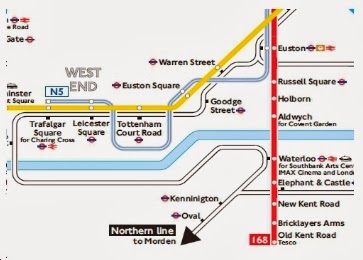 TfL's contractors have really excelled themselves in awfulness with this. We have already seen that the Northern line forms a good "anchor" for our diagram. Like buses 24 and 168, the black Underground turns south at Euston. On TfL tube maps this is usually a near-straight line running from North to South. 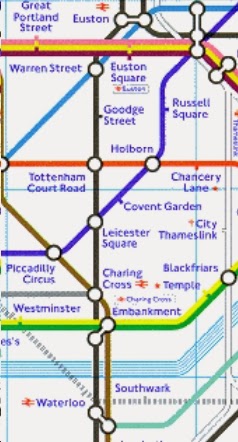 In fact the Northern Line (Charing Cross branch) turns sharp right then back left between Euston and Warren Street ... 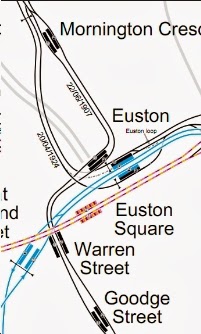 ... and sharp-ish left at Charing Cross before veering right again at Waterloo. 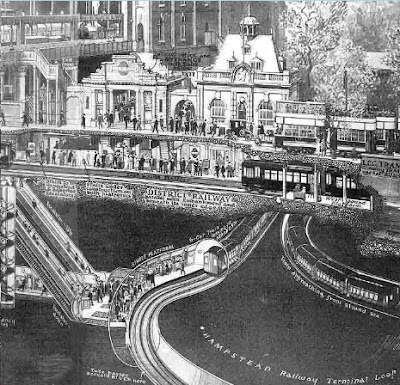 The engraving above shows Embakment (Hampstead Railway, later Northern Line) when it terminated in a loop before being extended via Waterloo.

There were no overrun tunnels at the south end of the original Charing Cross terminus, so the agreed loop ran from platform end to platform end, curving out under Victoria Embankment Gardens. There was a single loop platform, which opened in 1914 as Embankment and is now the northbound Northern Line platform there. A long connecting tunnel linked this with the Bakerloo Line platforms, tthen named Trafalgar Square.

Because our preparation has been so carefully done, our "spider" simply replicates the two bends and, not at all surprisingly, it all fits together beautifully. 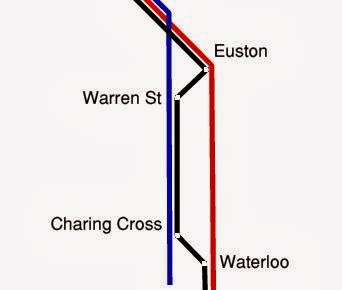 fbb notes that the "spider" becomes easier to follow if it is closer to geographical truth; the various bits and pieces will always make more sense and fit together more comfortably. But will the Overground at Hampstead Heath be better than the TfL/T Kartor mangling? Back to Di's advice.

The Overground interacts with our chosen bus routes at West Hampstead, Finchley Road & Frognal, Hampstead Heath (for South End Green, of course), Gospel Oak, Kentish Town West and Camden Road. That's a whole lot of connections to get right. Once again, the nearer we can be to geography, the better the finished product will look.

We should be able to put it all together, but we need to exaggerate the bulge of the line just a smidgeon to ensure that the diagram doesn't get too cramped. So we will add our slightly exaggerated bulge. 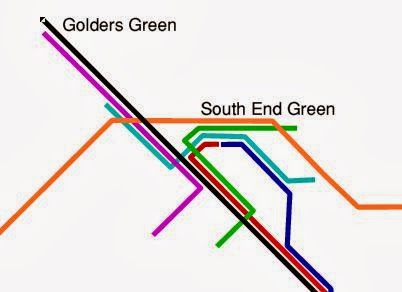 fbb can see the pattern emerging, but there is a great deal more to do. Afternoon tea is over and your chubby blogger needs to return westwards. "I would love to see a finished Diane Aggram spider," he said excitedly, "would you finish it for me?"

"Absolutely not!" Di replied with a wicked smile, "You take my rough workings home and you finish it. You'll never learn unless you try. Have an Eccles cake before you go!"

We will see what sort of mess the happy amateur makes of a London "spider" map.

Meanwhile, consider this ... There are other ways to design train diagrams; like this unofficial version of London's rail network, based on circles and using the Overgound line via Hampstead Heath as a perfect circle "anchor" - well it's different! 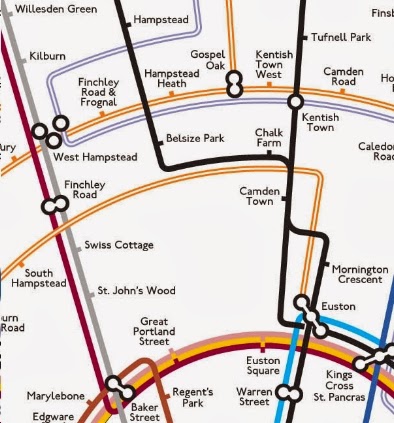 The blue-and-white line is the "Thameslink" suburban service via St Pancras.

Commuters and tourists may sometimes feel like they are getting nowhere on the London Underground, but a new re-imagining of the iconic Tube map has suggested going round in circles is no bad thing. Dr Max Roberts has issued a redesign of the map based on concentric circles, partly inspired by the orbital London Overground. The London Underground map expert said the official map was becoming too cluttered. In a posting on the Going Underground blog, he wrote: "Grounding a map in familiar shapes such as circles can make it easy to comprehend".

The two Finchley Roads are almost next door to one another in the real world!

Will fbb do any better? A blog (blogs?) will appear NEXT WEEK.


Next rail blog : Thursday 14th November
Posted by fatbusbloke at 02:00