So, after 737 years (depending on where you start counting) there is now no longer a market on or near the site of Sheffield Castle. Yesterday was the last day of trading. Buses will still leave from Castlegate but the markets building is shuttered and barred and will soon be no more. 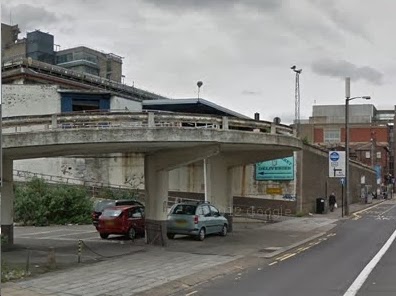 The first momentous moves to modernity came with he opening of the Norfolk Market Hall on Haymarket in 1850. 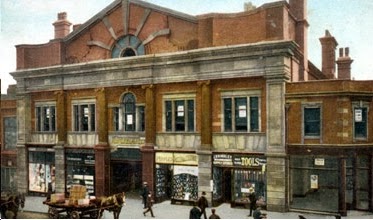 This served the citizens of Sheffield for over 100 years but, during its first few decades, there were still dozens of open fresh food stalls littered around the surrounding streets.

So it was that in 1928 Sheffield Corporation started work on a new Castle Hill (indoor) Market, built in conjunction with the new Brightside and Carbrook [B&C] co-op's city store. 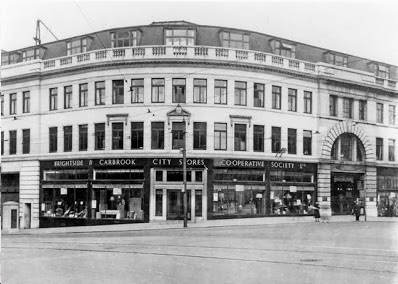 The markets were accessed via a suitably municipal-grandiose archway ... 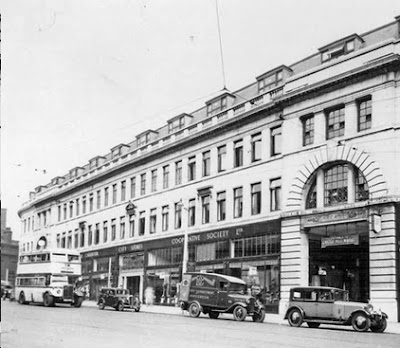 ... on Exchange Street. [Note the bus; it will (indirectly) feature in a P.S. to this blog.] The interior of the market hall was as grand as its entrance portico implied; well, a lot grander than grovelling around outside in the rain. 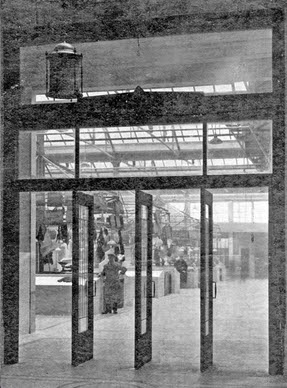 Doors led through to a light, clean and spacious meat and fish market, wonderful to behold! 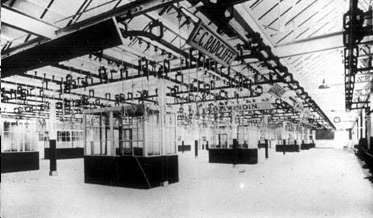 But it was not to last. Having opened in 1930, the area received a direct hit from enemy bombs in the Sheffield Blitz of 1940. The B&C store was gutted (and, later, demolished) ... 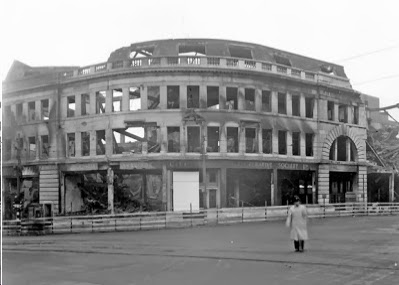 ... and temporary access was provided to allow the market to continue trading.

Roll forward to 1959 and the brand new Castle Market buildings were opened. 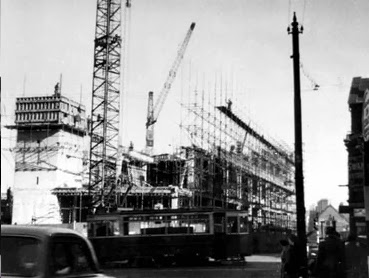 In his pre-marital days (late 1960s) fbb and his flat mate often bought their weekend goodies there. The meat stalls were always busy ... 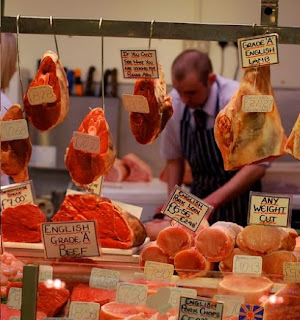 ... selling quality stuff. There was fruit and veg a-plenty ... 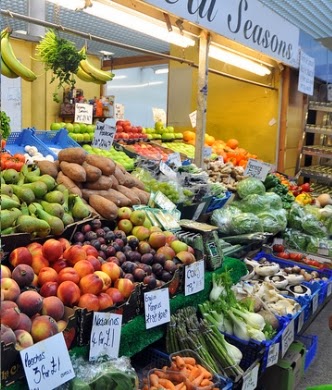 ... fish of every imaginable shape, size and colour, plus at least three stalls specialising in ... 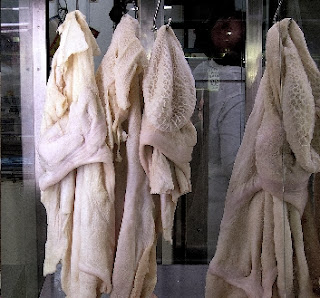 ... tripe. And, yes, the stall-holder would take out a huge pair of scissors and cut you off a sheet. Health and hygiene, phooey! [For the record, fbb often admired those stalls but never partook, warned off by his future father-in-law's description, "no sooner have you got a bit swallowed, than it springs back into your mouth and you have to start again."] 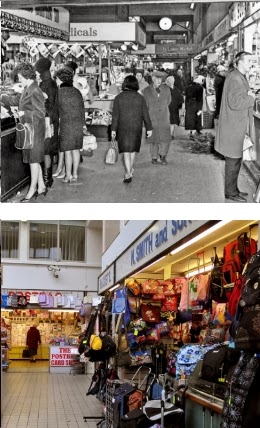 But as the 20th century turned into the 21st it was increasingly apparent that traditional city centre markets were losing out to the dreaded supermarkets. Certainly, when fbb visited he Castle Market a few years ago, it was but a shadow if its former self. The fresh food stalls were fewer in number, there were more empty pitches and many many more stalls were selling tat. 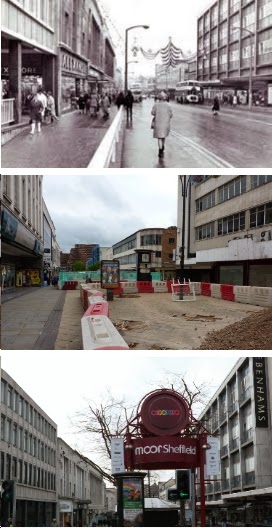 Tomorrow a much smaller market hall opens at the foot of Sheffield's once-popular shopping street The Moor, itself having suffered a steady decline in popularity exacerbated by the opening of the Meadowhell out-of-town "mall". 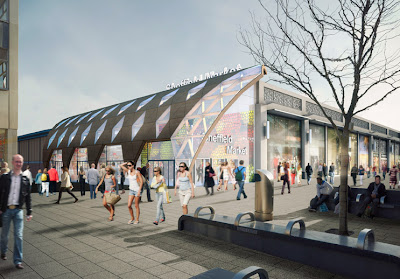 It is part of yet another scheme to rejuvenate the Moorfoot area. Travel South Yorkshire have produced a leaflet ... 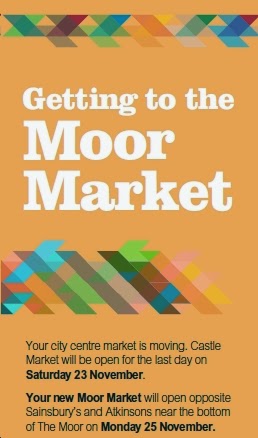 ... complete with map and index showing which services stop where. 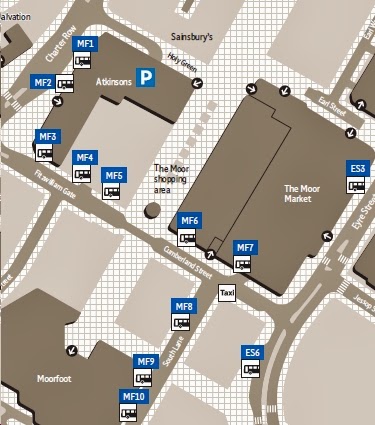 Unfortunately the map plus index combination doesn't differentiate between different directions of routes so isn't as useful as it could be. It does, however, have one piece of useful advice:-

Only time will tell if the new Moorfoot Market will succeed. Or if the new market will bring extra business for Sheffield's bus network. fbb will keep you (blog) posted. 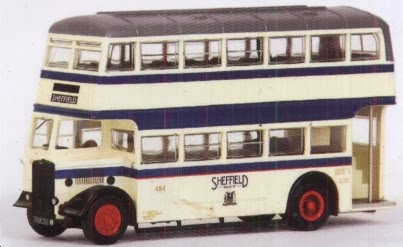 It's a model of a Guy Arab HWA 714 which ended its days with Harper Brothers of Heath Hayes. 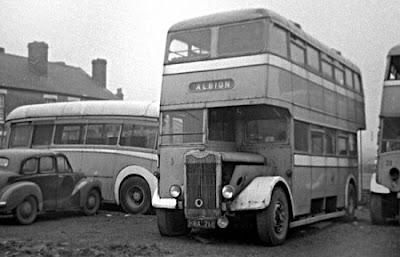 But look closely at the front:- 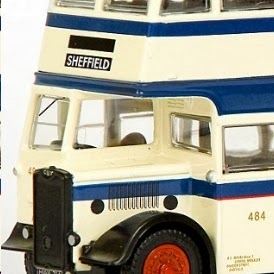 It's missing its route number box (above the two destination apertures) and, what about that stripe on the engine cowling? 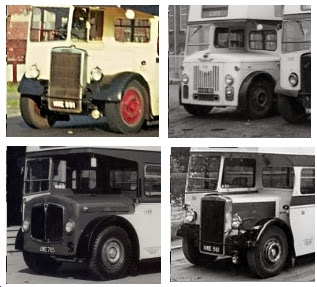 fbb only remembers all cream bonnets, although blue bits did exist from time to time. But was there ever a continuation of the bodyside stripe? fbb thinks not - unless anyone out there knows better! EFE does qualify their advertisement with the phrase "details may change"; so let's hope they get it right before fbb (and many others) shell out much fine gold to buy one.
--------------------------------------------
Next international blog : Monday 25th November
Posted by fatbusbloke at 02:00