The Route of the Flying Scotsman : the final fling? 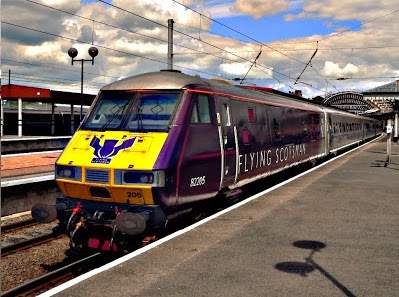 The named train faded away from GNER's portfolio but it returned with a flourish in May 2011 under East Coast, the current (and nationalised) operator of the route.
Of course it is, by no means the real Flying Scotsman as it leaves Edinburgh at 0540; but it does the journey in 4 hours which is a bit better that the 1924 time of 8!

But back to the book [GNER, Route of he Flying Scotsman] and a few snippets to whet the appetite of a potential reader.

Details of the unique class 89 locomotive ... 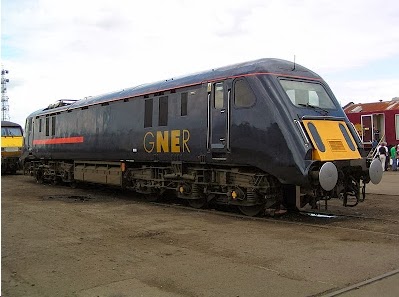 That's not a quote from the book, by the way, it's from Wikipedia! The other oddity was the ex-Eurostar "White Rose" sets. 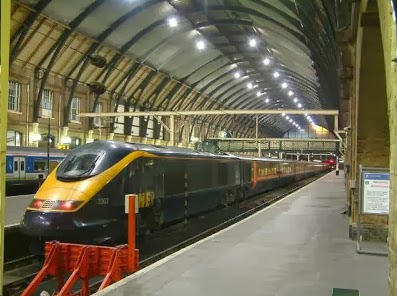 From May 2000 until December 2005, GNER leased five Class 373 Regional Eurostars. These were used on services to York and later Leeds but were restricted to 110 mph between Grantham and Doncaster because of problems with the overhead wire and pantograph interface.

The saddest chapter covers the three major accidents that blighted the GNER name. There was a broken wheel at Sandy in June 1998. 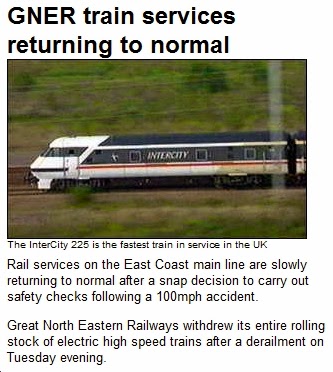 This came very soon after a much more horrific crash at Eschede in Germany where 100 people lost their lives. This was also due to a broken wheel.

The Hatfield derailment came in October 2000 and led to a panic-meltdown of the whole rail system.Whilst any loss of life is awful it is to the huge credit of the design of the trains that so many escaped from such a high speed accident. 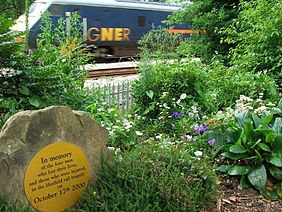 Four months later came Great Heck with 10 fatalities. A GNER train had become derailed when it struck a Land Rover on the track; there because its driver had fallen asleep at the wheel. Unfortunately the derailed carriages were then struck by a freight train travelling in the other direction. 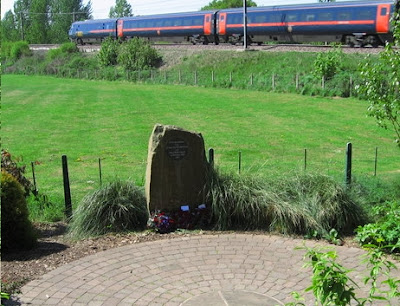 All three are described sensitively by author Balmforth, who then details the effect that these events had on management, staff and the railway in general. A tough read, but a powerful insight into the challenges of handling such distressing events.

The book closes with an account of how it all went belly-up. Parent company See Containers went bust and it became increasingly clear that GNER could not pay the premium fees to the government that its contract required. 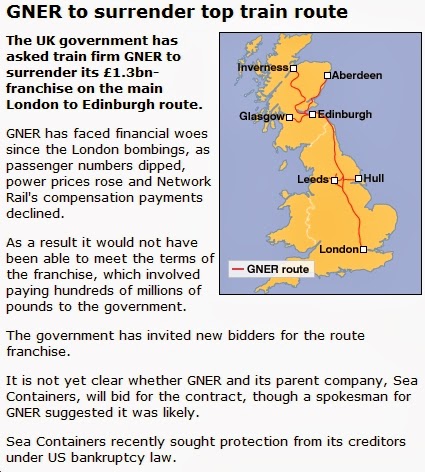 The book does not record the repeat story of National Express which also handed in the keys in similar circumstances, namely over-optimistic bidding for the franchise.

Rather than a collection of pretty train pictures (although there are plenty of those), this book talks about the business of running a railway company. This is revealing and fascinating and would make a jolly good read at £20; it's even better as a free offer with a Modern Railways magazine subscription! 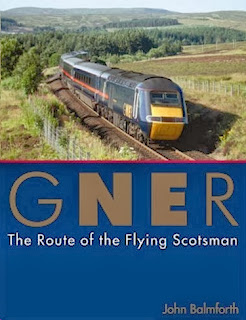 Next bus blog - Monday 12th November
Posted by fatbusbloke at 02:00