The Trouble with Torpoint [4]


Background blogs for this barmy bus business are (here) and (here).


Many moons ago, in the loony post privatisation period, Plymouth Corporation buses ran to Tavisock. This did not last; but then GoAhead, owners of the former municipality bus service, started a competitive service, branded "Blue Flash", earlier this year. This was followed a few weeks later by the next incursion into former Western National (now First Bus) territory with route 32 to Torpoint. fbb caught the 1124 departure from opposite the station.

The route continues via the station and Molesworth Road before turning dog-leg left at Stoke to trundle down the hill to the terminal. 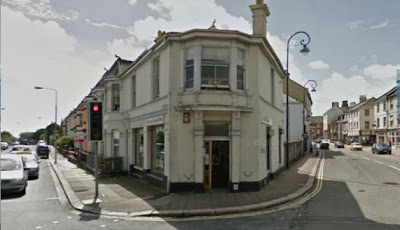 Molesworth Road (Stoke) on the left.

Two buses an hour cross the ferry to Torpoint, two terminate at the Ferry.

First's response to GoAhead was to revamp their service 81. Previously it had been a bit of a mess with some journeys via the station and some direct via Devonport. But the revised service 81 has all journeys following the "faster" route via the ferry and Torpoint centre ...

... a feature which is emphasised on the company's literature. 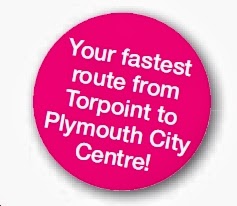 The revised service was advertised as "simplified".

Maybe so, maybe no; let's look at the "simplified" service from First. It's all about serving Torpoint's more modern housing estate north of HMS Raleigh ... 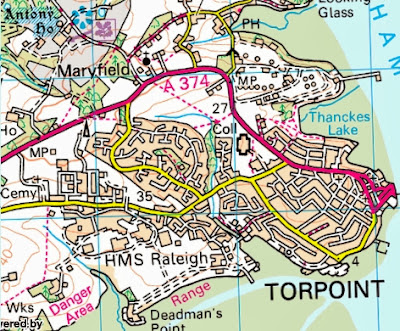 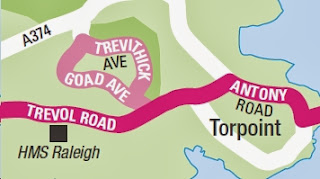 ... and the villages of the Rame Peninsula. 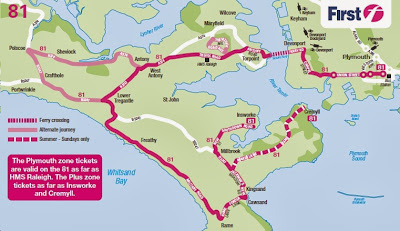 The "simple" Monday to Friday timetable looks like this:- 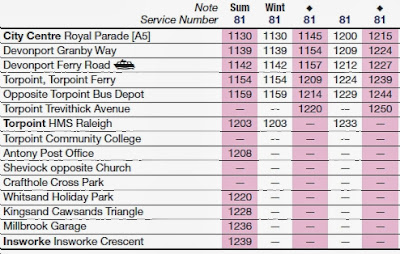 On Saturdays the pattern is different. 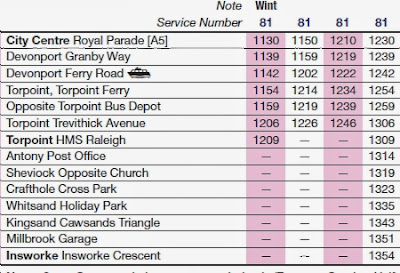 Buses all run via Trevithick Avenue every 20 minutes with an hourly extension to HMS Raleigh and an occasional extension to the extension on to Rame. Simple!

On Sundays it is very simple - every hour to Trevithick Avenue and HMS Raleigh ...

But in Summer the hourly service remains (but now it calls at Great Park; is that the same as Trevithick Avenue?) and the extensions are so very simple. 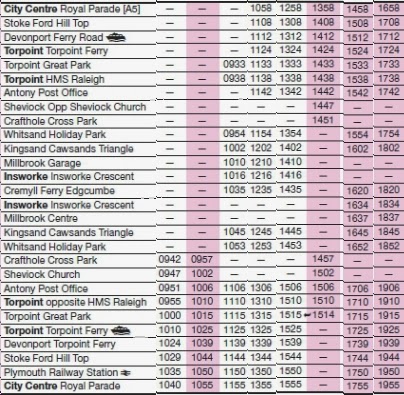 And, just for fun, there's an extra variant doing a "double run" to Cremyll. [fbb has removed journeys that run to HMS Raleigh only.]

So, how do the two operators compare? fbb was the only passenger from Stoke to HMS Raleigh (on GoAhead's 32)  where he alighted. 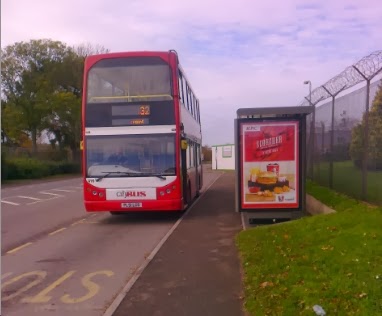 Buses turn via a loop which is part of an industrial estate just beyond HMS Raleigh Gates as caught here on Streetview. 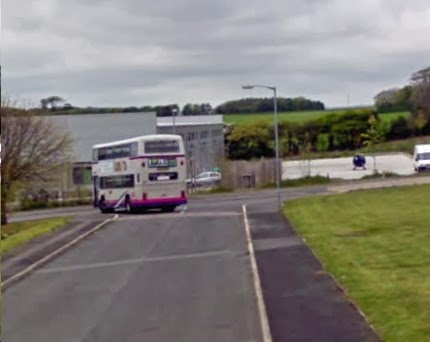 fbb waited a few moments for the First vehicle ... 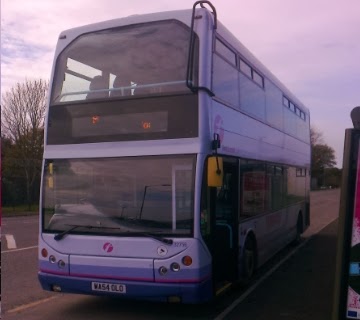 ... and rode all the way back to Plymouth. Total passengers between HMS Raleigh and City centre - six! Even a casual observer is left with the conclusion that neither operator can be making any money; there were barely enough passengers for two buses an hour from Torpoint, let alone six! 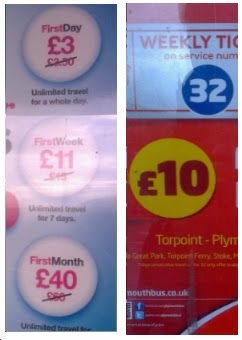 Both companies have attractive fares offers, slightly different, but again, there was no evidence that either red or off-white was capturing more than 50% of the potential customers when in direct bus-to-bus warfare. The fact that First have four trips each hour to GoAhead's two would suggest that they should be carrying more overall. A blog commentator seems to concur!

To add to the confusion, GoAhead are changing their 32 timetable in January (already!) They explain the change thus:-

Since our successful launch, we have identified that our Service 32 is challenged to maintain the timetable within Torpoint therefore whilst the number of journeys operating between Torpoint and Plymouth will remain the same we have decided serve Great Park Trevol Torpoint differently. 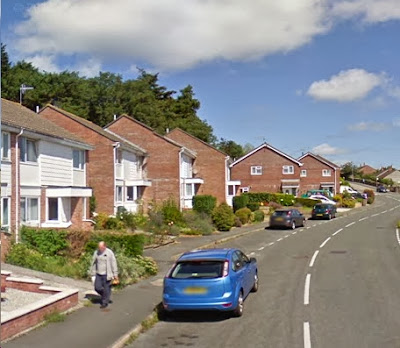 In case you are wondering why First Bus run trips to Cremyll on a Summer Sunday and at no other time (and fbb is certain you were wondering); do not fret. There are two return journeys thither from Torpoint ... 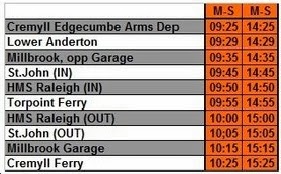 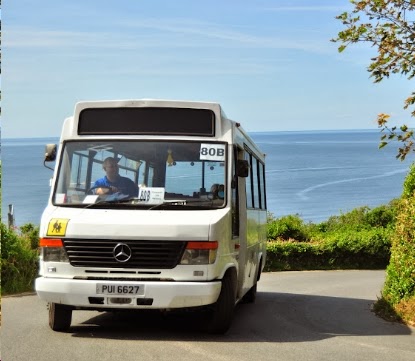 And there is a Ferry service (seven days a week - sample extract below) from ... 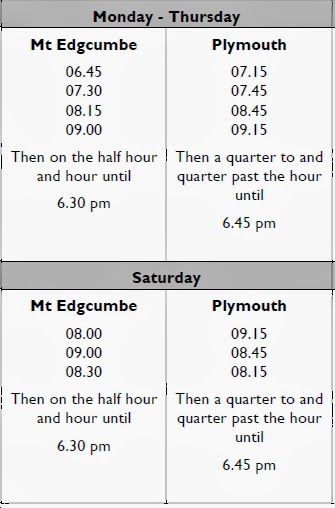 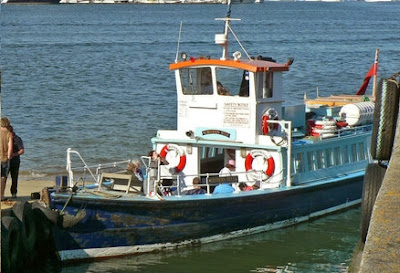 On Mondays to Saturdays, A-Line also runs a "Cremyll Circular" from the ferry to villages on the Rame Peninsula. 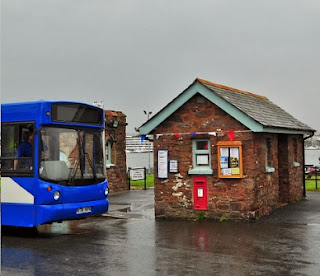 There is no Sunday A-Line bus service. So First Bus' Sunday 81s (tendered, presumably) fill in the omnibological lack. And to complete your Cremyll experience there is a bus from Plymouth Centre which stops at the Ferry on the City side. 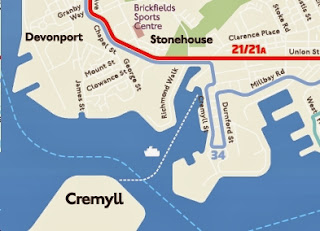 And on Sundays. Maybe?

What a tangled web we weave!


Next Bus Blog : Wednesday 20th November
Posted by fatbusbloke at 02:00