34 out of 50 and Other Celebrations

50 years ago the Tardis first "lifted" off from a scrapyard somewhere in London.

fbb was there! Well, not in the studio, sadly, (not even in a scrapyard!) but in front of a black and white telly and watching avidly. The second set of episodes introduced the Daleks, surely the most successful baddy in TV history. Your chubby saddo bloggo has hardly missed an episode in the intervening half-century; and will be on the edge of his seat at 1950 this evening! 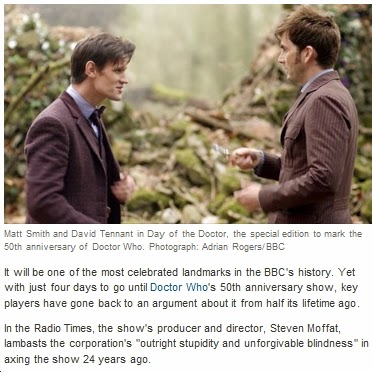 But there were a depressing 16 years of Dr Who-less-ness!

1963 saw another momentous development in fbb's life as he began the process of cutting the apron strings with a sojourn "oop noorth" at Sheffield University. This was the naive nipper's first experience of big city life, and, whilst his fellow students were enjoying discos, pub crawls and protest marches, a youthful fbb was riding around on Sheffield's buses. He knew how to have a good time!

Strange square buses with the engine at the back had arrived in 1959 as replacements for the Wadsley Bridge tram routes ... 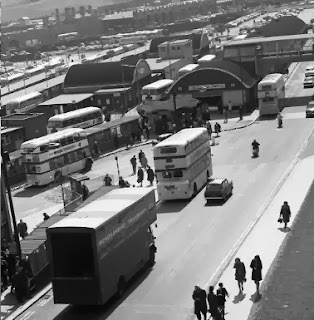 ... but, for the final tramway demise in 1960, long wheelbase conventional buses were delivered. 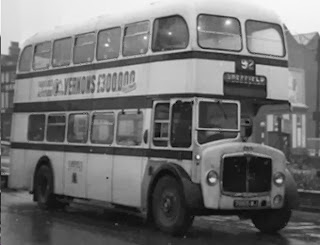 Mysterious beasts called Bridgemasters arrived for use on the busy Dinnington routes, their lower height needed for a low bridge; but mostly they were seen on the bridgeless City services to Gleadless. 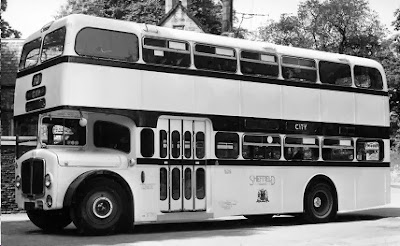 There was only one forward entrance (and ugly) representative of the marque, viz fleet number 525.

And, of course, all buses were two-man operated, even little used "socially necessary" routes into country territory as here on a Tuesday and Saturday only run to Load Brook ... 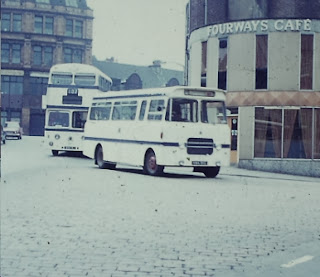 ... which is/was in the middle of nowhere. 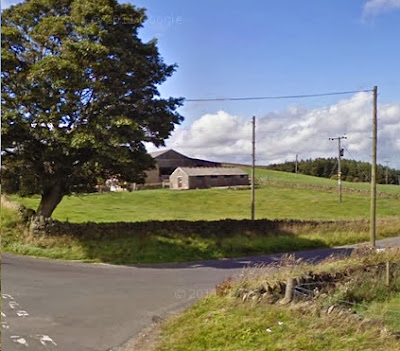 At the end of trading today, Castle Market closes; for ever. 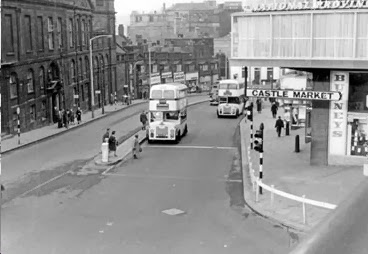 1296  A Royal Charter to hold markets and fairs in Sheffield was granted by Edward I to Thomas de Furnival. This Charter allowed a weekly market to be held every Tuesday and a three-day fair to be held once a year. 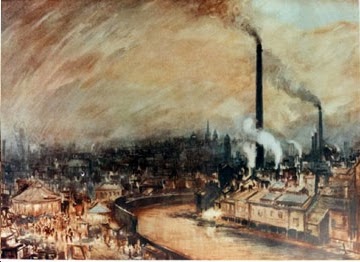 The fair was located on the banks of the river Don at Smithfield as seen in a later engraving. Food markets were later established on the site of Sheffield Castle ... 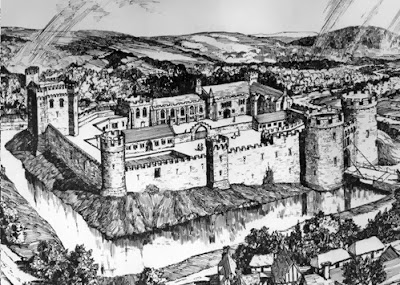 ... of which nothing remains above ground; but a few chunks are in a gloomy manhole in he current market building. 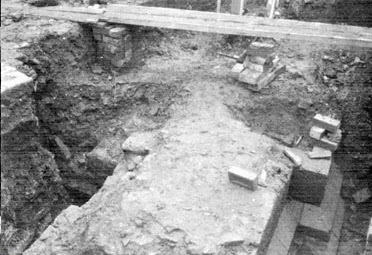 The first covered hall was for the butchers and it was located at the bottom of High Street at its junction with Angel Street. 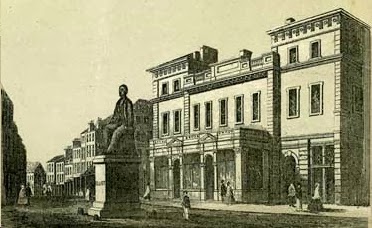 1830  A new developments including a market, bridge over the River Don and a Corn Exchange were completed. A petition was soon sent to the Duke of Norfolk (legal ownr of the right to hold markets) from the traders in Fitzalan Market Hall complaining about the loss of trade.

Long after the markets moved away from the High Street, the tram stops outside C & A ... 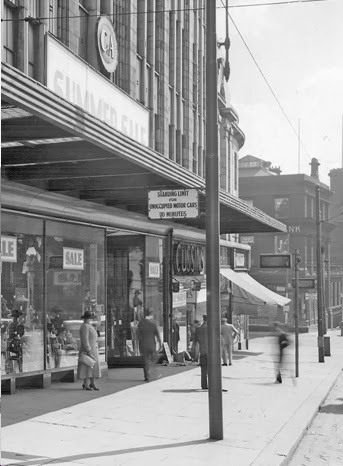 ... were referred to as "Market Side". Indeed, three years after the trams disappeared, fbb's landlady told him that his route back to the digs was by "car" (i.e. tramcar) from Market Side.

Meat wholesale had moved to "The Shambles" off Waingate ... 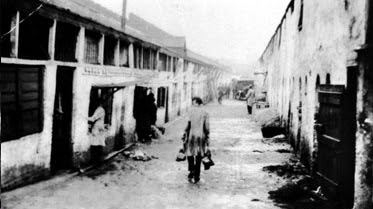 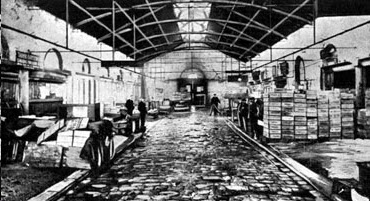 ... and fruit and veg adjacent to the Corn Exchange. All these facilities eventually moved to the spanking new Parkway wholesale market in 1961. 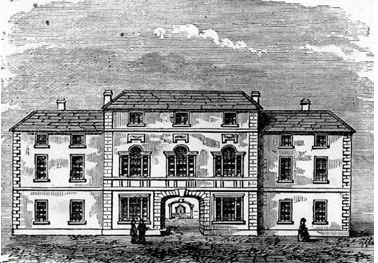 1850  The Tontine Inn was demolished. Its prosperity was largely dependent on the coaching trade, but it occupied part of the site chosen for the new Norfolk Market Hall. Almost from the opening of the Inn, coaches ran daily to different towns, the fares being 11/- to York, 5/- to Leeds, and 8/- to Birmingham, these being for box seats, with material reduction for other seats, which were practically 350% less. The Iris (local newspaper) gives us a very graphic account of a storm which struck Sheffield in January, 1802, when "scarce a house in the town escaped dilapidation. The slates were torn from the roofs and scattered dreadfully through the streets, making it perilous to pass through them. A sheet of lead, 2,000 lbs. in weight, was precipitated from the roof of The Tontine into the yard, falling on the very spot whence five minutes before the mail coach for Doncaster had started out."

It made way for a new indoor Market Hall ... 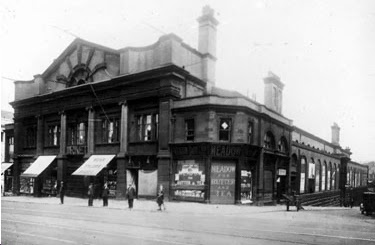 ... on the site of the present Wilkinsons store, formerly Woolworths. But many meat, fish fruit and veg outlets were still trading from various locations round the ancient castle site. An indoor fresh food hall was desperately needed.

That would be £55 million today! Bet his duke-ship was laughing all the way to several banks.

This piece of news is well hidden on-line (couldn't find anything about it) but, better late than never!

The local press is more concerned about cars driving on to the bus lane ... 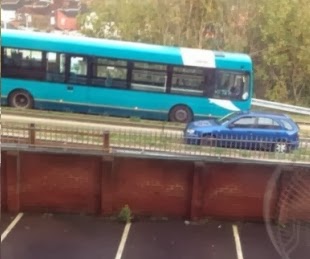 ... and, in so doing, bursting all their tyres in the anti-car traps. 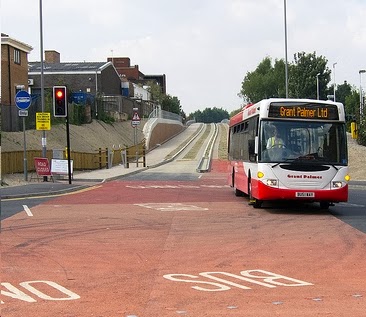 A driver in Luton said: “I was at traffic lights and the SatNav said to go straight on. I didn’t see one sign at all except a 50mph speed limit sign so I started to accelerate. 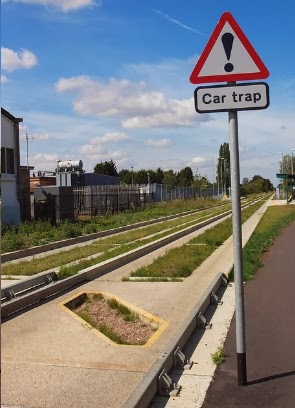