The West Yorkshire Road Car Company had, for many years, run buses to the Yorkshire coast. 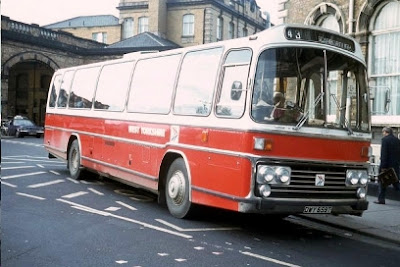 Various route numbers have been used ... 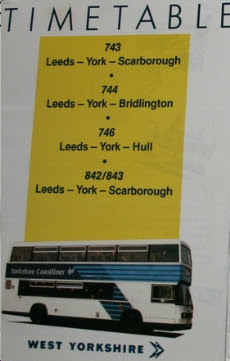 ... and, under National Bus Company ownership, the brand "Yorkshire Coastliner" was created. 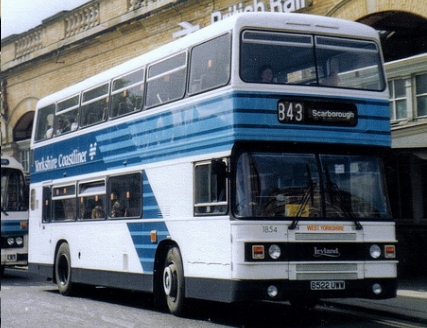 With privatisation, the brand was developed and the logo became more swirly! 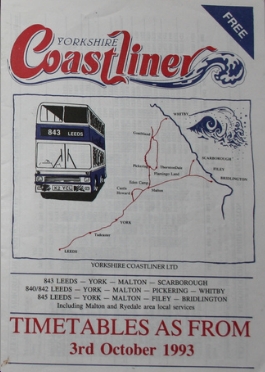 The modern service settled down to offer a 30 minute frequency between Leeds, York and Malton; continuing forward to Pickering and Scarborough each with an hourly service. Over the years more and more Pickering buses have extended across the moors to Whitby.

But the status quo was set to change.

In 2009 the equilibrium was well and truly upset by First Bus with a competitive route X64 between Leeds and York. 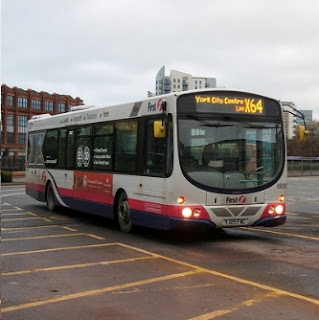 Yorkshire Coastliner's response (still under the ownership of Blazefield) was "vigorous"! The Monday to Saturday daytime service between Leeds and York was doubled to every 15 minutes. The new 844 route was faster than standard by missing out some of the wiggles and ran across the city of York to Heworth. 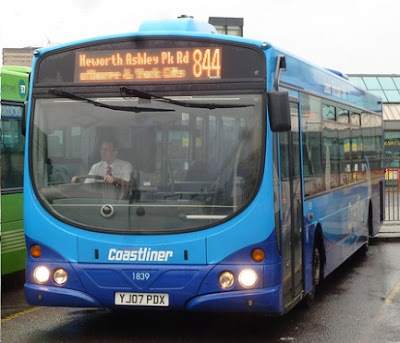 First Bus did not last long! 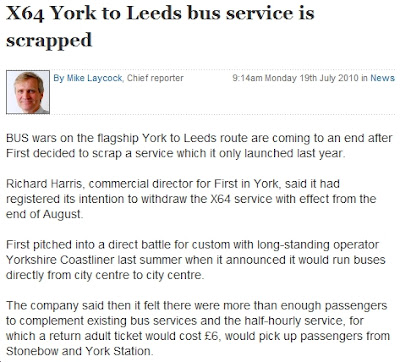 Having seen off First, Coastliner decided to keep running the 844 and in its most recent Transdev incarnation it has taken up the wiggle route; leaving the longer distance services to run "fast". Instead of going to Heworth, the 844 was diverted to run to the University's Heslington Hall. 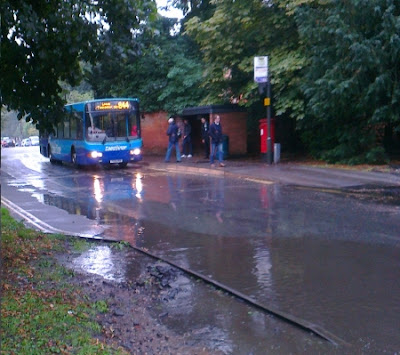 Readers will remember it was raining for fbb's 2nd outward run to the Uni. Note the huge puddle bottom right which contrived to give fbb a nice (?) unexpected shower as he crossed the road. More drips for the big drip?


It is not entirely clear why Transdev runs the 844 to the University. To maintain the four "Coastliner" buses an hour frequency through York city centre, the 844 ("Non-Coastliner") runs to Stonebow; then cuts back to the Uni via the Morrisons bus only road ... 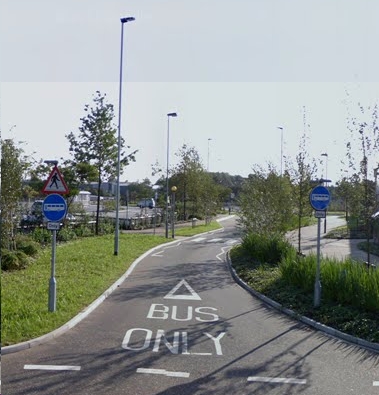 ... an expensive bit of infrastructure served only by the 844 and the Grimston Bar park and ride. The 844 is very much the "long way round". Not surprisingly, fbb was the only passenger from York to Heslington and the bus left empty on its watery way back to Leeds! Perhaps, when the students return en masse, lots of them go to Morrisons for their groceries?

We are beginning to see how useless Transdev's on-line route maps are. Created by an overlay on Google Maps, the outward version for the 844 is hopelessly wrong ... 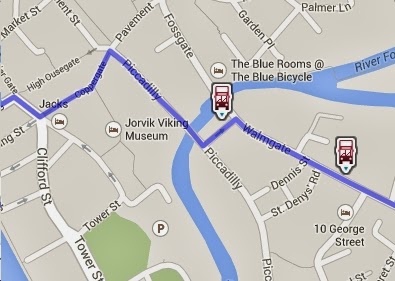 ... ignoring the route via Stonebow (a continuation of "Pavement", top of map). But the map for return journeys from University via York is correct ... 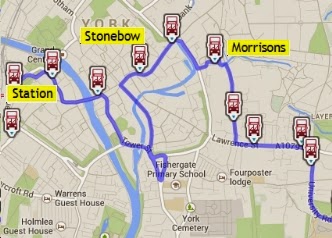 ... between University (off map bottom right), Morrisons and Stonebow; and then complete and utter drivel squared between Stonebow and the station. It is absolutely unbelievable that supposedly professional and responsible companies should allow this garbage to be provided for their paying customers. Shame on you, Transdev. [The black on yellow labels have been added by fbb.]

Tomorrow, we complete the story of buses to the University of York with a review of First's response(s) to the intrusive Transdev. 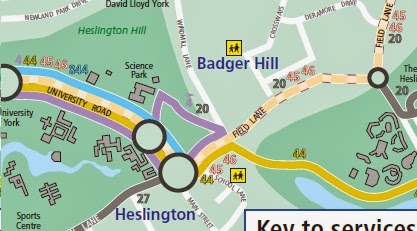 In the meantime, and in the interests of completeness, please note that East Yorkshire's all stops routes 45 and 46 from Pocklington (etc) now operate via Field Lane and University Road. Orbital (tendered?) service 20 (Transdev) ... 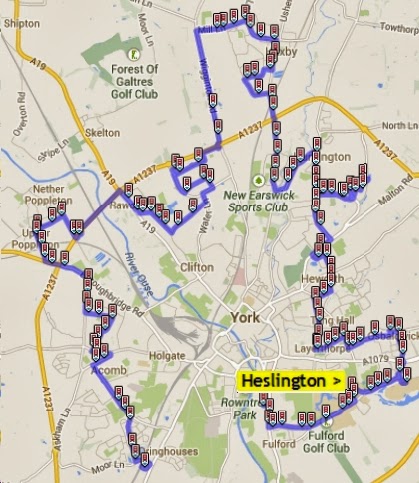 The hourly 27 from city via Fulford calls at Heslington Hall. Transdev has just lost a batch of tendered routes to Arriva including the 26 and 27 ... 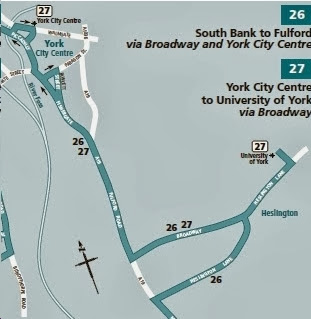 ... so now we benefit from Arriva's excellent standardised route maps.

There are 191 people aged 100 or over who are still legally allowed to drive on UK roads, according to figures published today. 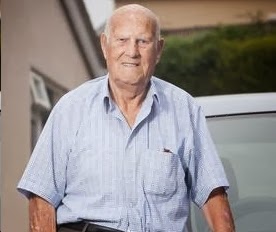 Centenarian Les Hale has been driving for 70 years and reckons he is still “pretty good” behind the wheel. The former bus driver, who turned 100 in July, accrued just two motoring convictions over all those years: a speeding offence about 30 years ago and another for obstructing the road. “I enjoy driving… I’m pretty good,” he said. However Mr Hale, of Lydbrook, Gloucestershire, said he was “thinking about packing up now. I think I’ve had enough [of driving]. The insurance premium for his two-door Ford Escort has also risen from “£100 and something” when he was about 90 to nearly £400.

The article was accompanied by a poor quality picture of Les (aged 65) and his bus. 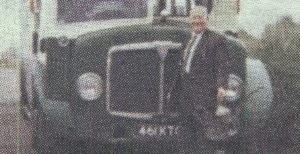 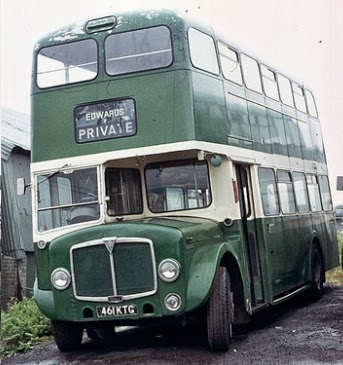