Along the Hull Road! 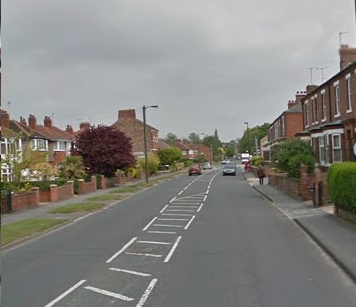 Back in 1999 Hull Road was served by route 10 to Stamford Bridge, a selection of East Yorkshire routes via Pocklington to Bridlington and Hull, service 15 to Osbaldwick and the Grimston Bar Park and Ride which ran non stop into the city (all shown as pink on the map).

Creeping into a diagram from that date were service 4 and 5 via the University and Badger Hill estate to Osbaldwick (orange) and service 7 to Tang Hall (yellow).

In a variety of reorganistions the Tang Hall route (now route 6) was extended to Osbaldwick, the Park and Ride (now route 8) gained an extra stop for Badger Hill; and University buses went no further than, surprise surprise, the University. 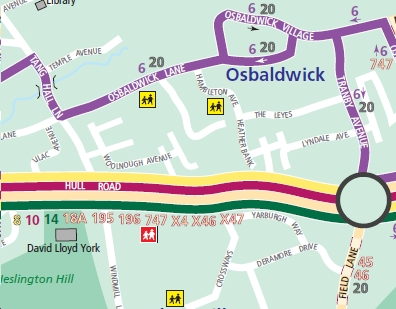 The Park and Ride services are a bit of an oddity, certainly as regards old fogey card holders. If they get on at the car park site, oaps have to pay 70p single (all day after 0900, adult single £2 before). But journeys from all other stops (including from city to the Park and Ride) are free after 0930. "Normal" adults pay £2.40 return form Grimston Bar but standard fares from the Badger Hill stop.

This change left Hull Road with only the Stamford Bridge 10 as a "normal" city bus route. The most recent alterations brought a surprising newcomer, namely route 14, running every 30 minutes. So a dripping fbb decided to start his University investigations by taking this route from the railway station to its terminus at the Sport Village. And we all know how enthusiastic fbb is about his sport - avoiding it, that is! 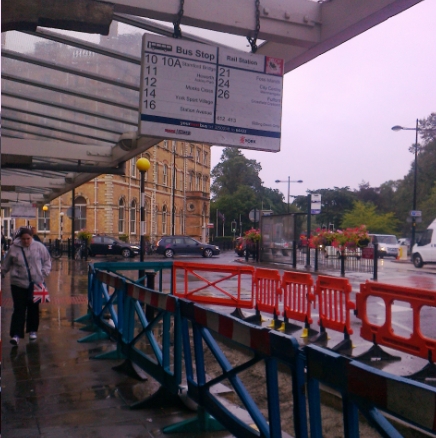 Stand B2 was not inviting, whichever way you looked at it! 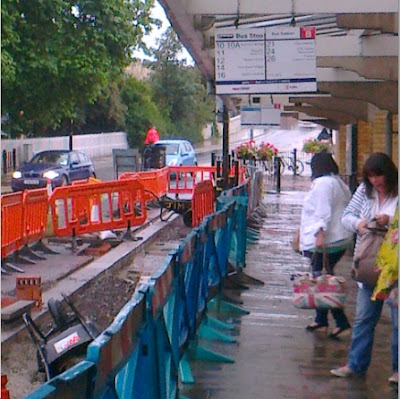 The timetable frame had been used for collage work by a pre-school playgroup ... 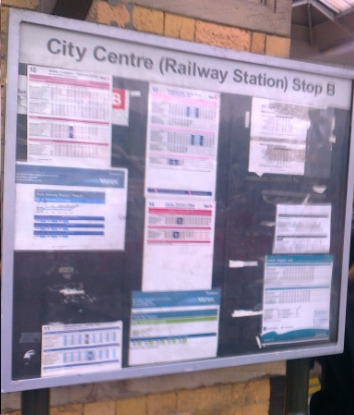 ...and no-one had any idea where the bus would stop. The system in operation seemed to be as follows:- Peer through the downpour and spot your approaching bus. Watch closely to see which arbitrary bit of road the driver might choose and then run suicidally round plastic barriers and other assorted buses in the hope you might get to the stop before the bus moved off.

Welcome to the helpful world of 21st century public transport! fbb's 14 pulled in to stand D.

Presumably this route had been introduced for the benefit of the crowds of passengers eagerly clutching their leotards and swimming cozzies and thirsting for self mortification at the sports cente. 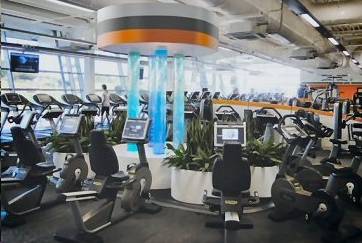 Sport Village torture chamber
OR the set from the 50th anniversary Dr Who episode?

Except that there weren't any. A few locals used the bus to stops on Hull Road but fbb was the only taker for the short ride into no mans land before arriving at the terminus. 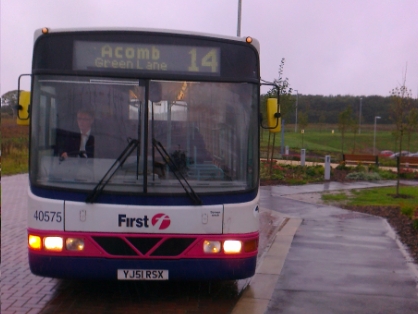 Not surprisingly the evening and Sunday service had already been withdrawn and at the end of this month the whole service disappears.

The pictures above and below ... 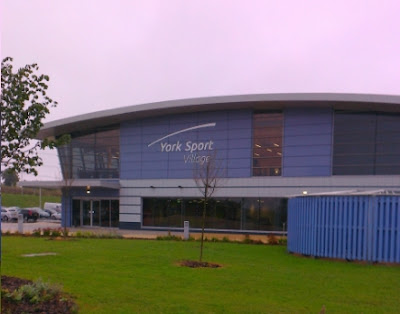 ... simply do not do justice to the delights of York Sport Village in a torrential downpour. fbb did not linger; for his plan was to change buses in the rain-soaked wasteland; joining Transdev's 44 for the return to the railway station via the university campi and York city centre. 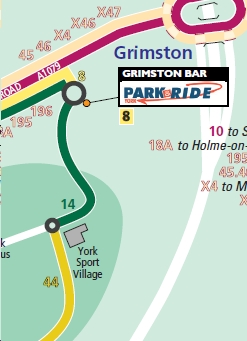 The sacrifices that the old man makes for his literary craft are just astounding. [Or just lunacy - a Mrs fbb opinion.]

At least there was a shelter!

A company called Jumbocruiser, hiding behind a PO box number here in Seaton. And this is the whole vehicle, photographed at the recent Showbus rally by our Northampton correspondent. 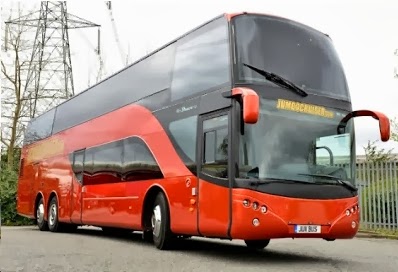 And this is typical interior as illustrated on the company's web site:- 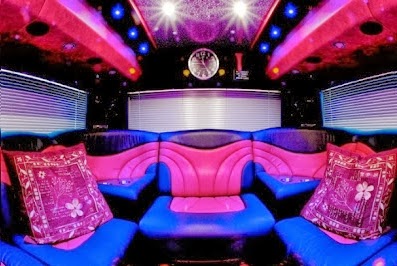 Now that would cut a fine dash on the 885 to Axminster! Sadly the maximum passenger number is about a dozen and the company only does contract hire with pop groups and the like.

"The limousine with beds" Carrying up to 17 people including the driver(s), each coach has a unique layout and style. Our premium coaches feature “Tempur” style mattresses for extra comfort! All coaches have UK (free) and European (chargeable) internet, coffee machine, multimedia players, microwave. We do have older double deck coaches.These coaches were our A Grade coaches until superceded by newer builds.

And we can't spell "superSeded"! So who runs the outfit? Or does Auntie Frances have a more lucrative sideline than Axe Valley Travel?

The registered office is in Torquay; some web sites give an address in Newport South Wales and the sole director is quoted as being "Baron Stephen Alaric Lee of Coolock." Fascinating!
---------------------------------------------
LATE EXTRA
Glory be to God for dappled things -
For skies of couple-colour as a brinded cow;
For rose-moles all in stipple upon trout that swim;
Fresh-firecoal chestnut-falls; finches’ wings;
Landscape plotted and pieced - fold, fallow, and plough;
And áll trádes, their gear and tackle and trim. 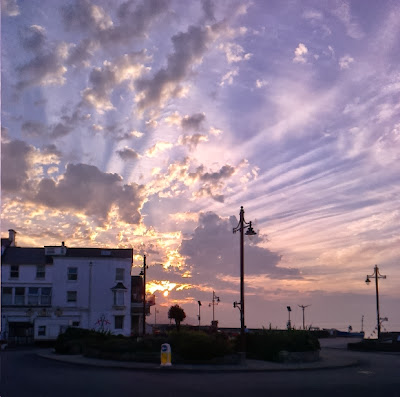 click on the picture to enlarge:-
Marine Place Seaton 0730 today.

Glory be to God indeed.