We left our worthy blogger contemplating the delights of York Sport Village in heavy rain. His aim was to transfer there to the competitive University route, namely Transdev's 44. Thankfully, there was shelter but little useful infomation. 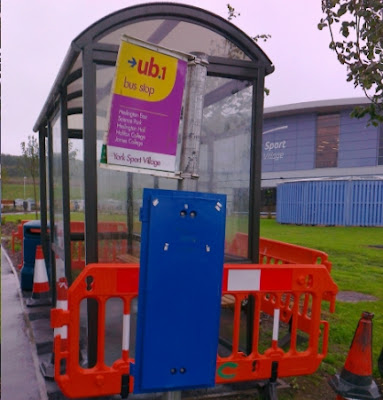 Note the helpful busted blue timetable frame and the flag; neither of which admitted to routes 14 and 44. A closer look at the "UB1" revealed nothing of any more assistance. 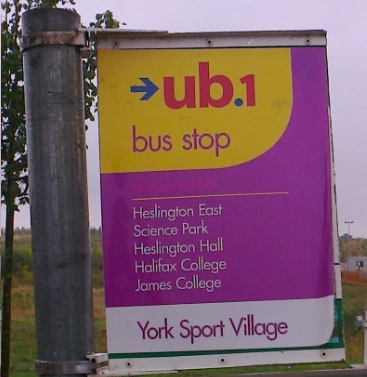 Was this a replacement for the 44? Or had the 44 replaced the UB1? Fortunately a 44 duly appeared leaving fbb to ponder a perusal of available information once back at the B & B. It's a good thing he didn't wait experimentally and expectantly for the UB1 as it only runs during Uni term times! 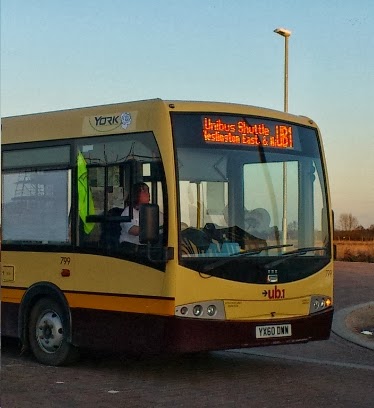 Fortuntely (?) Transdev (operator of the mystery missing motorbus) has details on line including a helpful Google "overlay" map. 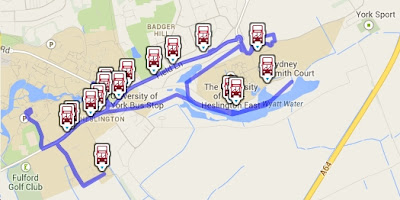 But the line on the map doesn't get to Sport Village (top right). Neither does the map on the on-line Transdev leaflet ... 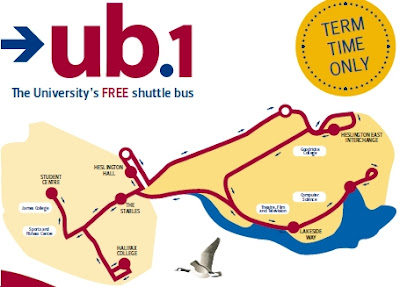 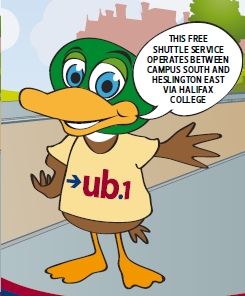 ... nor the friendly timetable!

Thus, whilst everyone agrees that it runs every 30 minutes Monday to Friday during Uni term times, nobody seems to know where it runs. And that includes fbb!

But the 44 duly arrived at Sport Village awaiting the crowds ... 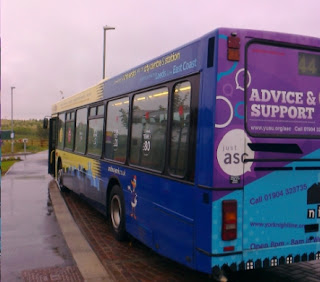 ... of just one; viz fbb. OK, it was vacation time and driver did suggest that "all hell would break loose" when the students came back. The bus was liberally plastered with publicity for the 44 service. 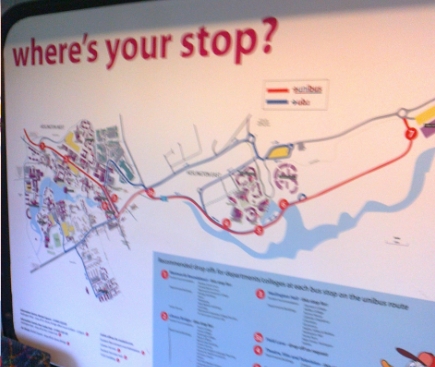 The map was correct, fares were well promoted and the driver carried a rack of leaflets. Hooray! It gave both term-time and vacation timetables; unlike ... 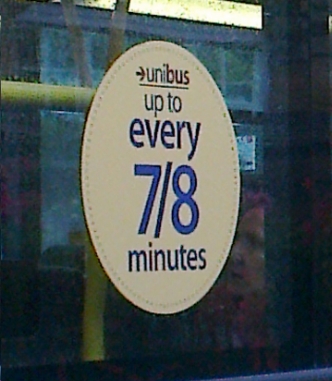 ... the bus itself which was certainly economical with the truth; every 15 at best during the vacation! 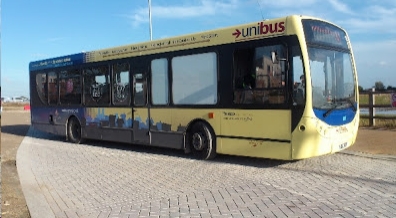 Confidently expecting some weird statuary based on huge bicycle parts, fbb was disappointed to see yet another University block of ... what? 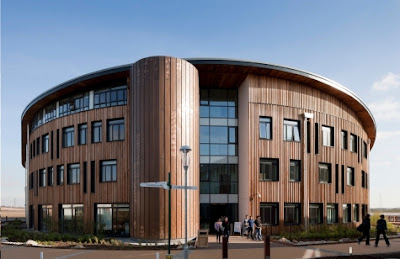 The Hub is a £20 million, 7000 sq ft 'melting pot' for engagement. Its design encourages discussion and interaction, bringing people together across disciplines and sectors, from within and outside the university, providing space for new, value-adding ideas and partnerships to blossom.

fbb is no nearer!

But once back to the traditional older campus, passengers joined, about 15 in all, and mostly with some kind of multi-journey pass. The Management of Transdev has done a deal with the University which labels the 44 as "In Partnership with the University of York".

Number 44 is operated by Transdev, the University of York's preferred transport supplier for both students, staff and visitors. The Unibus service is specially designed to enable easy links between the two main campus sites, York City Centre and York Railway Station. Unibus will provide the free ‘Hopper’ service between Heslington East, Wentworth roundabout. 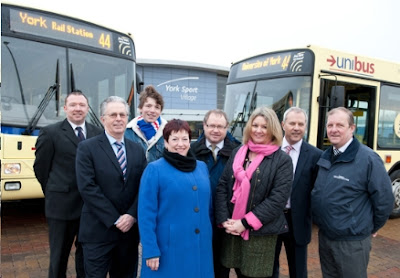 An impressive line-up to cement a good deal all round; lets hope Jim Wallace has got his sums right! Travel is free within the campus areas (as is the destinationally deluded UB1); but, fear not First Fans; Fearnley's folk are on the warpath as we shall seen later. 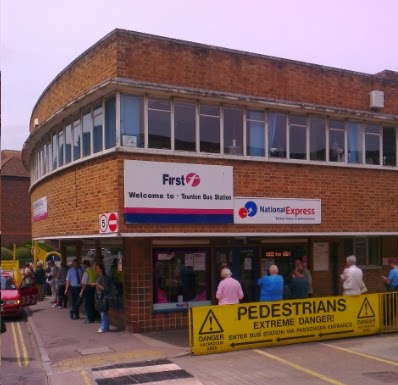 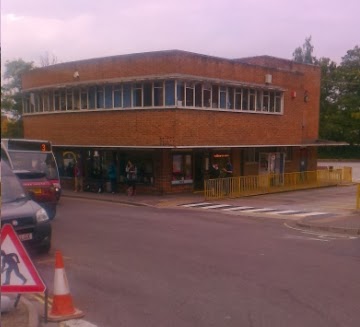 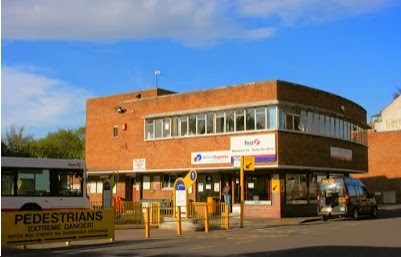 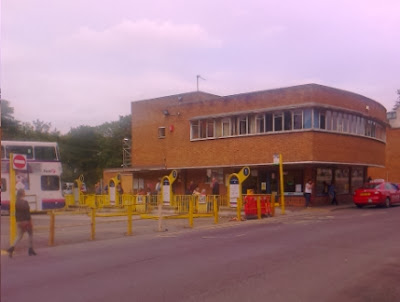 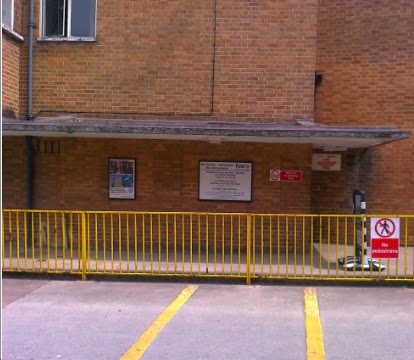 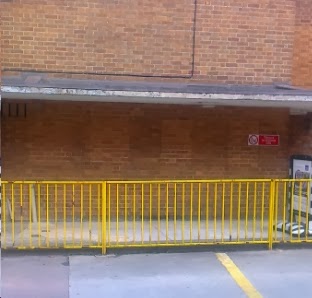 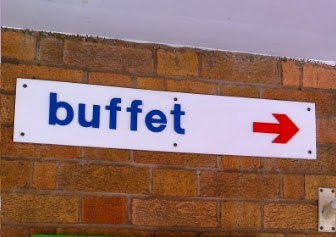 But could it be that the lads at Taunton read fbb's blog? Certainly, the appearance of the bus station is already much better. Let's hope that any replacements are more customer friendly.

When fbb visited yesterday, a little mystery presented itself. What was this FirstBus "Inspector" doing at Castle Way ... 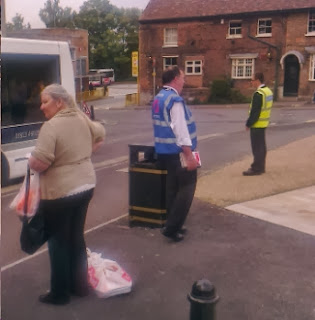 ... when no First buses are scheduled to call there? More to the point, why were all departing First buses stopping at Castle Way and opening their doors? 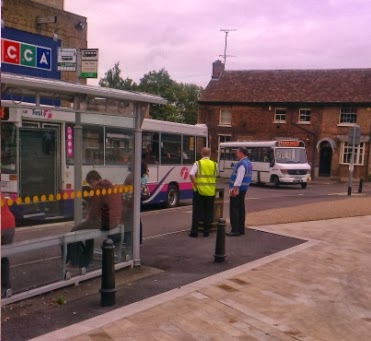 And was this bloke (below), high-viz jacket adorned with "Car Park", a spy from W*bb*rs ... 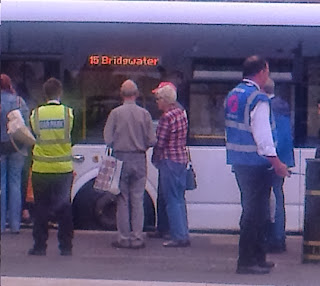 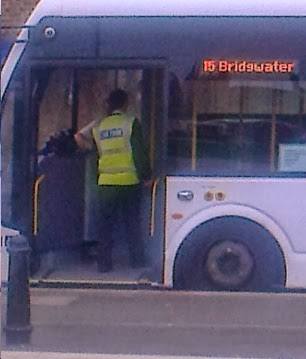 He did not take a seat, but stood next to the driver as the bus departed.

Both were present for over 45 minutes; fbb was unable to stay much longer after "Car Park" left. The Firstbus inspector (who remained on duty) was kitted out with fare tables booklet and radio, but used neither; nor did he make any notes.