The Rich and Emotive Heritage of Scotland

Dateline : Sunday 14th April
Today, the fbb's are returning tom Devon m'dear, having inspected further downsized potential property. To provide a break from the burden of incisive and detailed blogging, we leap ahead of ourselves and report on last Sunday's various omnibological activities. Sorry we're out of order but it will be back to the more serious analysis (?) in a day or two.

Trip 1  : From the B&B, just off London Road, north of Calton Hill to the west end of Princes Street for ... 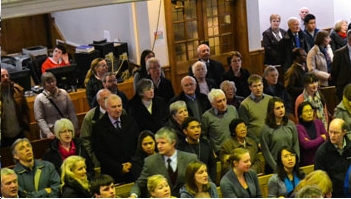 ... Charlotte Chapel - uplifting and challenging with a sermon about telling the truth; something sometimes lacking in the bus industry. Revised fares? Sorry, not in service? Bus 26, every 10 minutes Sunday daytimes, VERY well loaded at 1030.

Trip 2  :  Bus 37 every 20 minutes from George Street, Charlotte Square to North Bridge for a walk down the bottom bit of the Royal Mile. (Actually the Royal Mile and a quarter, but it doesn't sound so good!) 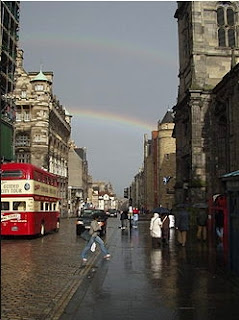 The monarch's official Scottish residence is Holyrood House (as opposed to the unofficial residence at Bamoral). So, presumably, assorted Kings and Queens would nip from house to castle and back along the Royal 2,200 yards to do their kinging and queening. Between the two they, like the fbbs, could enjoy experiencing the rich and proud heritage of Scotland.

There are the ancient souvenir tat shops ... 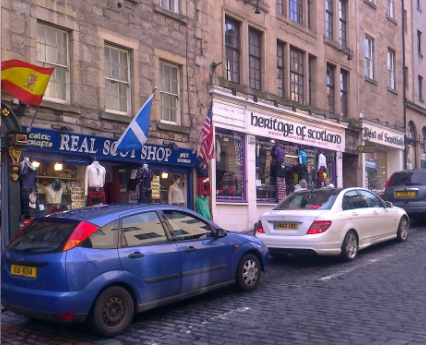 Then there are many opportunities to enjoy the Scottish gourmet experience; as here ... 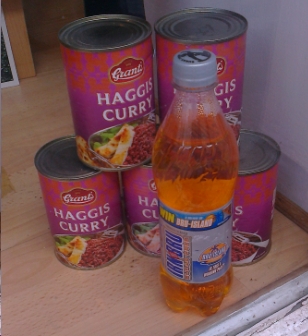 ... with tinned haggis curry washed down with Irn-Bru, (Iron Brew); which used to be tagged "made in Scotland, frae (from) girders!" until some litigious misery-guts objected on the surpirsing grounds that this day-glo orange delectation contains not so much as a single iron filing. Shock horror!

Some tasty morsels get lost in translation ... 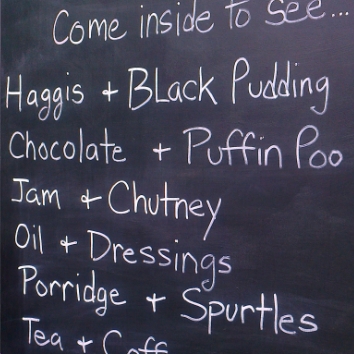 ... but we can only applaud the educational zeal of indigenous chefs as they seek to spread the Caledonian catering creed ... 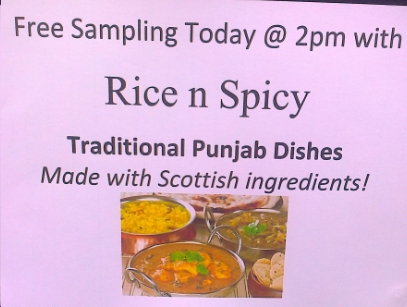 ... to our unsuspecting ex-colonial cousins.

But, if all else fails, there is always that age-old Glasgow delight, copied the world over but never equalled ... 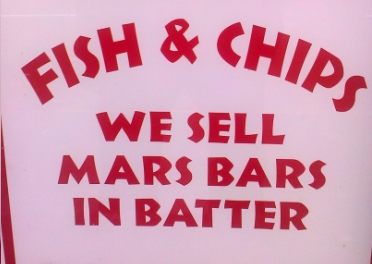 Having enjoyed the Scottish shopping and catering experience from outside the premises, the fbbs had intended to visit the recommended Edinburgh Museum; recommended but closed on Sundays. So after a cup of tea and a bun in a typical Edinburgh tea room, typically run by Italians, it was time to move on. 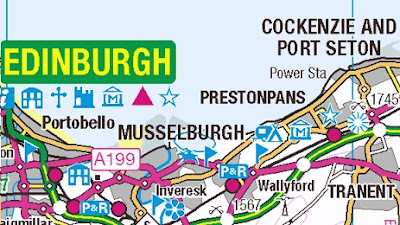 Trip 4  : Service 26 (again) from London Road to Seton Sands, pleasantly busy c. 1400. Firstly via Portobello which used to be a popular holiday day trip or even bucket-and-spade week for Edinburgh's less well-blessed residents. 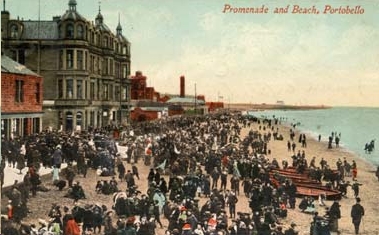 Then, with continued views of the Forth of Firth, on via Musselburgh.

Musselburgh is known as "The Honest Toun", and celebrates this by the annual election of the Honest Lad and Lass. The town motto "Honestas" dates back to 1332, when the Regent of Scotland, Randolph, Earl of Moray, died in the burgh after a long illness during which he was devotedly cared for by its citizens. His successor offered to reward the people for their loyalty but they declined, saying they were only doing their duty. The new regent, the Earl of Mar, was impressed and said they were a set of honest men, hence "Honest Toun."

The Battle of Prestonpans was the first significant conflict in the Jacobite Rising of 1745. The battle took place at 4 am on 21 September 1745. The Jacobite army loyal to James Francis Edward Stuart and led by his son Charles Edward Stuart defeated the government army loyal to the Hanoverian George II led by Sir John Cope. The inexperienced government troops were outflanked and broke in the face of a highland charge. The victory was a huge morale boost for the Jacobites, and a heavily mythologized version of the story entered art and legend.

Apart from excellent sea views, an notable highlight has to be Cockenzie Power Station ... 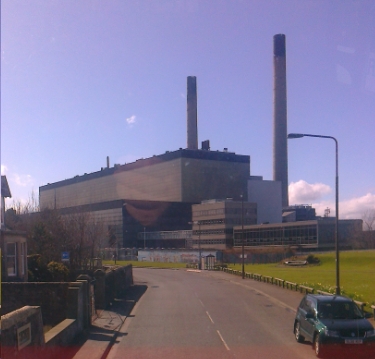 ... once holding the dubious honour of being the UK's least carbon-efficient, in terms of carbon dioxide released per unit of energy generated. It is now closed,

The Seton Sands terminus could be said to lack excitement, offering views of the sea (pleasant) and a caravan site (intrusive) but not so much as a Hamish McSporran tea room or deep fried mars bar in sight. So, having arrived ... 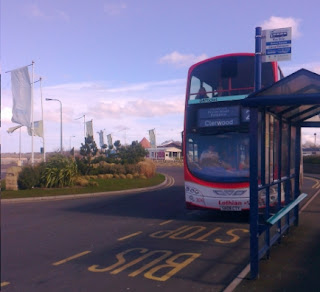 Trip 5  : Seton Sands (26) to Musselburgh High Street for Costa Lot coffee, except they had tea. 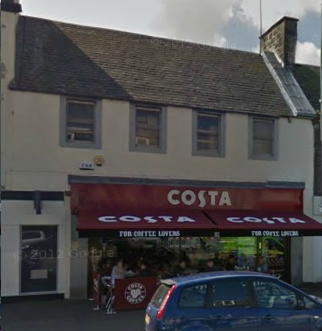 One potential excitement at such watering holes is access to toilet facilities. In St Andrews' Costa Lot you needed the key code printed on the bottom of your receipt and Mrs fbb had already left with self-same receipt slowly turning into oil deposits at the bottom of her handbag. In Musselburgh the safari involved a 24 tread staircase, four right angle corridor turns and six doors.

Trip 6  : As a change from the 26, service 44 (every 30 minutes) back to Edinburgh to sample St Andrew Square bus station (of which more anon), partake of sustenance at Tom and Jerry's? Bill and Benny's? Ben and Jerry's? Frankie and Benny's? A tasty good value meal-in-the-gloom whilst being deafened by 60s pop music.

One event that the fbb's missed whilst in Church on Sunday was the annual Alf Marathon (sic**), as announced on numerous signs around the town. But it was a privilege to grab a quick snap of one of the teams in their traditional highland attire. 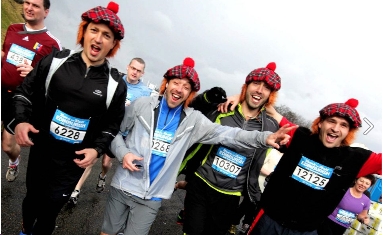 And who can forget the incomparable Sir Harry Lauder ... 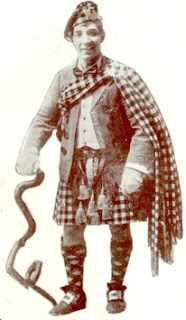 
By Cockenzie, Portobello
And Port Seton I will go,
By Lothian Bus wi' heaven in their wiles;
If it's thinkin' in your inner heart
Braggart's in my step,
You've never travelled cheap so many miles.
Oh, the fried Mars bars are puttin' love on me,
As step I wi' my budget; savin' piles.

** The local McYouff, bored with caber tossing and haggis hunting, had amused themselves by peeling off the "H" : chortle chortle.