What to do to celebrate 40 years of marriage? 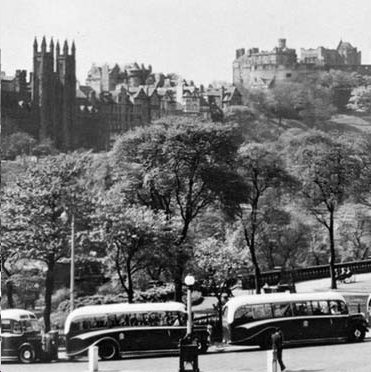 fbb's first visit to Scotland's capital was several decades ago; on a day trip (on the train) with Sheffield Transport staff (perhaps) plus hangers-on; of which one was a less than f bb and another was teenage Giles Fearnley. That boy done good! Sadly we can't say the same for fbb. Highlights of the trip (all fbb can remember actually) were a climb to the top of the Walter Scott Monument ... 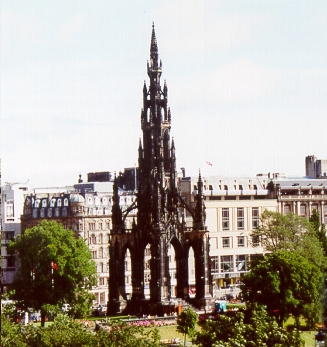 ... (one shilling admission) and a bus tour of the City for the whole party, leaving, as always, from Waverley Bridge, opposite the entrance to the railway station. Realising that the group were "transport people", the driver gave us the full tour; and boy was it full. Accompanied by anecdotes from the nation's gory history (usually involving slaughtering the English, or, less enthusiastically, being slaughtered BY the English) plus loud and emotional renditions of Scottish songs, it was a memorable experience.

So back to Friday (12th April). And fbb and Mrs hied at speed (very slow speed) to Waverley Bridge to seek a re-run.

Back in the late 60s (?) fbb rode on one of Edinburgh Corporation's very latest Atlanteans (?) ... 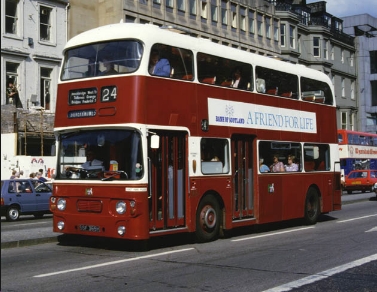 ... closed top of course; the craze for topless tours was yet to develop. The wide windows, however structurally challenging they might have been for the maintenance engineers, were just ideal for sightseeing. Later came open tops ... 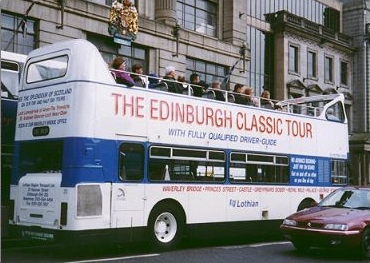 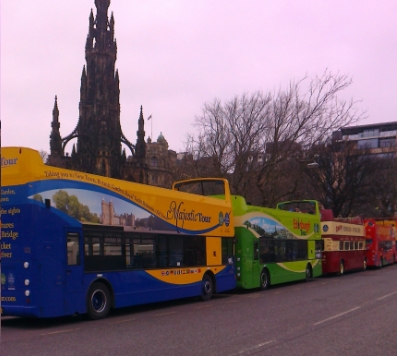 Waverley Bridge os now a riot of colour. From left to right, the  Majestic Tour , the  Edinburgh Tour  ,  Mac Tours , and  City Sightseeing .  Missing from the line-up is the slightly less frequent  World Heritage Tour , and the much longer  Bus & Boat Tour . 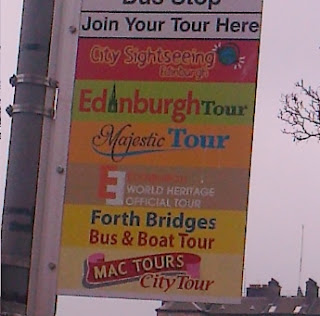 The "Bus and Boat Tour" runs from Waverley Bridge to South Queensferry where passengers transfer to the Forth Belle for a cruise under the two bridges and round Inchcolm Island. 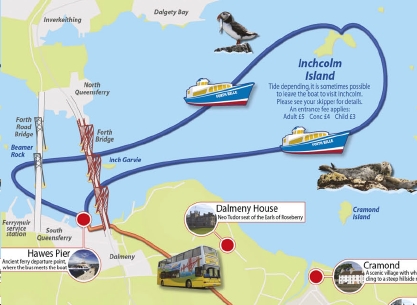 The other five are all variants of a City Tour drawing their selection from the Old Town (which is extremely old), the New Town (which is just very old), The Castle, Holyrood House, Scottish Parliament, the Botanic Gardens and the Royal Yacht Britannia.

At this time of year 14 (yes, fourteen) tours every hour leave Waverley Bridge.

The fbbs took the "Majestic" and broke their journey at The Ocean Terminal which, quite simply, isn't. It is not on the Ocean and nothing seafaring terminates there. It's a shopping "mall"! 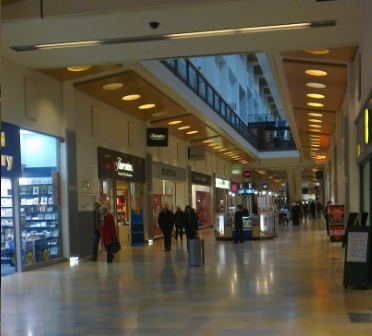 But the Debenhams caff (sorry "restaurant") offered Mrs fbb and her hubby a break from the icy blasts of the open top and the chance of a warming cup of coffee. Sadly, fbb was unable to purchase his usual "Americano" with cold milk but had to make do with black coffee** instead. 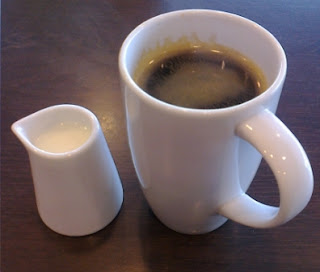 But there was a view of the Royal Yacht, now permanently glued to the quayside. 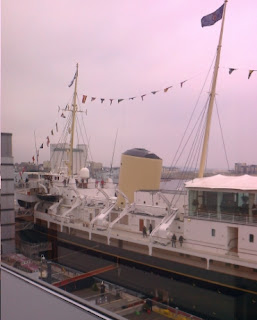 An excellent tour but, as ever these days, over-priced at £15 for a hour's round trip, complete with hypothermia, £12 for old crusties. 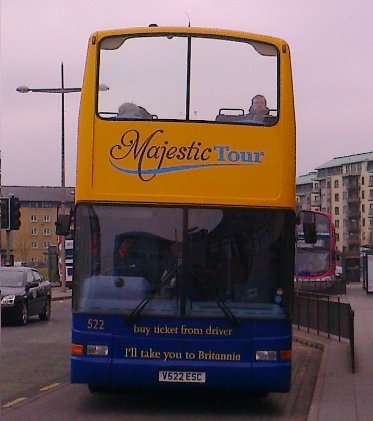 Despite the price, the whole thing is done very well. Gone is the wasteful competition of the past and in its place comes an umbrella management structure, "Edinbugh Bus Tours", which markets and sells the tickets. All five city tours are the same price and for a few extra pounds your day's hop-on-hop-off fare is valid on all five. Bonus!

Useful snippet from the commentary: The 70 acre Botanic Gardens has the largest collection of Chinese flora in the world (apart from Chine, presumably). 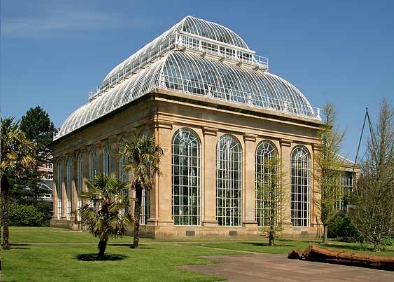 Indeed, when China decided to recreate its gardens after their destruction under Mao's cultural revolution, they came to Edinburgh to re-stock.

There's not much commercial shipping left at Leith (where "the poleeth dithmitheth uth") as it is now almost all posh flats, as here at the Western Harbour ... 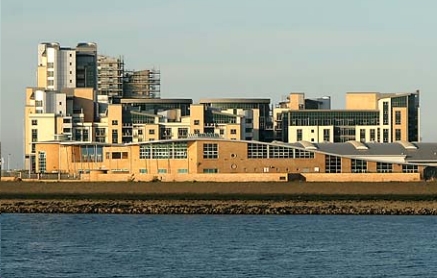 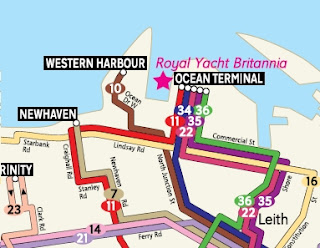 Anyway, the fbb's had completed the tourist bit; which then allowed Mrs fbb to hit the shops and fbb to continue his exciting Edinburgh experiences. Due to the frantic nature of the house sale back on the Island, Mrs fbb's shop hitting was minimalistic as she returned to the B&B for a kip after about a hour during which her only purchase was a bag of pan drops** to delight the chubby one.

fbb went in search of a tram.

1. fbb is aware that an "Americano" IS a black coffee.

2. "Pan Drops" (on sale in small, medium and large sizes) are the equivalent of English mint imperials.