Not an April Fool Gag!

A surprise present from Mrs fbb. 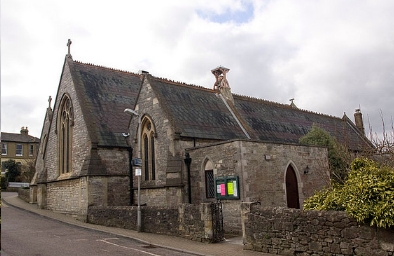 On Holy Saturday [note : NOT Easter Saturday, that's today!], Mrs fbb attended a fund-raising coffee morning in the local village. Sometimes it is a struggle to find something to buy, but this time 'er indoors found just the thing. 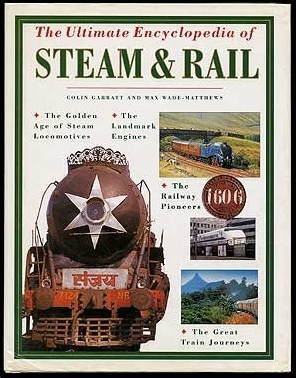 Originally published as two separate volumes but re-published as one in 1999, the contents, although a little dated in places, reveal a rich selection of good things, all in full colour. UK stuff is almost exclusively pre-privatisation but it is the world-wide illustrations that excite.

"Limmat", built by Kessler of Karsruhe (Germany) was the first loco to run  between Zurich and Baden in 1847. 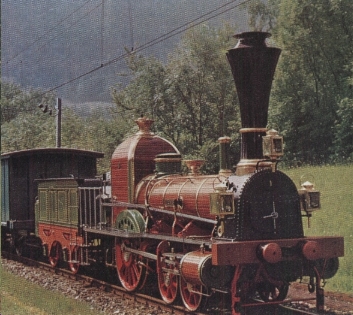 This little creature was built in Glasgow by the very un-scottish sounding firm of Dübs in 1871. It was exported to the Indian State Railways and then sold second-hand to Uganda Railways. 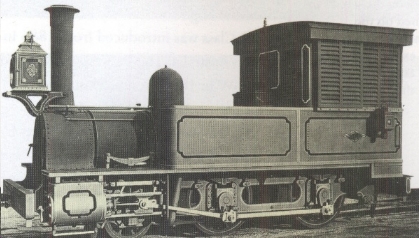 Henry Dübs (1816 to 24 April 1876), born Heinrich Dübs in Guntersblum near Darmstadt, Germany, was a German-born British businessman and engineer who founded Dübs and Company, at one time the second largest locomotive manufacturer in Britain. His locomotive factory in Glasgow was based at the Queens Park Works in Polmadie. In 1903 it became part of the North British Locomotive Company.

The odd looking vertical boilered machine operated on the Rigi mountain railway in Switzerland. It dates from 1873 and is on show st the Lucerne Transport Museum. 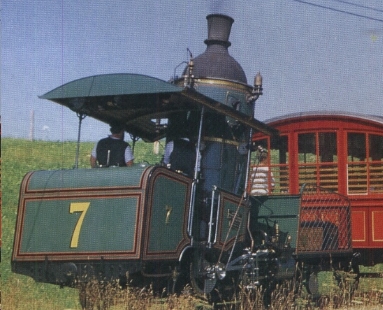 The two lines to the summit at Rigi Kulm still operate but are powered by "overhead"electricity.

Aware of the scenic location of Mount Rigi, Swiss engineer Niklaus Riggenbach masterminded the construction of a railway from Vitznau, on the shores of Lake Lucerne and the southern flank of Mount Rigi, to a point close to its summit. He already had the technology as he had patented, in France in 1863, a system of toothed racks set between the railway tracks interlocking with cogwheels fitted under the locomotives.

Some locos are really weird; this beast being one of the weirdest amongst the hundreds in the book. 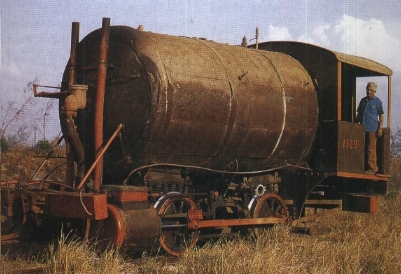 It is a fire-less loco from a sugar plantation in Cuba. What looks like a boiler is actually just a huge tin can that is filled up with steam at a base station. Such machines were often used where the might be a chance of a destructive fire.

And finally from fbb's selection, something big, brash and red!

This huge 4-8-4 was nicknamed a "Red Devil" and was introduced at a time hen modrnisation was being considered. This powerful monster was built to show that steam was still the best. Magnificent, but the class did not last long.

The second half of the book covers a large number of "Great Railway Journeys of the World" but in some ways is a disappointment. With the absence of maps and more pictures of locos than trains, stations or scenery, the excitement is a little muted.

One runs from Asunción to Encarnación ... 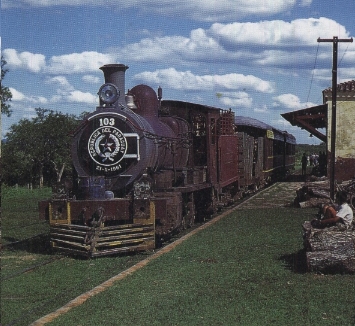 ... in Paraguay. And we complain of a few weeds between the rails in the UK!

And this little lovely was noted in 1976 on a journey from Tanahabang to Rangcasbitung ... 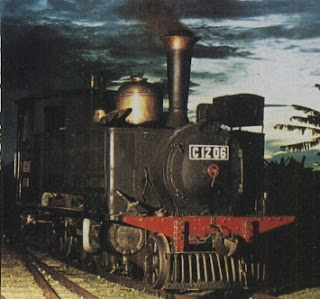 ... on the Island of Java in Indonesia.

Amongst these trips are most of the main lines in UK, but turn over to page 330 and you find this Great Rail Journey of the World: 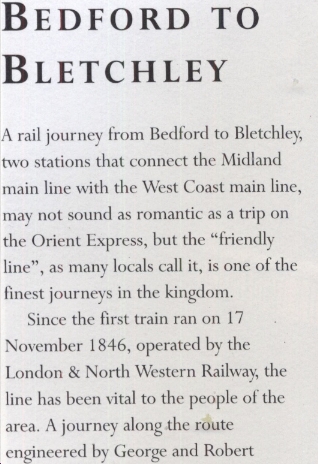 And it is not an fbb wind-up. Pictures of a "classic" DMU in Network SouthEast livery, first at ... 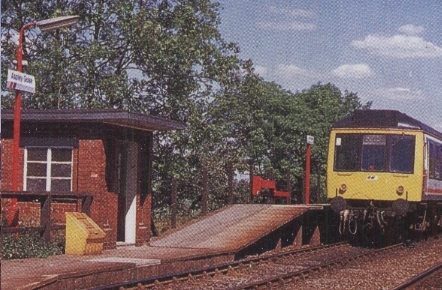 ... Aspley Guise and later alongside the now-defunct brickworks near Lidlington. 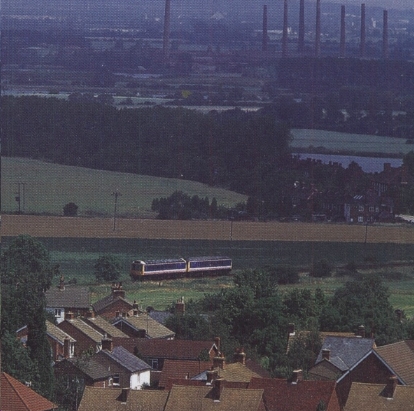 Now fbb is sure that the line has its delights, but the scenery is flat and uninteresting. The stations are now minimalist unstaffed halts and nowadays the line's rural nature is compromised by the expansion of Bedford and the new city of Milton Keynes. More suburban feeder service than cute UK branch line?

Having been effusive in his adulation of Mrs for such a considerate purchase at a profligate 50p, fbb turned to the Amazon site to find the illustration that heads this blog.

And there you could buy a second-hand copy (like fbb's) for ...

... one penny. Mrs fbb had spent fifty times more than she needed.**

**Perhaps not so profligate, however, as she would have had to pay £2.80 postage. 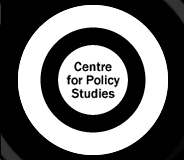 ... an independent think tank - with a thunderous mission statement.

But it cannot go entirely unchallenged. For example, "GB rail fare are the highest in Europe." You could equally well say, "GB rail fares are the lowest in Europe." Some are higher, some are lower; it is hard to compare apples and pears. "GB subsidy is increasing." But it is still lower than the total subsidy for most European rail networks, much of which is well hidden within various government departmental accounts. Despite these quibbles the video is good fun. fbb hopes your confuser is clever enough to play it.

In some ways the story of Thomas is one of fbb's favourites. He was, most definitely, not going to be swayed by emotion, over enthusiasm and peer pressure.

One of the twelve disciples, Thomas (called the Twin), was not with them when Jesus came. So the other disciples told him, “We have seen the Lord!” Thomas said to them, 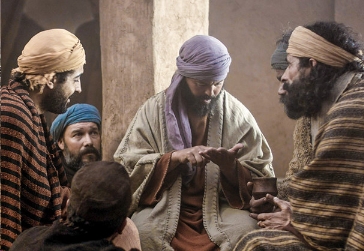 “Unless I see the scars of the nails in his hands and put my finger on those scars and my hand in his side, I will not believe.”

There is nothing wrong with doubt. What is wrong is being unwilling to explore answers to our doubts. We don't have the privilege of direct access to Jesus in the flesh as Thomas had later ...

A week later Jesus came and stood among them and said, “Peace be with you.” Then he said to Thomas ... 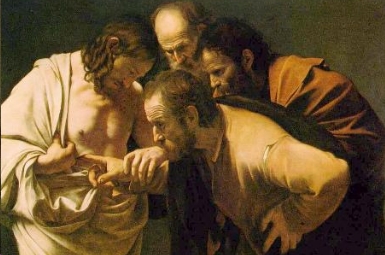 ... “Put your finger here, and look at my hands; then reach out your hand and put it in my side. Stop your doubting, and believe!”

... but we can rely on the millions of believers whose lives have been radically changed for the better through a genuine relationship with Him; on the massive amounts of documentary and historical research which support the Bible narratives; and, ultimately, on the strength and peace that comes from our own personal walk of Faith. Stop your doubting, and believe.