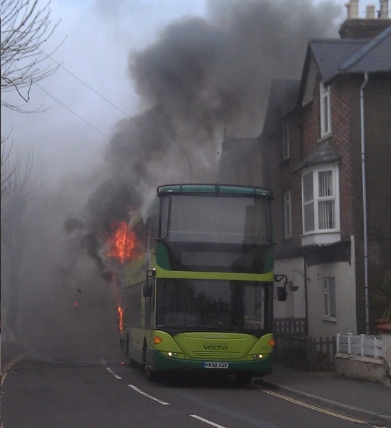 Back to Edinburgh ...
Dateline : Mostly On-line
Tours and Trams are Special.
What about the day to day?

A little family video on YouTube focuses mainly on Edinburgh Corporation buses in the mid 1970s, with the wide-windowed Atlanteans sharing the road with a few remaining half cabs. The corporation system was typical, operating almost exclusively within traditional boundaries and doing a good if unspectacular job.

Privatisation legislation was intended to force all Councils to sell of their buses but fear of loss of votes in some areas meant that "arms length" companies were permitted. This meant that the company was independent of the corporation but the latter could be a majority shareholder.

Edinburgh is the only such company in Scotland to remain council owned, albeit renamed Lothian.

Its operations have expanded way beyond the city limits and the company's superiority has "seen off" the incumbent First Bus, successors to Eastern Scottish, in peripheral towns like Penicuik (Penny-Cook) and Dalkeith. 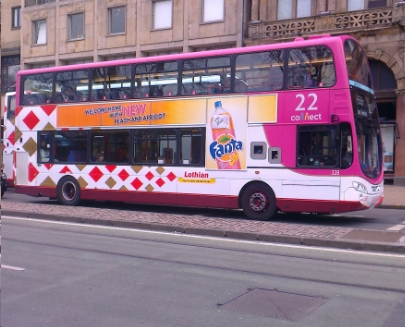 Its recent rather avant-garde "harlequin" livery has given way to something more staid and more symbolic of a quality operation ... 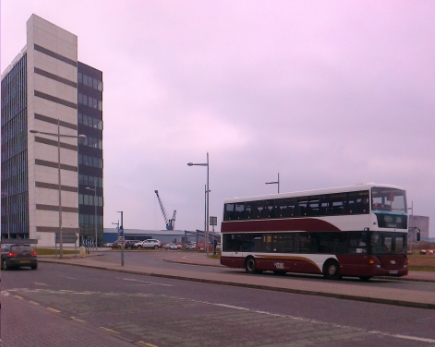 ... using traditional colours in the style of the former Hull Corporation. The white is replaced by gold for hybrid buses. 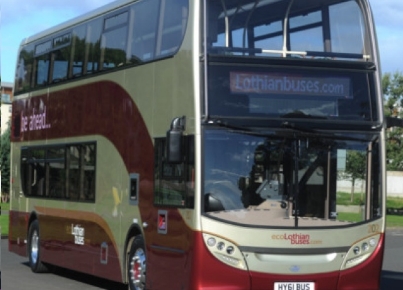 So we begin with smart vehicles.

The web site is easy to use, giving quick access to timetables, unimpeded with twiddly clutter. There is a clear route map with city centre enlargement; the boundary between centre and main map is labelled with letters on each major road ... 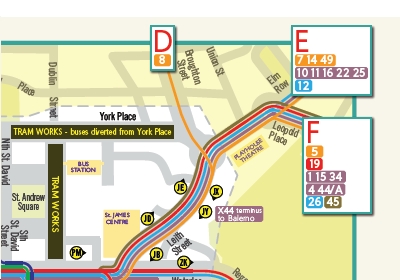 ... and these letters are replicated on thr main map. 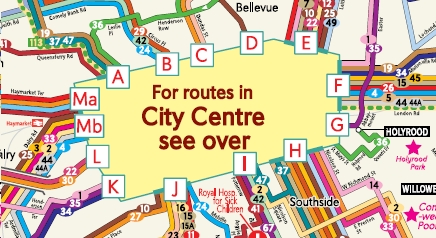 One feature of the operation that stands out is the fares. There is only one! Lothian Buses has a simple flat fare throughout the network which has just gone up 10p to £1.50.** 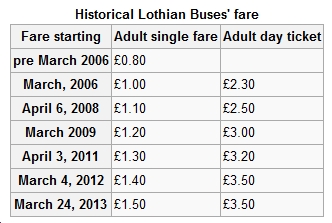 Whilst this appears painful for "short hops", the £3.50 day ticket (with no peak time restrictions) offers savings after only two trips. There are also weekly and monthly deals which reduce costs even further. 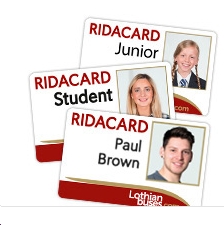 To put this into its financial context, a ride from Seton Sands (east) to Clerwood (west) is about 18 miles and costs £1.50 or about 8p a mile. Laughably cheap! 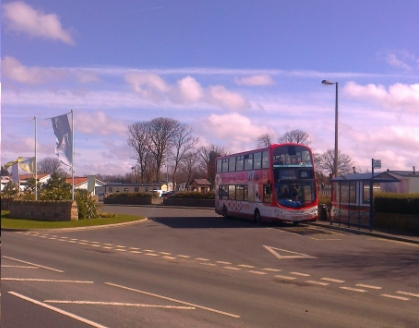 There is an excellent enquiry office just off Princes Street and bang in the city centre ... 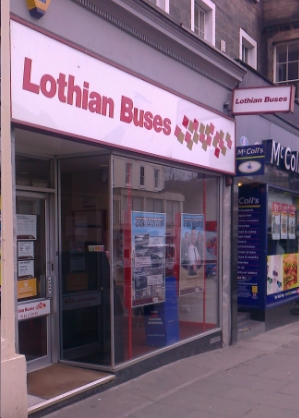 ... where full colour leaflets are available and on display. 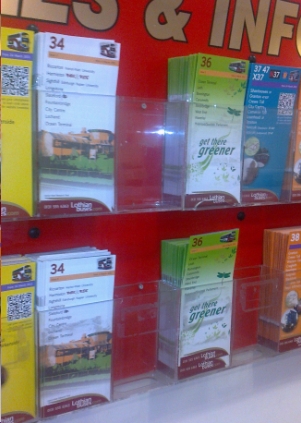 Nothing is perfect, however, and the one leaflet fbb wanted, service 35, was unavailable. Likewise the chubby one had to ask for a route map because "there are only a few left". With modern in-house printing being so cheap and easy, it is surely possible to run off a few of each until full versions can be re-ordered and delivered?

And, "oh joy and rapture unforseen" (HMS Pinafore), Lothian buses don't succumb to the dubious wiles of Traveline, they have their own enquiry number.

With such a splendid on-line and downloadable experience, coupled with a good enquiry office, it only remained for fbb to sample the day-to-day riding delights. So, armed with his day ticket ... 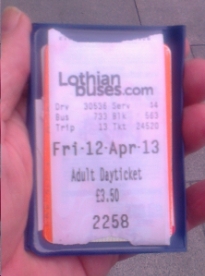 ... your intrepid explorer sets off for a ride to the Airrport in search of a tram as per yesterday's blog. (read again).

** After the partial collapse of First's operations in East Lothian ... 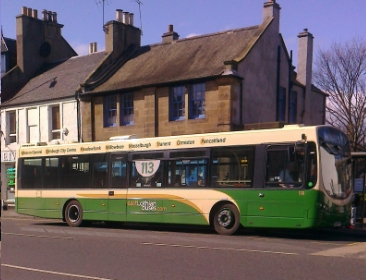 ... service 113 to Pencaitland was taken over by "The Corporation" using a new company named East Lothian Buses. This route has a different fares structure once outside the current Lothian Buses boundary.


Next Bus Blog : Thursday 18th April
Posted by fatbusbloke at 02:00