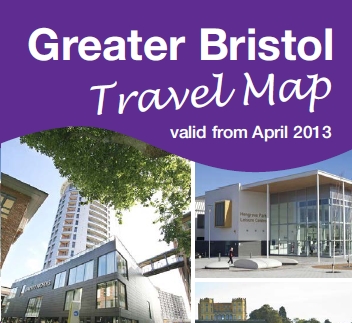 Correspondent Paul, from Brizzle, emailed fbb to advise him of this brand new map. "Greater Bristol" is not defined as such, but the map covers all of Bristol City plus small bits of South Gloucestershire. It is dated ...

... and is a typical quality FWT production. Despite the March date, the compliers have, commendably,  picked up the new services to Portishead which only started late last month. 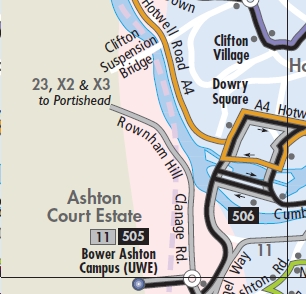 There is a good map of Bristol Centre which makes the best of a bad job in showing the various stops which are spread out over a wide area. It isn't helped by the use of "the Centre", historically "the Tramway Centre", to describe just one little bit of the transport infrastructure; fine for locals but very confusing for outsiders and thickos like fbb! 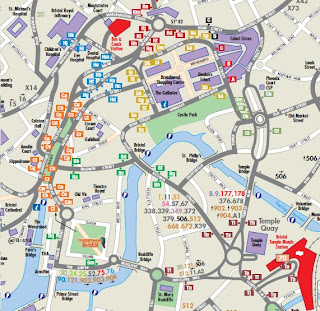 Then there is a route-by-route index to explain which stops each service uses. 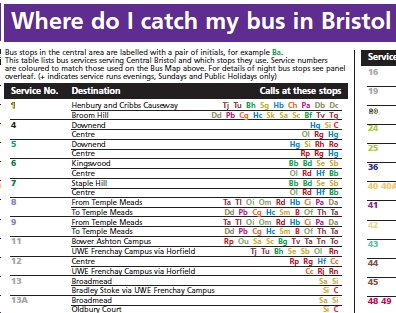 Very helpful indeed - assuming that it is accurate.

There is a list of services with a frequency table. Who uses one of these? What use is one of these? How is knowledge so-gleaned going to help my journey plans?

Grump over, sort of. But the problem with summaries is that, by expurgating complication, they can spread confusion. True, the X2 and X3 together provide a bus every 15 minutes between Bristol and Portishead, but ...

... very untrue for Pill-bound passengers. Their daytime service is every 30 minutes via Pill and route X2 only. There may well be other examples but fbb is familiar with Portishead having blogged (extensively!) only a few days ago. And don't try looking for route 23 between 22 and 24 because it ain't there. You have to know that it is part of the Portishead "network" and look under X2. Surely it should be in both places in the lists?

There's a panel about the regional multi-operator day rover ticket ... 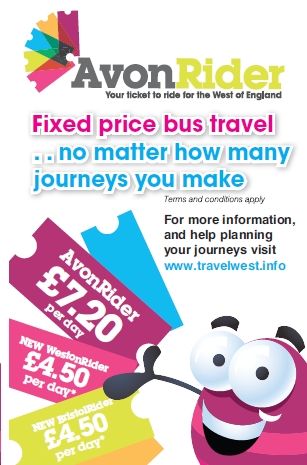 ... and stuff (plus map) about the improved night services ... 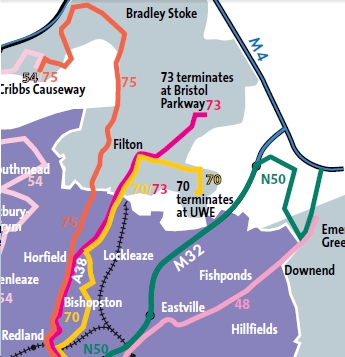 ... park and ride and some very general information about fares. Additionally, there are plenty of contact names and numbers for sourcing more detailed information.

The whole product is a credit to the sponsors ...

... at least it would be if it were correct!

Tomorrow, then, we take a look at the problems.

In the meantime a full PDF copy of the map can be downloaded (here). Beware, 'tis quite a chunky file.

The appearances of the Risen Jesus are always controversial and provoke heated debate. Two things are worth saying however. IF there is a God, then, by definition, He is outside of our space and time and, again by definition, not restricted by our laws of physics. So resurrection appearances are easy-peasy under those unusual but not unrealistic circumstances.

Secondly: for most of the "appeared-to", the last thing they expected was to see an ex-dead body trundling around. 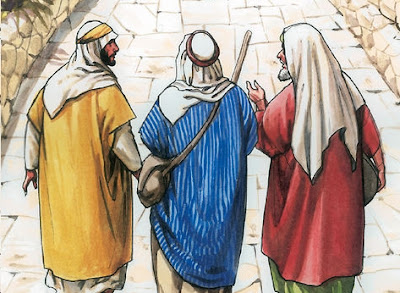 On that same day two of Jesus' followers were going to a village named Emmaus, about seven miles from Jerusalem, and they were talking to each other about all the things that had happened. As they talked and discussed, Jesus himself drew near and walked along with them; they saw him, but somehow did not recognize him. Jesus said to them, “What are you talking about to each other, as you walk along?” They stood still, with sad faces. One of them, named Cleopas, asked him, “Are you the only visitor in Jerusalem who doesn't know the things that have been happening there these last few days?”

The "mystery man" then goes on the explain exactly what had happened back in Jerusalem. The stranger is invited into their home for refreshment, and ...

He sat down to eat with them, took the bread, and said the blessing; then he broke the bread ... 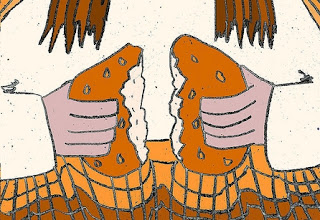 ... and gave it to them. Then their eyes were opened and they recognized him, but he disappeared from their sight. They said to each other, “Wasn't it like a fire burning in us when he talked to us on the road and explained the Scriptures to us?”

We are all extremely capable of not recognising the obvious; either when the obvious is too mind-blowing to contemplate or, alternatively, when we simply don't want to face up to its equally obvious implications.

"Fire burning in us" or ignorance? Our choice.