fbb was greatly thrilled to find this notice in a roadside gents just outside Dorchester. 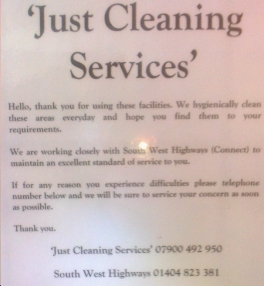 The firm cleans the loos "hygienically"; perhaps instead of using rotting sump oil or bird poo as a cleanser?

And then there is a number to ring ...

... if you experience difficulties. Well, there is this bit of constipation, probably the change of water; maybe "Just Cleaning Services" have the answer?

Sometimes, it is hard to remember how big Heathtow Airport has become. Its bus services back in 1958 were but a shadow of their present scope and complexity. 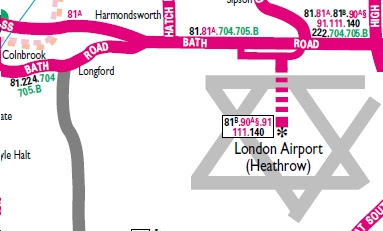 The 81B, which looks as if it might be a variant of the long-standing 81 from Slough to Hounslow, only attacks the airport from the east. The 81 still runs, but doesn't enter the airport complex. 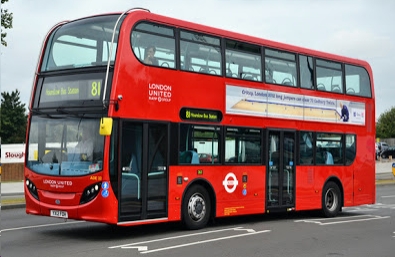 Of course, back in the "good old days" when Heathrow was a few shacks clustered along the A4, it did! 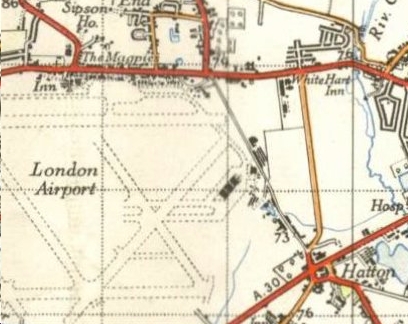 Back in 1999, the great Great Britain Bus Timetable showed routes from Slough to Heathrow as running every 20 minutes ... 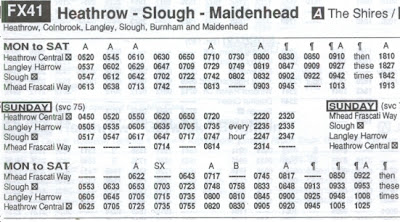 ... which seemed pretty impressive at the time. But now ...

71  is the least attractive of the Heathrow 7s from Slough in that it takes "the long way round" via Windsor, Egham and Staines. Every 30 minutes with a running time of  1 hour and 7 minutes. Although 71s use Heathrow 7s branded vehicles at times ... 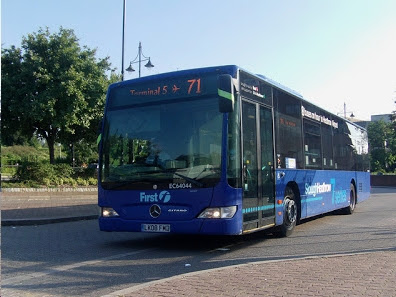 ... it tends not to be included in the overall frequency, as we shall see. The "real" 7s are as follows:-

77  provides the local service between Dedworth and Windsor continuing via Slough and the main London Road to Heathrow. Every 30 minutes with a running time of 25 minutes from Slough.

78  local from Britwell to Slough then to Heathrow via the Trelawney Avenue estate. Every 30 minutes with a running time of 37 minutes from Slough.

71    77  and  78  only run as far as Terminal 5. Regular Heathrow passengers will be aware that all internal travel between terminals by bus or train is absolutely FREE! So onward travel to the other terminals is easy-peasy; unless, of course, you have huge amounts of luggage; which you won't have 'cos it's too expensive to take anything other than a change of undies!

76  local from Cippenham to Slough then on to Heathrow via Langley. Every 30 minutes with a running time of 39 minutes from Slough.

75  from Maidenhead to Slough then on to Heathrow via Langley. Every 30 minutes with a running time of 39 minutes from Slough.

Terminal 4 is not served from Slough but the free travel facility ensures getting there is not at all difficult.

The detail of routes in the Slough area is shown on the map extract below. 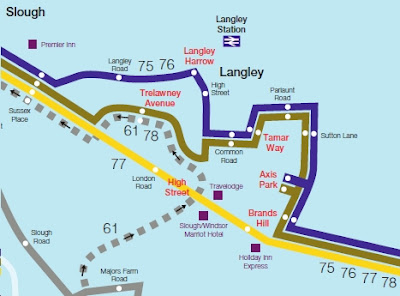 So that adds up to a Monday to Saturday daytime frequency of 8 buses an hour. OK, so some of their revenue comes from local passengers in Slough and Windsor where the 7s have progressively replaced former town routes. Even so, it's a pretty impressive service. 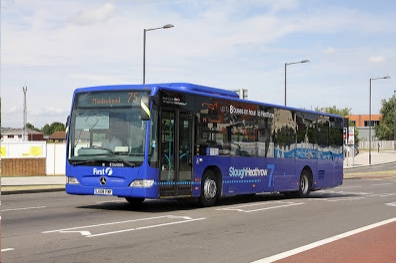 Some of the Mercs are creeping up to their 10th birthday, so "refreshment" would seem to be well overdue. 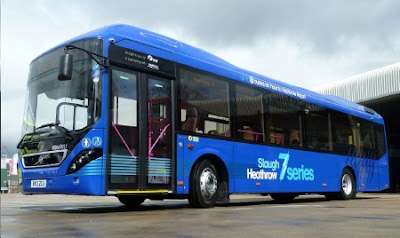 fbb is expecting some pictures of the launch and will publish these as soon as possible. Nothing's come yet!

The anticipation is almost unbearable.


Next Bus Blog : Saturday 20th April
Posted by fatbusbloke at 02:00