On Friday, fbb received a batch of fascinating photographs from trucker chum, David. Amongst some pics of "stuff" in France (furturely bloggable?) was one, oddly, of a single solitary bus stop sign. 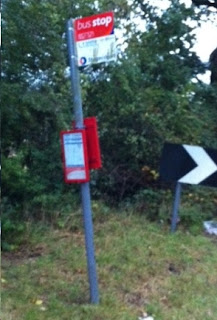 Where was it? David was uncontactable for answers, so clearly this was a job for Eamonn Holmes and Russell Watson, internationally celebrated investigators of public transport particulars. To them was handed "The Case of the Sloping Stop Sign". [fbb may have misquoted the given names of Holmes and Watson???] 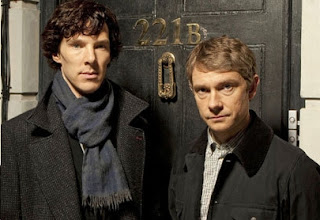 In simple terms, Holmes, we now know that, if we can locate the sloping stop sign, we can solve the crime and apprehend the foul brigand Alec Tronnick, who is hell bent on deceiving huge numbers of innocent and honest people as they go about their lawful duty. But Holmes, we have so little in the way of clues.

Not so fast Watson, we have another photograph ... 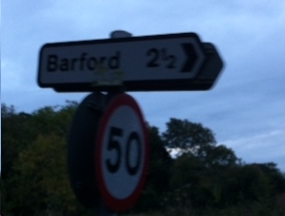 ... so hand me my trusty UK gazetter. I note that there are Barfords in Norfolk and Warwickshire; Great & Little Barford in Bedfordshire; Barford St John & Barford St Michael in Oxfordshire and Barford St Martin in Wiltshire.

We also know that the photographs were taken on a mobile phone owned by the driver of this huge and horrific juggernaut. 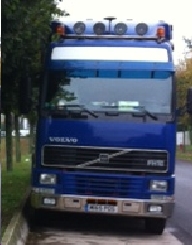 My brother Mycroft has contacts in the Department of Transport and he has examined the driver's tachograph records which, together with my own deduction, show that the vehicle was proceeding from Dover to Wellesbourne, which, as you know, is located in Warwickshire.

Elementary, my dear Watson. The location is close to Barford in Warwickshire and if you pass me my glass ... 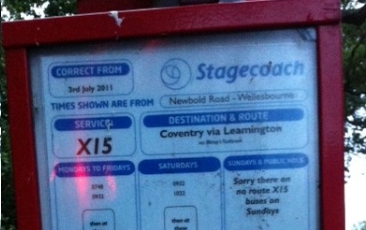 ... it is exactly as I surmised. From this posted rudimentary and ineffectual list of Alec Tronnick's omnibus departures, we are on the route of the X15 stage coach between Stratford upon Avon, home of our Great and Glorious Bard, and Coventry. Pray consult the timetable for me, good fellow. 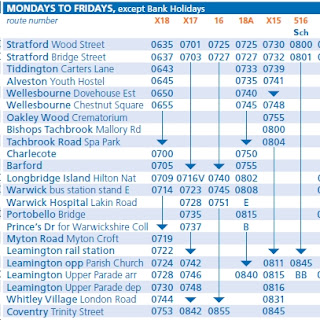 But Holmes, we are defeated once again. The X15 clearly does not go via Barford; for that we need the X18 or the 18A.

Indeed, Watson, and equally clearly you have never read my brief monograph cunningly entitled "Understanding Impossible Timetables for Dummies", available in all good bookshops and stocked world-wide, even up the Amazon. Look closely at the picture again ...

I must confess that I am totally baffled, Holmes.

The sign points TO Barford, Watson, therefore it follows that the sign cannot be AT Barford. So we need to search for a turning to Barford off the road between Leamington Spa and Wellesbourne. I will surmise that our helpful lorry-driving bus stop spotter travelled from Dover by way of the M25 and the M40; so we may narrow our search to the highways south of Junction 13. 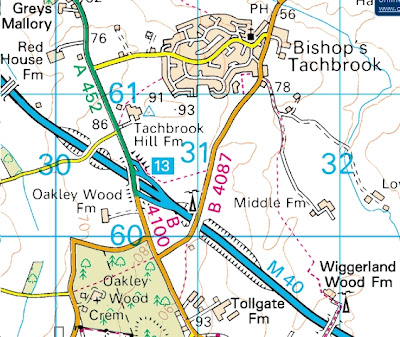 Holmes, your perspicacity never fails to amaze me.

Indeed, Watson, but the treatment I have been having is providing a modicum of amelioration. But, the game's afoot! We shall take the afternoon train to Leamington Spa, rest overnight with our good friend Peter Waterman, and travel on the X15 stage coach southbound until we find the sinister sloping stop sign. Then Alec Tronnik, arch bamboozler of the bus business will be in our grasp.

And so it was that Holmes and I arrived at the bus stop on the B4087 at its junction with Wasperton Lane, part way between Leamington Spa and Wellesbourne ... 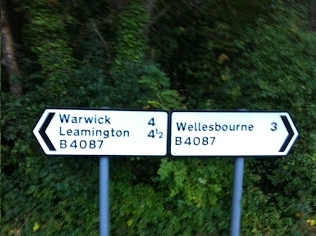 ... and just 50 yards north of the entrance to the Crematorium, as shown on the map above (bottom keft hand corner). And, I would opine fervently, in the midst of nowhere! 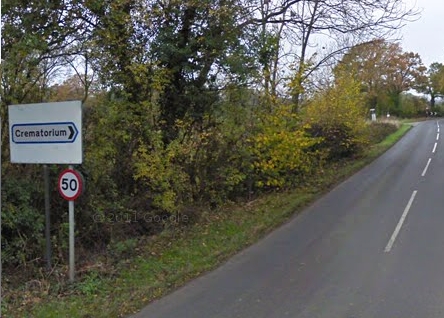 But, alas and alack, despite Holmes' consummate investigative skills and near miraculous insight, Alec Tronnik was nowhere to be seen. But his fiendish computer based evil was still evident as the on-line name of the sloping stop was:-

As Holmes somewhat huffily reminded me, he has an encyclopaedic knowledge of the location of all the nation's crematoria and this one, run by Warwickshire County Council, is called "Oakley Wood Crematorium."  It is not at Bishop's Tachbrook. But then, the stop isn't "opp" the Crematorium either, it's 50 yards up the road, northbound, at the end of Wasperton Lane.  The star marks the spot. 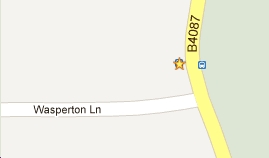 Our quest to rid our society of the disruptive Alec Tronnick will continue. We will not rest until this arch enemy, only equalled in criminal cunning by Professor James Moriarty himself, is safely behind bars.

The "bus stop" and "Barford" photographs were really and truly emailed (without explanation) on Friday last by chum David, but he added the "Leamington Wellesbourne" sign as something of an additional clue.

And a note for the Stagecoach Stop Straightening Squad. This one has been sloping since Google Streetview passed by in 2009! 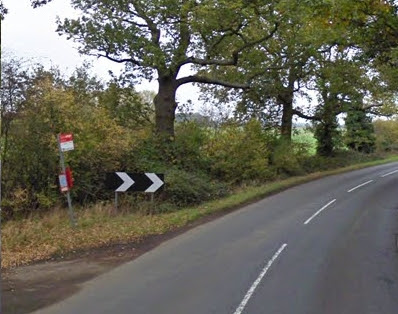 Next Bus Blog : Monday 15th October
Posted by fatbusbloke at 02:00