Which would you choose? Two bus companies competing for business between Plymouth and Ivybridge. 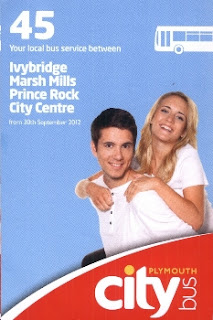 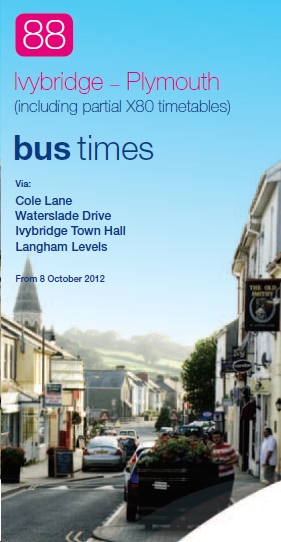 fbb is not sure why we are only allowed "partial" X80 timetables. Surely it would be helpful to potential passengers to include all X80 journeys plus the infrequent 180 offering. Then Ivybridgers could then plan their expeditions with full information. As it is, the X80 journeys only seem to be included at times when the 88 isn't, i.e. evenings and Sundays. Odd? 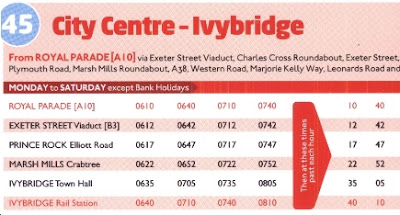 Presentation is always a matter of subjective and personal taste, but fbb considers that Plymouth's corporate red is too harsh; there is too much of it! Their on-line non-leaflet presentation is easier to read.

Both versions seem to make it more complicated than it need be. The service is simple, every 30 minutes starting at 0610; so why not simply say that. Why publish some of the times in full but not all. Perhaps the leaflet designers feel that they must fill all available space. Not necessary.

A more complicated pattern of service made unnecessarily confusing by adding in the X80 intrusions. A separate and full X80 timetable, please; at least for journeys to and from Ivybridge.

There is a panel all about fares; standard offers only, nothing special. But one super bargain item is shown here:-

Sounds a really good deal? But fbb thinks that word "to" should not be there. A glance immediately below it reveals a single fare of £3 from Plymouth "to" Ivybridge. 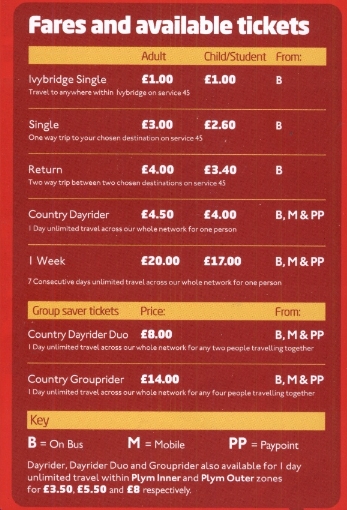 Leave out the "to" and the £1 fare anywhere in Ivybridge makes sense.

"Cole Lane, which is close to Ivybtidge rail station"; really? 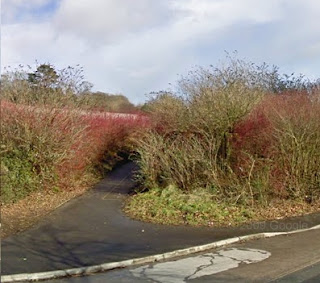 This is the path, creepy and unlit at night, which runs alongside the railway line between Cole Lane and the station. 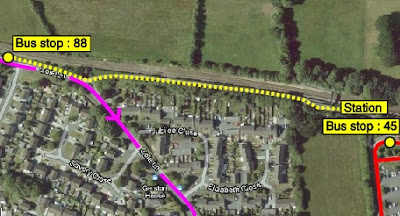 Not ideal; and certainly not a positive marketing ploy. Then there is the embarrassing map bludner. 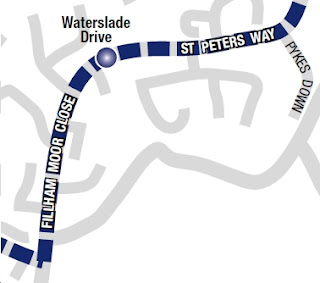 Leaving aside the leaflet cover which implies that buses run via Waterslade Drive when they don't, the map suggests an hourly service via Filham Moor Close. Oh reallly? It is highly unlikely that the residents of this quiet cul-de-sc would appreciate an hourly bus service reversing all over their manicured lawns and pranging their parked cars whilst so doing. The bus runs along St Peters Way and stops near the close. Perhaps First should get a local to draw their maps rather than relying on computer derived inaccuracies. 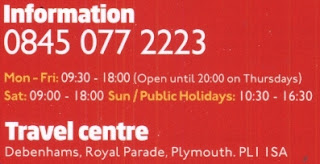 How refreshing to have a local number for local enquiries. Most 0845 numbers are now "free" or relatively cheap for the majority of land-line users and it is really good to be able to talk to the people who run the buses. Assuming, of course, that the calls aren't diverted to Wigan. 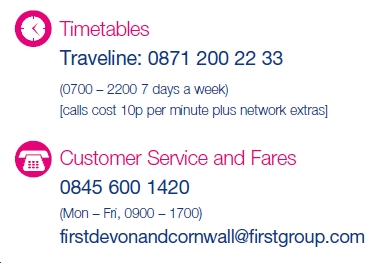 Whereas! You have to pay a premium to find out what First Bus wants to sell you. At the risk of being repetitive (why not, fbb, you are an old man?), there would be an uproar if Tesco made you phone up to find out what brands of beans they sell. Mind you, their profits are 12% down, the first drop in 20 years, so maybe ...

And surely, telling you when the buses run is part of customer service, isn't it? There's a clue in the words.

conclusion
City Bus has a simpler route and a very simple timetable. There is also an hourly Sunday service and telephone information should be heaps better. But First makes a better effort to go where the passengers might be. But you are left with the overriding impression that City Bus is a local bus for local people; First is a big conglomerate that doesn't quite know where it is going, not if their maps and blurb are the basis for an opinion.

Next Bus Blog : Saturday 6th October
Posted by fatbusbloke at 02:30