And difficult it always has been! Dawsons Corner is usually linked with Stanningley, as it's just off this map to the left. The red line is the Bradford Road, so ... 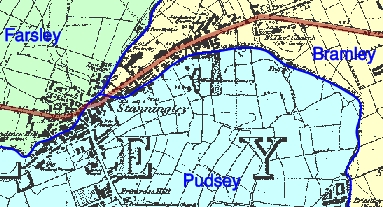 Parts of Stanningley come under three registration sub-districts, two Parliamentary Boroughs and two ancient parishes. Dealing with the parishes first, the parts of the 1852 map (above) in blue and green came under Calverley parish, and events such as marriages and Christenings would be conducted at St Wilfrid's church in Calverley. The part in yellow came under Leeds Parish and events would be conducted at St Peter's in Leeds. The parishes were broken up around 1840 and then each section of Stanningley had it's own church, these being St. John in Farsley (green section), St. Thomas in Stanningley proper (yellow) and St Paul in Pudsey (blue). Pudsey already has a parish church (St. Lawrence) so, confusingly, St. Paul's church is usually referred to as St. Paul's Stanningley.

Regarding Registration Sub-districts, Stanningley fell under three. Calverley with Farsley, Pudsey with Tyersall and Bramley. To find a relative in a Stanningley census return, for example, requires the examination of more than one document. Calverley and Pudsey were in the same Parliamentary Borough and Registration District, which was Bradford, but Bramley is part of Leeds Borough.


To add to the confusion, the present Stanningley has sort of evaporated compared with olden times. Here, a tram passes through residential streets ... 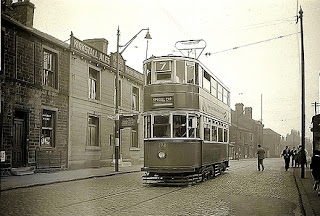 ... but today, the pub is some sort of business premises and many of the houses have been demolished. 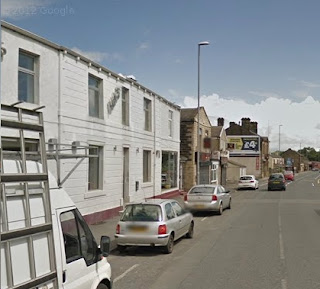 Looking in the other direction, towards Stanningley bottom, the same decline applies. Here are more trams (note the railway arch in the distance) ... 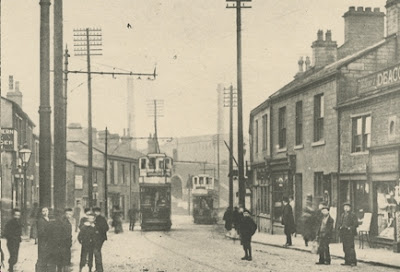 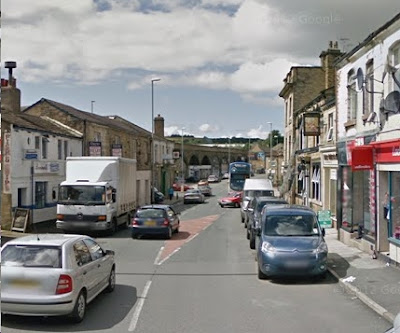 Dawsons Corner, Stanningley?
Travelling a little further to the west we come to Dawsons Corner and once again we need to take into account all the background to the area as outlined in last Friday's blog. (read again). Our researches began by considering buses which terminated at Pudsey Civic Hall which isn't at Pudsey. Because it's on the north of the Bradford Road, Pudsey Civic Hall is probably in Farsley. 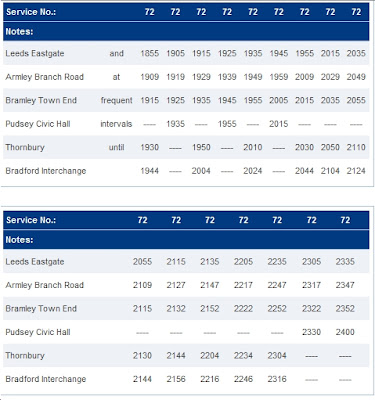 Whilst Metro West Yorkshire uses the Civic Hall as its time point, but, crazily, only for terminating journeys, Traveline has a completely different set of names. 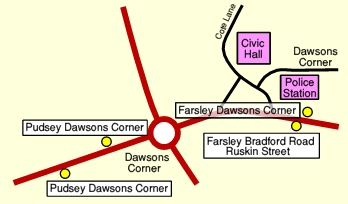 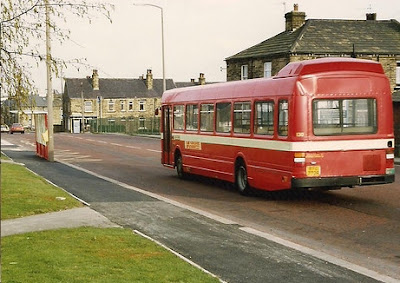 ... from the days just after West Yorkshire's services were absorbed by the privatised Yorkshire Rider is captioned as being at Dawsons Corner; the Farsley version according to Traveline. The right hand side of the road looks much the same today, although, in Traveline-speak it isn't Dawson's Corner. 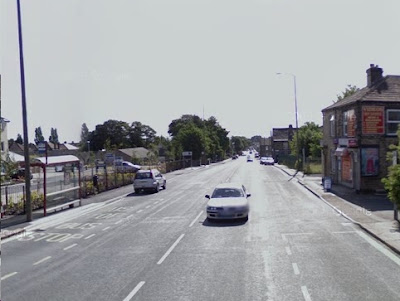 Dawsons Corner, the Road
The Traveline journey planner seems to focus on Dawsons Corner (the road), so perhaps for public transport purposes both those stops should use that name.

Indeed, if Traveline insists a "district" name, then why not create a mini-district of "Dawsons Corner", perhaps with "Fire Station" added for the original location. Then the other set of stops could be tagged "Dawsons Corner (West) Meadow Park Drive". Of course the failed xephos system allows any number of aliases for any stop, so a whole range of options could be included to make life easier and more understandable for the bewildered passenger.

One final victory for obfuscation! Transport Direct, when asked for a journey to Dawsons Corner seems to want to ignore the real and historic location and dump you to the west of the mega roundabout. 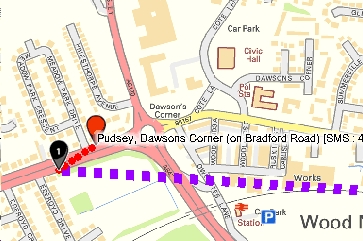 ... or New Pudsey?
fbb is now so confused that, in the unlikely event of a return visit, he will travel by train to New Pudsey Station ... 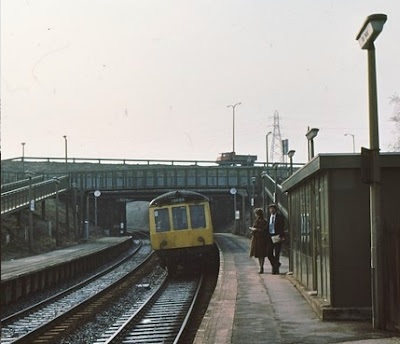 ... which, of course, isn't at Pudsey! His first visit, back in the 1970s, was to accompany a football team (note accompany, not participate) to Priestthorpe School ...

... which lies off the northern bit of the ring road at Dawsons Corner, accessed via this very footbridge. 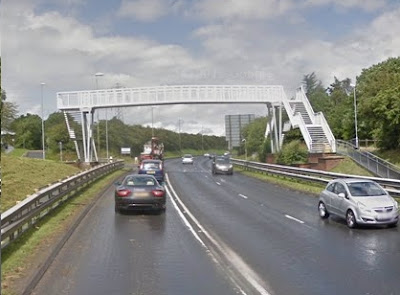 Ah; the delights of youthful endeavour.