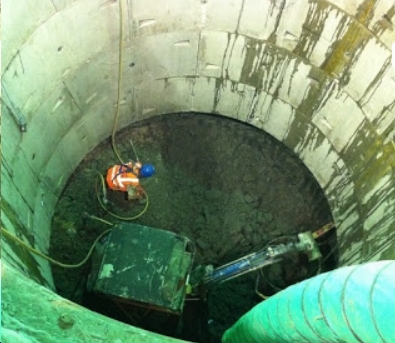 Crossrail’s western tunnels contractor, BAM/Ferrovial/Kier (BFK), is making use of the historic central London subway, closed since 1952, to build an 8m-deep, 5m-wide, grout shaft below the floor of the tunnel. Grout shafts allow engineers to pump grout deep into the ground to firm it and protect nearby buildings from any potential ground movement when tunnel boring machines reach the area in 2013.

The tram tunnel underneath Kingsway once took passengers from Holborn to Waterloo Bridge, providing a link between the north and south London tram networks. 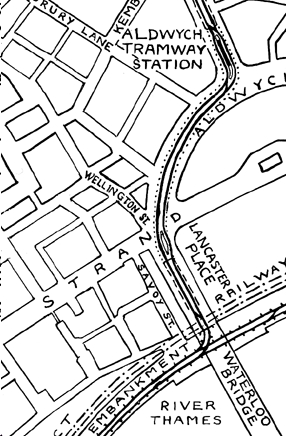 Notice that a tram station is shown at the junction of The Strand, Lancaster Place and Wellington Street. This was never built.

But, despite the implication of the piece above about BAM and their chums' Grout, trams never crossed Waterloo Bridge; but entered the tunnel north of Holborn  and reappeared under Waterloo Bridge on the Embankment. A potted history of the line now follows:-

This was part of a major rebuilding scheme creating Kingsway and Aldwych out of mainly poor grade property.
1906: Opening
The line was, at first, restricted to single deck trams, an example seen her leaving the tunnel at the Holborn end. 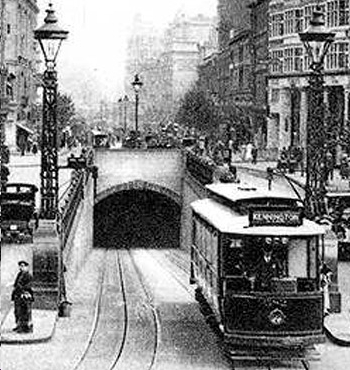 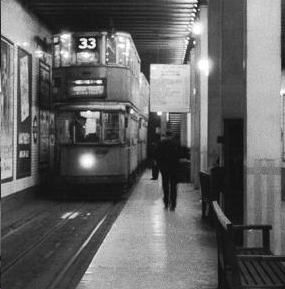 The former exit from the tunnel, taking tracks on to the Embankment, is easily visible today. Like much of the tunnel this chunk is used for storing highways material and other "stuff"; a sad end to a useful piece of public transport infrastructure. 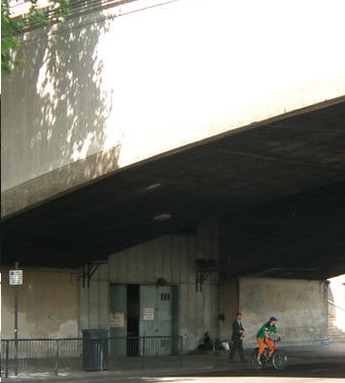 There was a provisional plan to use trolleybuses on services though the tunnel and one vehicle was modified to provide doors on both sides to suit the stops in the tunnel. The trials were unsuccessful and the idea was not pursued. 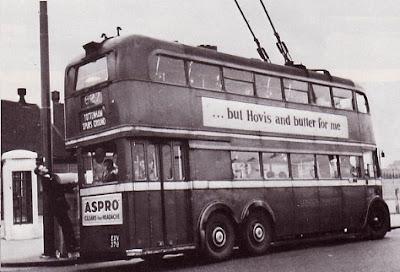 1952–1957: Closure
A section of the tunnel was adapted to provide a car underpass from Waterloo Bridge (north end) under the Strand and Aldwych re-emerging as here on Kingsway. 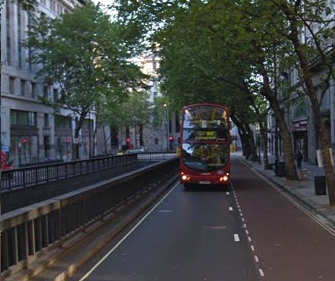 Parts of the tunnel have been open to the public on occasions, notably for an exhibition of "modern art"; and the cavernous depths have featured in several films and a couple of recent TV programmes. In the first series of Steven Moffatt's re-imagining of the Holmes narratives ... 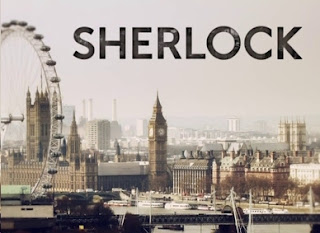 ... some fiendishly bad baddies are based in the Kingsway tunnel.

Holborn. The street leading down to the old tram tunnel. Flashing blue lights.

An ambulance has come to take the corpses. Uniformed police officers cordon off the area. Sarah is lead away with a blanket over her shoulders - shocked but not hurt. Sherlock and John are side by side as they emerge from the tunnel. DI Dimmock is waiting.

But it was in last Thursday's episode of "Hunted" that the tunnel figured significantly.


Next Bus Blog : Sunday 28th October
Posted by fatbusbloke at 00:54