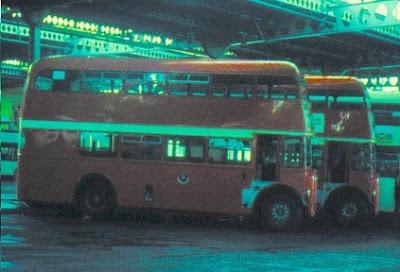 So fbb didn't dream it! 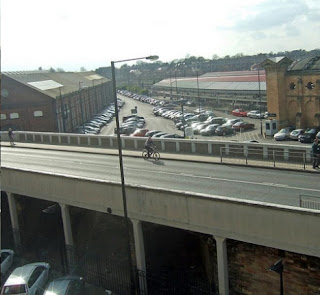 ... nothing at all? The fat bus bloke will return to this in a moment. In the meantime, the reasons for York Councillor Dave Merrett's wearing of a fake ginger moustache remain shrouded in mystery and impossible to resolve.

But we can explain the Queen Street Bridge.

The railway arrived at York in 1839 from the south and terminated at a temporary station located where the car park is now situated as in the top picture. In 1841 the line from the north arrived and a "permanent" terminus was built. 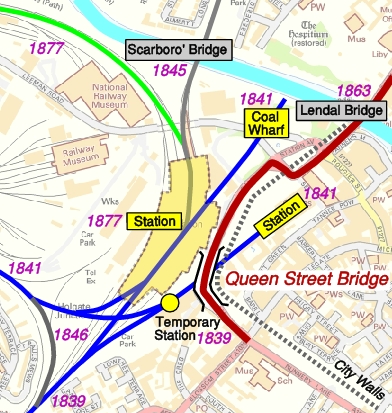 It was built on the site of a paupers' hospital by breaching the city walls in an act of archaeological vandalism that would not be tolerated today. The Scarborough line was opened in 1845 and by now the 1841 station was becoming too small for the growing traffic.  The engraving below shows the layout post 1845 with the Scarborough Bridge top left.. 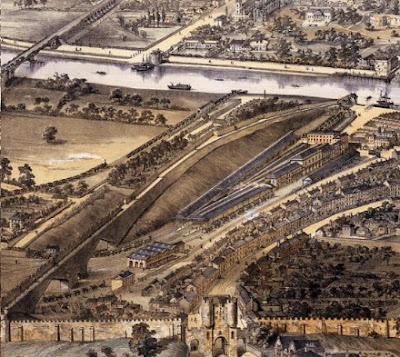 Top right we see the site of the ferry that crossed the river to the Lendal Tower on the north bank. In 1863 the Lendal Bridge was opened ... 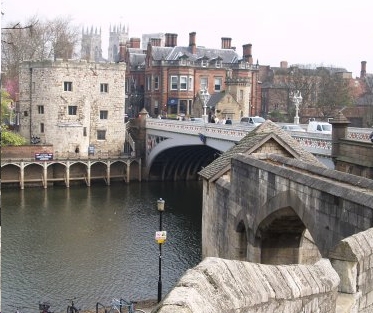 ... and the ferryman was compensated to the tune of £15 and a horse and cart!

A toll was charged to cross the new bridge to help pay for its construction. The charge was half a penny for foot passengers, a penny for animals and twopence for horse-drawn vehicles. The two small toll-houses can still be seen today, now housing cafés. The last toll was charged in 1894.

In 1877 the present York Station opened and a new road was built from Micklegate Bar, round past the front of the station, through yet another breach of the city walls and linking with the Lendal Bridge. Although the original station then closed, the tracks were retained for parking rolling stock. Thus Queen Street bridge was needed to take the road over the rails. 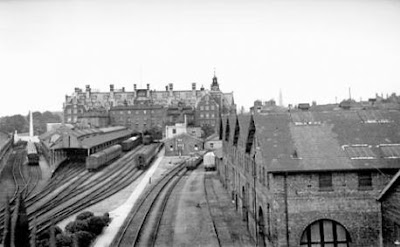 The lines remained in use until the mid 1950s when everything finally closed. Some of he station buildings (including the splendid hotel) were, however retained and still stand. 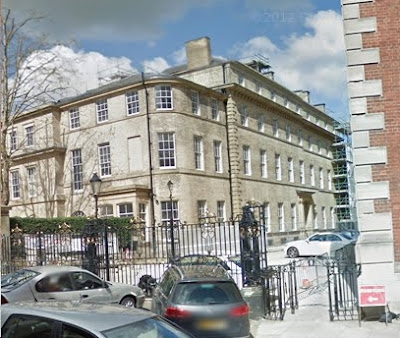 In 1999 it was necessary to strengthen and widen Queen Street Bridge and it was thus suggested that the whole structure should be demolished as it served no useful purpose. fbb was doing some work for York City at the time and a senior officer relayed the crazy news that British Rail was insisting that the bridge must remain "just in case".

January 1999
The City of York Council decided to reinforce the bridge after detecting weaknesses in its structure preventing it from comfortably carrying 40-ton lorries - which it should do under new EU regulations that came into force on January 1. Senior engineer Mike Tavener said: "We had the option of ripping the bridge out and building a new one; but that would have been incredibly disruptive to traffic, not to mention expensive to the taxpayer. We came up with this scheme in which most of the work is done under the bridge - people won't even know it's going on apart from the few days we have to close it."

If Councillor Merrett gets his way (and a large bag of money) the bridge will, only now, be razed to the ground to make way for a brand spanking new bus station; which, following modern trends, will almost certainly be too small!

One little architectural delight is revealed by fbb's research. Take a look at a small block of houses in the centre of this "clip" from the post-1845 engraving (full picture above). 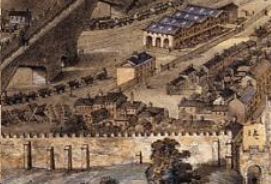 And here they are in 2012, now surrounded by modern office blocks but standing as a reminder of York in the nineteenth century. 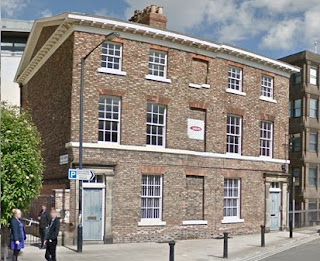 You do wonder whether Councillor Merrett's proposed new bus station, if it ever happens, will still be standing proud after nearly 200 years?


Next Bus Blog : Wednesday 17th October
Posted by fatbusbloke at 02:23