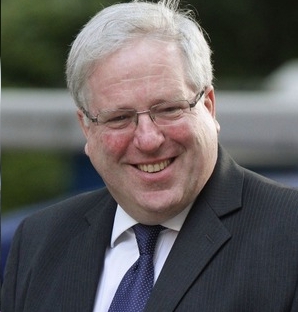 Mr Patrick McLoughlin pulled the plug on the proposed change to the "West Coast" rail franchise early yesterday morning, saying "unacceptable mistakes" were made by the Department for Transport (DaFT) in the way it managed the franchise bids from FirstGroup, Virgin and two other companies. "I want to make it absolutely clear," he said, "that neither FirstGroup nor Virgin did anything wrong. The fault of this lies wholly and squarely with the DaFT officers. Both of those two companies acted properly on the advice that they were getting from the Department."

First wanted to run the trains,
But Branson said "You must
have something wrong with your brains,
and mind that you don't go bust!"
The bearded Virgin wonder
would take the decision "to court";
Thus ripping the plans asunder,
"You've done what you hadn't ought"
At the DfT much suspending?
They're simply not up to scratch.
Branson's smile's never ending;
He's won the great slanging match.

Nearly fainting with the pain,
Dave Cameron cried out in vain:-

All together now, one last time ...

Today's planned blog, "Investigating Ivybridge [2]", is now to be split over two days. We are looking at the publicity for Plymouth Citybus service 45 which started last Sunday; and comparing it with First's service 88 which will join the fray next Monday, October 8th. First Bus will be offering no Sunday journeys.

In simple terms the two routes are very different and fbb will "contrast and compare" as below (and tomorrow!) 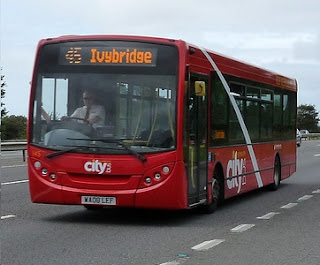 Plymouth City Bus  the route.
Is a main road only direct run via the A38 ... 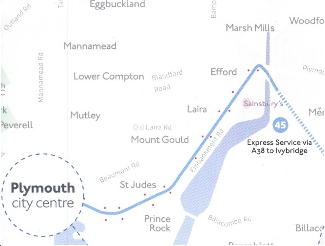 ... the centre of Ivybridge (as below) and terminating at the station.

The main map (above) could well do without the clutter of place names most of which (all of which?) are not served by the 45 as it whizzes along Embankment Road to join the main dual carriageway A38.

First  the route
Is much more of a local bus in Ivybridge. Every 30 minutes, it serves the "Langham Levels" estate to the west of the town centre ... 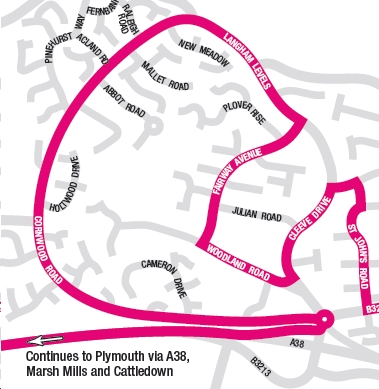 ... and then has alternate hourly loop journeys, both numbered 88 to confuse the passenger, ... 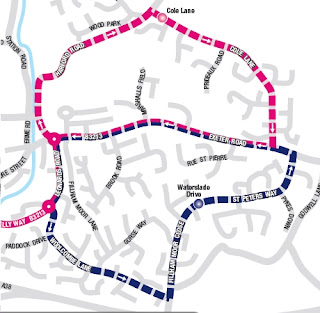 ... via Cole Lane (Barbie pink) or St Peters Way (blue); both returning via Exeter Road. Most of these roads are also served by the sporadic route 180 ... 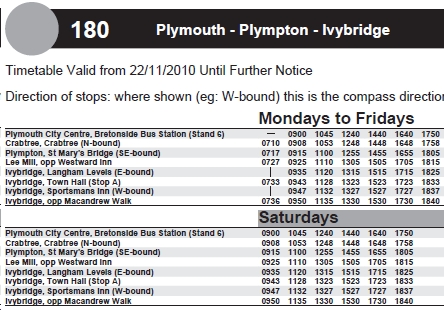 ... which, from the map at least, suggests this service may be withdrawn or incorporated into the 88 in the future. 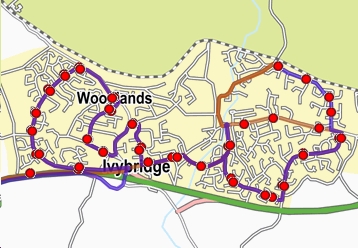 The 180, like the longer distance X80 does, however, use the old main road, via Lee Mill and Plympton, whereas the new route, like the 45, hurries along the faster A38.

So the first question to be answered in due course is simply this. Which service will generate the most business? Will it be the straighforward 45, nippy but serving only the traditional village areas of Ivybridge? Or will First's more tedious trek round the estates ... 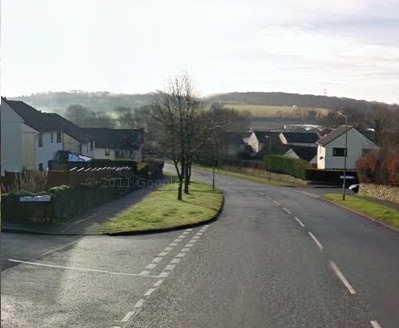 ... be attractive to those residents for whom the existing 180 is too infrequent to encourage casual usage?

A difficult one to call!

Next Bus Blog : Friday 5th October
Posted by fatbusbloke at 04:03