Harry Potter and the Obstreperous Oyster [2]

Cerny has taken a "London Bus", added huge glass fibre buttocks (ugh), a pair of arms and some gubbins so that the bus appears to do press-ups. 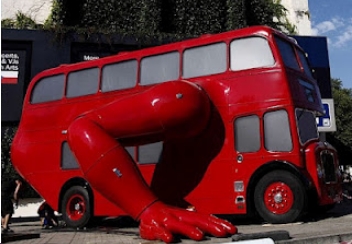 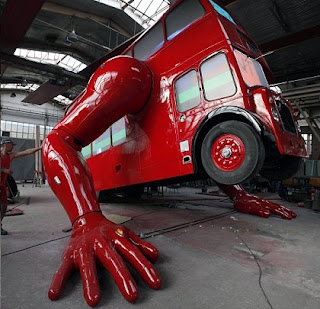 But at least three buckets of rhubarb to the Mail. It is no more a London Bus than fbb is favourite for gold in the Olympic 100 metres. [Whoops, fbb's identity revealed at last?]

Dear Mr Daily Mail, it is a Bristol Lodekka, actually THIS Bristol Lodekka [ODL 15, fleet number 555], photographed outside Freshwater depot on the Isle of Wight. 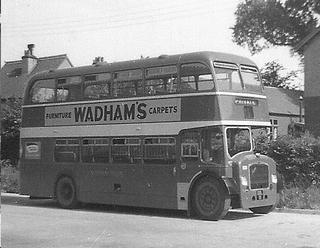 Cerny bought it from its owner in the Netherlands whither it had been exported a goodly number of years ago. 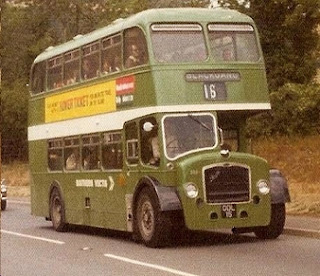 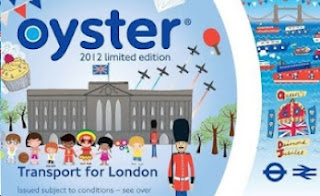 Yesterday's blog (read again) posed two questions. Firstly, what is the Oyster "cap" on an off-peak (Saturday) day's travel including Zone 5.
Answer: £8.50. [prices may have changes since this blog was composed]

Secondly, why was Alan (Harry Potter) "capped" at £7.15?
Travel around London is cheap and easy using this piece of plastic and, according to the publicity, you will be never charged more than that equivalent one-day travel card, however many times you touch your Oyster card on the little yellow readers. 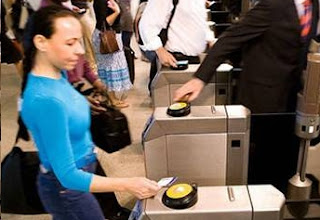 So, unravelling the truth from yesterday's jocular blog (?), the chubby one and chum Alan both travelled on silly Southern cheap fares from Portsmouth to East Croydon [£3.25] and then began their jolly round the rails of East London, including a visit to Dagenham Dock in Zone 5.
fbb bought a one-day travel card at £8.50 and Alan used his Oyster, confidently expecting to be charge the same £8.50. When the twosome eventually arrived back at London Victoria, Alan decided to check his payments. The screen showed this ...

... as revealed yesterday. This appeared to show that Alan had been capped at £7.15 (honest, that's what it looked like.) In fact there were journeys missed off the bottom of the screen which actually made the calculation right. Boris the Blue had NOT generously given Alan an extra discount.
.
But just look how complicated the whole thing is.
.
Barking to Kings Cross charged £2.60 as an NR journey [at 1441]
The same journey charged as £0.00 as an LU journey [at 1526]
Yet Alan travelled all the way by Hammersmith and City [LU] train, and only once, not twice;p an hour apart as implied!
.
[LU = London Underground : NR = Notwork Rail]
.
There there are two "journeys" from Stratford International to West Ham, one charged at £1.40, and one charged at £0.00. Presumably there are LU and NR again, but there's no room on the screen display.
.
All these complexities are to ensure that Boris gets his fair share of the overall revenue, accurate to the penny. Only it hasn't and he doesn't. It is no wonder that people are confused and overcharged.

Thousands of Tube and rail users are still being “ripped off” on Oyster pay-as-you-go because they don’t touch out at the end of a journey. The latest figures for the Tube, Docklands Light Railway and Network Rail/London Overground show that the total cost of “incomplete” journeys rose to £66.5 million last year compared with £63 million over the previous 12 months. An incomplete journey is normally one where the card holder has not touched out at the end of a journey. When this happens they are charged the maximum fare for the longest journey they could have made, which could total as much as £7.80 for a single zones 1-6 journey.
.
Reasons for incomplete journeys include passengers forgetting to tap in or out, barriers being left open to prevent overcrowding after major sporting events or concerts, and machines failing to work.
.
When leaving Victoria, chum Alan made a small contribution to this £63 million. After being correctly "capped" at £8.50 he was charged a further £4.25 because, sinfully, he didn't touch out, despite the fact that he had already paid in full for ta whole days travel! What caused the normally law abiding Alan to transgress in such a heinous manner? 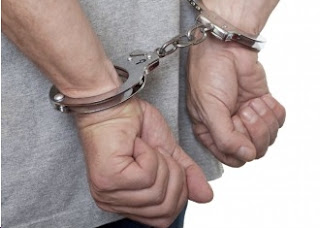 Answer he simply couldn't touch out!
.
fbb and Alan, you may remember had pre-booked cheap tickets to and from East Croydon. So they scheduled their departure from Victoria on the specific train prescribed by the cheap-o ticket. Victoria to East Croydon by Oyster; sit tight and transform, like Cinderella's pumpkin, into a cheap fare payer from East Croydon to Portsmouth whilst resolutely remaining on the same train.
.
Alan carefully explained his dilemma to barrier staff at Victoria offering to touch in, then have the man at the gate touch out for him. Or, maybe let him though the barrier without even touching in. He even offered to show "the man" the screen as illustrated above. The staff neither understood, nor cared, to Alan was fined for not touching out and his capped day's travel cost £12.75 instead of £8.50.
.
Alan, like fbb, is not a man to be trifled with. He wrote a stiff and vehement email to Boris. After about 2 months delay he received this reply:-
.
I have had a look at your journeys on the date in question and I can confirm that you have an incomplete journey.
.
I am able to process a refund of £4.25 for you to collect from a station of your choice. Please reply to this email with the name of a station that you will be travelling from. Refunds sent to nominated stations remain there for a period of seven days before expiring. In light of this, please also specify the date you will next be travelling.
.
Erm, why can't you just credit his Oyster account?
.
You will just need to touch in and make your journey as normal and your balance will be updated as you pass through the ticket gates. If you will be travelling from a station with more than one line, please also let us know which line you'll be using (eg Jubilee, Bakerloo, Northern). This can be any Underground, National Rail, DLR, Tramlink or Overground station within the Oyster zones.
.
Erm, (again) why can't you just credit his Oyster account?
.
If you would rather we sent you a cheque, please confirm your full postal address.
.
Erm, (again) why can't you just credit his Oyster account? CHEQUE PLEASE! Which duly arrived a further two months later. 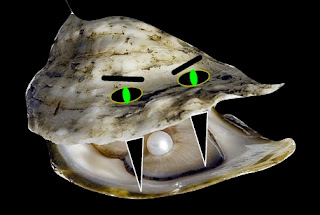 The Obstreperous Oyster strikes again! How many "normal" London commuters will bother to go through this tortuous travail? That's why Boris and chums are banking £63 million which isn't their's!
.
Boris : do you REALLY (no, really) have to make it all so complicated?
.

Next Blog : Tuesday 31st July
Posted by fatbusbloke at 02:55