One problem with First's web site is that Ipswich is not listed. From First's point of view it is part of Norwich! The news that a bus war was about to break out prompted fbb to have a good look around, virtually speaking. There were many rumours when First pulled out of Bury St Edmunds earlier in the year; announcing that there would be "no redundancies" and "resources would be redeployed elsewhere". So now we know. First's revised Ipswich network starts on Sunday 29th July. 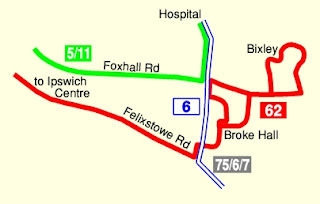 New services 55/56 will replace the existing service 62, providing faster journey times to Ipswich Town Centre from Bixley and Broke Hall. A 15 minute service will operate along Foxhall Road, with an hourly evening service and a half hourly Sunday daytime service. 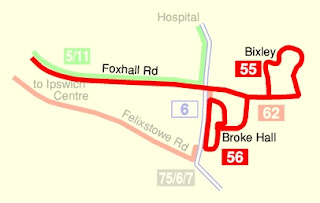 Undoubtedly this is a poke in the eye for Ipswich buses who have had Foxhall Road to themselves since time immemorial. There will be no increase in frequency to either of the estates; the plan simply splitting the service at its outer end. But the 55/56 will provide competition for the 5 and 11 hospital circulars ... 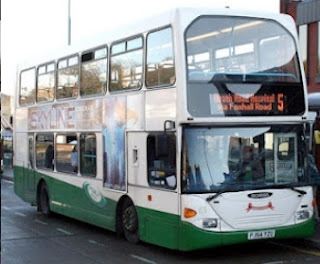 ... which offer a 20 minute frequency. From a passenger point of view travel from Broke Hall and Bixley will be a little quicker into the town centre but there will be grump from those who will no longer be able to make a simple journey to stops on the Felixstowe Road.


Changes in the Gainsborough area are more dynamic. 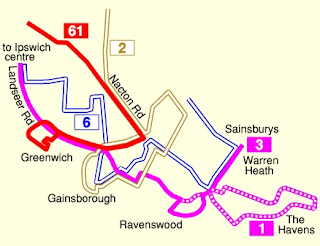 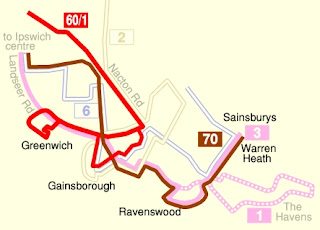 The current 15 minute frequency to Greenwich is reduced to every 20, but an additional service 60 will delve deeper into the Gainsborough estate every 20 minutes offering a better service from there to town than either the Ipswich Buses 2 or 6. The brand new 70 (Monday to Saturday ONLY) nibbles away at the 6 and may extract some business from service 3 to Sainsburys. 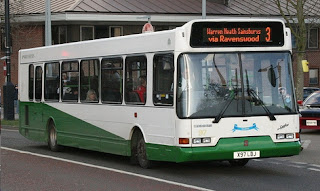 The use of service number 70 is, perhaps, a mistake. Did the First management team realise that there already is a 70 in Ipswich? 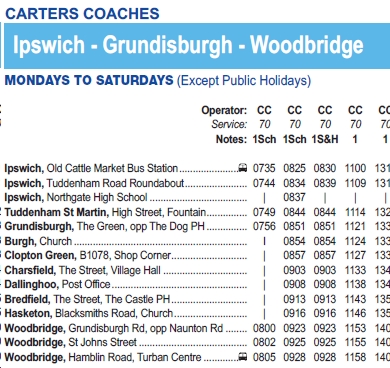 First, presumably, expects to snaffle a smidgen of the shoppers market at Sainsburys, although the all-conquering motor car is the choice of the majority. 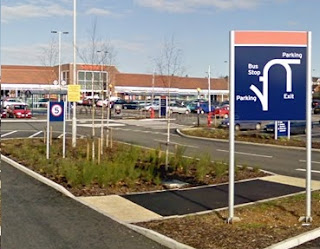 And what does Ipswich Buses have to say?
Managing director Malcolm Robson said he was already planning to fight back: “They have stepped up their services in this part of the town in the past, it seems to be an area that they are particularly interested in. Some of these services run over exactly the same routes as ours so we will be looking at a robust response over the next few weeks. We will publishing details very soon, and ensuring that we protect our business.”
fbb has contacted his former contact Malcolm who will be forwarding a set of leaflets containing his "robust response" as soon as they are available. Also a request has gone to First Bus for similar. When these arrive your esteemed blogger will be in a position to complete the picture. Other on-line sources have already outlined the Ipswich Buses plans but fbb prefers to see, not only what the next round of the battle is, but how it is publicised.  [since preparing the above, the full timetables have appeared on the First Bus web site]
Ipswich buses revised services start on 12th August.

For the record, there are also changes to First's out-of-town routes in the Ipswich area. 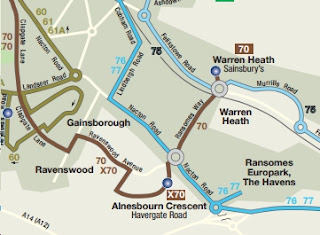 Service 75 is diverted to runs via Ipswich Hospital and is increased to every 30 minutes with no change of route for the 76 and 77. An occasional service 78 runs via The Havens despite what is implied by the map above. Click (here) for the full Felixstowe timetable. On the opposite side of town a revised service 88 from Stownarket is also extended every 30 minutes to the Hospital. [see blog comment for a correction to this paragraph]
Let Battle Commence!