The little electrons were struggling to squeeze through the long thin piece of electric string that joins the exchange to fbb's telephone. Blog preparation was seriously impeded throughout the day. So was real work for £££MONEY£££! As a result fbb was unable to complete the posting scheduled for today (Thursday).
The aim was to take a break from Largs, Glasgow, Scotrail etc. and take a look at bus/ferry (dis)integration at East Cowes, Isle of Wight. This will appear tomorrow (Friday) not-very-broadband permitting. In the meantime, the first in a series looking at the development of rail termini in Scotland's second City. (Oh dear, it's the first City according to Mrs fbb!)
---------------------------------------------------------------
So, a few days earlier than planned, it's back to Glasgow with ...


The first railway to arrive in Glasgow was from Paisley and terminated at Bridge Street ... 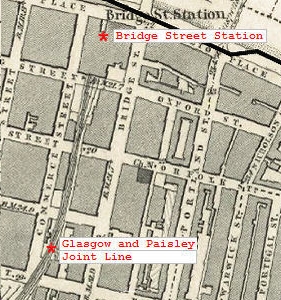 ... south of the Clyde, and just across the water from the present Glasgow Central. 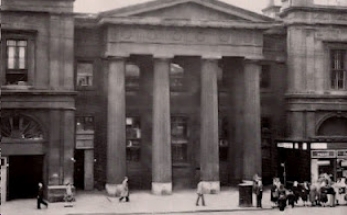 The station was adorned by a grand portico which it later lost. After the construction of a second station slightly further south, the original building became, first offices and was ultimately spoiled by an ugly shop front. 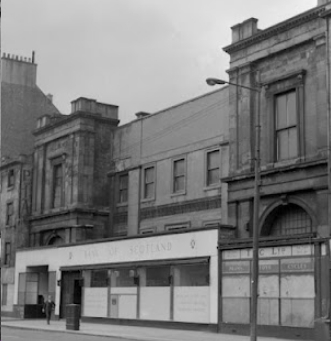 The line from London and the South arrived at Bridge Street in 1849. The original site is now a wooded patch of open ground with no sign of its terminal importance. 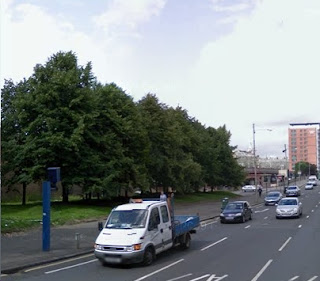 The "new" Bridge Street station building, opened in 1890 still stands and is now converted into "luxury" flats, although the surroundings still leave a little to be desired! 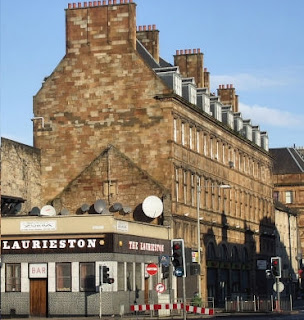 But it would be a great address with a view to the rear if you were a dedicated trainspotter, but, on the other hand, less than ideal for a light sleeper. 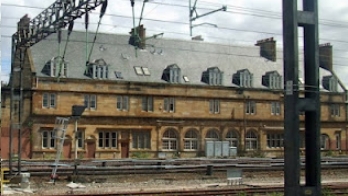 Whilst enjoying the delights of Glasgow's Bridge Street, we need to remember that the present station bearing that name did not appear until 1897 as part of the Underground. 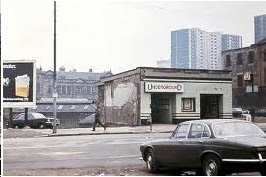 It is still further south down Bridge Street and on the opposite side of the road and, thankfully, the  entrance and ticket office were rebuilt for the 1977/80 modernisation. 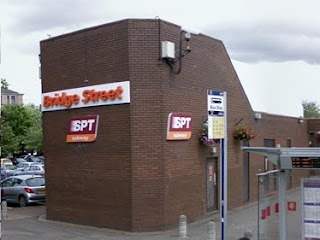 The Main Line station closed in 1905 but its importance had declined progressively when trains from Ayrshire were diverted to St Enoch Station in 1876 and in 1879 when the new Glasgow Central Station opened.

But we progress too fast. The westward growth of Glasgow from its original High Street was, effectively, created by the great Tobacco Barons in the eighteenth century. One such magnate, Andrew Buchanan, demolished his house (in the 1770s) to enable the building of a street northwards from the little church of St Enoch. 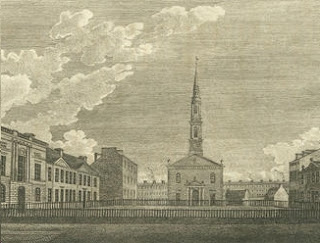 That street was subsequently named Buchanan Street and it became, arguably, the premier shopping street of the city. Effectively Andy, and his tobacco trading chums, created the grid pattern that now typifies the heart of Glasgow. Sadly the Buchanan tobacco empire collapsed and took Mr Buchanan with it! 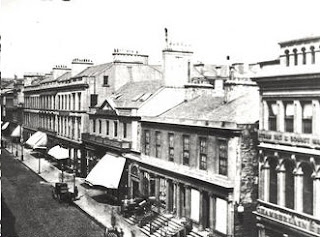 But the street named after him flourished and it becomes the spine which, more or less, linked Glasgow's four stations, as can been seen in this 1940s map extract. 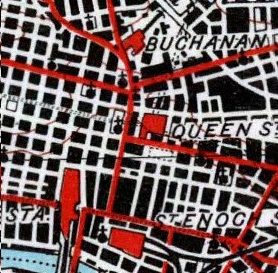 Buchanan Street is the red road running northwards from St Enoch and Central (bottom of map), passing Queen Street and stopping just short of Buchanan Street stations. Although this map is supposedly from the 40s it still shows St Enoch's Church which was demolished in 1925!
We proceed towards the top (northern) end of the spine next week.
Next Blog : Friday 13th July
Posted by fatbusbloke at 06:49