It is the very model of a modern motor omnibus ...


fbb vowed that he would never spend money on a full-price bus model; but this was £10 from Creative Master Northcord and is in the short-lived Southern Vectis "small bus" livery, used alongside big buses branded Route Rouge and Island Explorer. 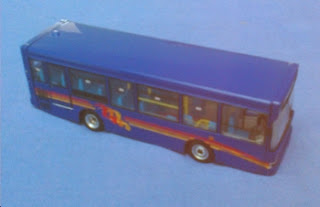 And this, a similar vehicle, in the even shorter lived Red Rocket branding for Eastleigh local services under the dynamic management of Phil Stockley. Bluestar was for frequent "main line" routes and, proposed but never implemented, "Green Leaf" for the rural services. 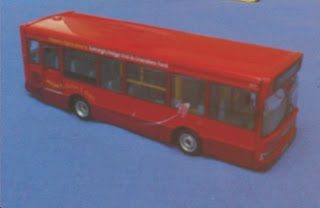 From the same stable, this one cost £6. Cheap as expensive chips.
But fbb just had to buy this one at full price, £24 from EFE. 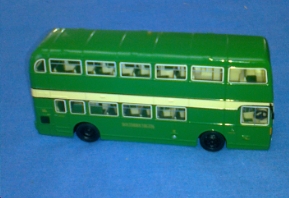 SDL 638J, fleet number 628. You see, for a brief period in the late 90s, fbb owned it! The flat fronted VR was delivered to Southern Vectis (SV) in 1971 and was ultimately "refreshed" to form part of the company's heritage fleet, used in service for a while on route 1 and 1A. In this guise it is seen here passing Island Bakeries at Binstead, now demolished and replaced by the ubiquitous block of flats. 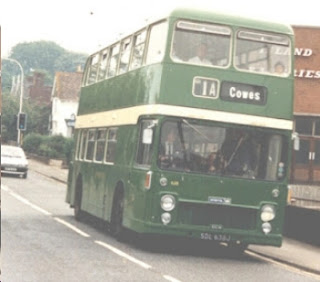 The heritage idea did not bring much in the way of commercial benefits and involved extra cost (conductors) so it was dropped and the vehicles disposed of, mainly to the embryo Isle of Wight Bus Museum. 628, however, remained in the fleet as a spare having been fitted with a new gearbox and power steering.
fbb bought it in April 1995 from SV to provide wet day cover for his Open Top operation and to carry large school parties on private hire duties. 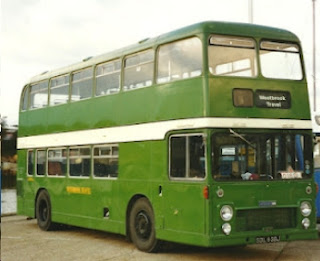 It was dubbed Zaphenath Panea** and the Southern Vectis fleet name was replaced by "Westbrook Travel" in a similar style.

All fbb's vehicles passed to Newbus Ltd at the end of December 1997 and when this company closed down in 2002, 628 was purchased privately and is now on the stocklist of the Museum.
Back in a previous blog, fbb mentioned that this bus is unique nationally (unless anyone knows better) because it has a working stair gate. When one-manning became an economic necessity it was believed that to operate a double deck with only a driver (omo) was unacceptable. So whatever the Ministry of Transport was called then ruled that omo was acceptable but only if the top deck was closed off. 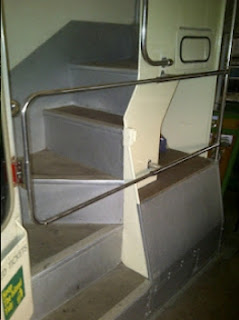 At busy times you could employ a conductor who would be only too happy to work split shifts and go home during the quiet periods. (!) Then the gate would be opened. 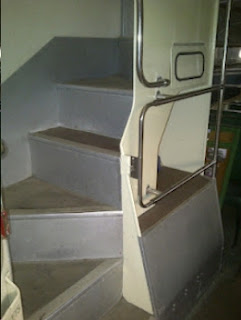 fbb is indebted to the present owners of 628 for supplying these pictures. A further titbit to savour is that the vehicle has had its rear destination equipment replaced to return the bus to an as-delivered state. 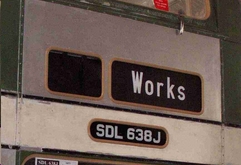 In ffb's ownership there was just a blank panel; it is the original version that is modelled by EFE.

Incidentally, fbb bought his bus models from Hattons of Liverpool. The three were ordered on-line on Wednesday, packed on Thursday and delivered to the Isle of Wight early afternoon yesterday (Friday) by someone or something called, oddly, "Yodel". Delivery charge was £4, a flat rate for more than one model. Hatton's web site is (here).
And as for 628, she (he? it?) is fit and well after a little over 40 years and fbb is pleased to have had a very small part in ensuring its unique survival.
The model brings back happy memories!
** Zaphenath Panea : as you would expect from an active and committed Christian, all of fbb's vehicles were named after characters from the Old Testament of the Bible. Partriarch Jacob gave his favoured son a coat, incorrectly translated as "of many colours" (it wasn't, the original Hebrew text means "a coat with long sleeves"). His brothers, understandably, sought to "take him out". After many adventures he ended up as No 2. big cheese of Egypt. Unable to pronounce the Hebrew name Joseph, the Pharoah (No 1 even bigger cheese) named him Zaphenath Panea! 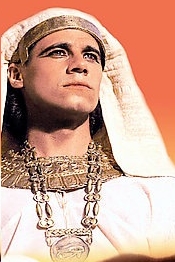 Had fbb stayed in the bus operating business he would have named his next vehicle "Mahershalalhashbaz", a familiar character (?) from the book of Isaiah.
Next Blog : Sunday 29th July
Posted by fatbusbloke at 02:28