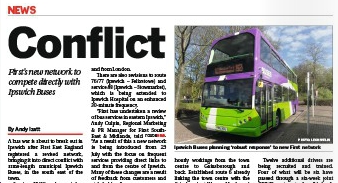 First's new network to compete
directly with Ipswich buses
Thus stormed the headline in "Route One" just a week ago. Now fbb has visited Ipswich only once, about 100 years ago, for a meeting with the then affable and dynamic general Manager, Malcolm Robson. fbb's visit included the short walk from the railway station to the Constantine Road depot of Ipswich buses and back, but nothing else. The depot is still there, functioning well ... 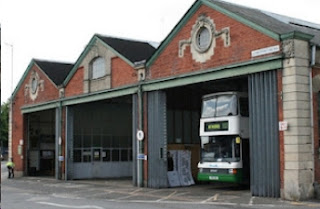 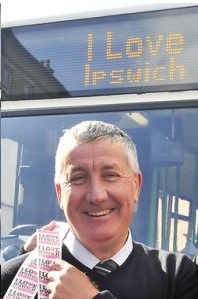 Over the years, Ipswich Buses livery has changed from staid but distinguished green and cream ... 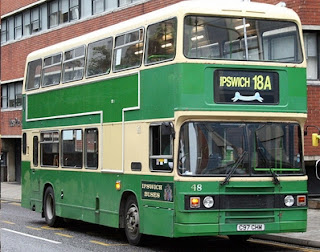 ... to a modest tilt a modernity with slanty green and white:- 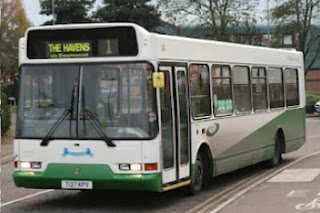 Malcolm's latest effort, however, has raised a few eyebrows as we now enjoy (?) blotchy green and purple! 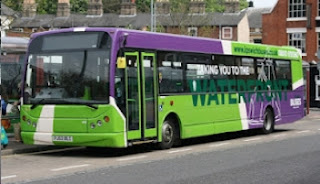 It's certainly different! Of course, something like it has been tried before ... 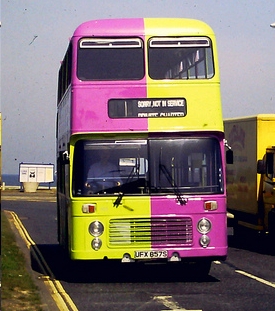 ... but delivered in a more geometric style.

The company has steadily and unexcitingly served its customers for more than 100 years ... 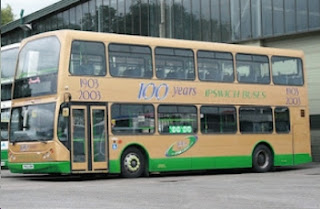 ... so it came as something of a surprise the hear a year or so ago that talks were underway for its sale to GoAhead. This from Bus and Coach magazine on 31st December 2009 ...
Go-Ahead is in talks with Ipswich borough council about buying the council’s Ipswich Buses business. The company operates 70 vehicles. The move follows Go-Ahead’s purchase of the council-owned Plymouth CityBus operation at the start of December. The deputy leader of Ipswich council, John Carnall, says: “Ipswich Buses is a minnow in the bus industry and is facing financial difficulties. In looking to link with Go-Ahead, it gives us the opportunity to bring in a national transport provider with a very good reputation, highly-skilled management, and economies of scale which Ipswich Buses could never achieve. This is likely to protect Ipswich Buses and improve services and fares for local people.”
... but soon after (30th September 2010) ...
However this week Carnall said that while the talks were amicable he and his colleagues had decided that it was not possible to progress the matter now. “We would like to thank the management team at Go-Ahead for their positive approach but action now would not be appropriate.”
... and it didn't happen. So Ipswich Buses remains one of the few municipal bus undertakings that is still owned by its founding Council. There aren't many left. The Last of the Few.
But in a spooky twist of fate, Councillor John Carnall ... 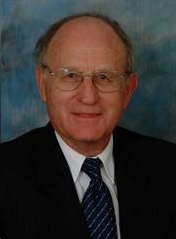 ... represents Bixley, one of the wards where, according to "Route One", this bus war is about to break out.
So, tomorrow we take a look at the status quo and the relationship between Ipswich Buses and First Bus today - before the First first shots are fired at the end of the month. 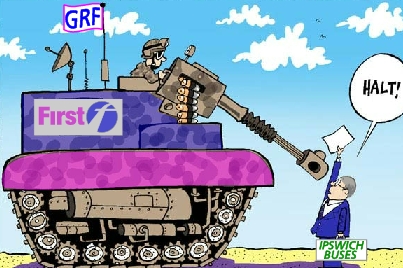 Grab your helmets and body armour?

The Few is a term used to describe the Allied airmen of the Royal Air Force who fought the Battle of Britain in the Second World War. It comes from Winston Churchill's phrase "Never, in the field of human conflict, was so much owed by so many to so few". It also alludes to Shakespeare's famous speech in his play, Henry V: "We few, we happy few, we band of brothers...". Of the 3,000 "few" (approx) who fought in the Battle of Britain, very few are still alive; hence "The Last of the Few." Although these lads (and lasses on the ground) did their noble stuff four years before fbb was born, we all need to remain grateful for their service and sacrifice.