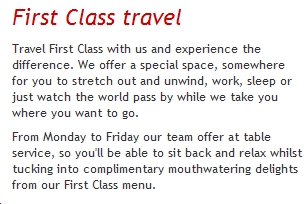 If you can afford it, first class looks very attractive. The pictures of the food choices from Virgin are truly mouthwatering, a reminder of fbb's more youthful days when full breakfast was available on most "intercity" lines; and in second (now "standard") class, too. 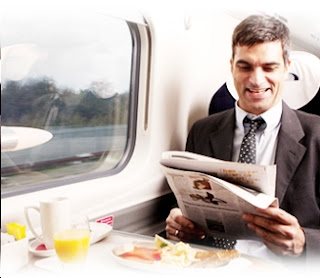 A regular monthly meeting involving a journey from Sheffield to London was routinely enhanced by sit-down lunch which, with a second pot of tea, could be strung out to give first class seating at a second class day return price for most of the journey! 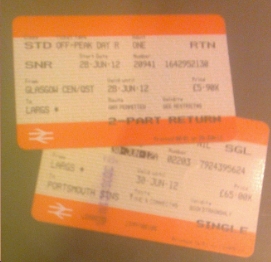 fbb and Mrs had booked "Advance" first from Portsmouth to Largs for their recent holiday. But there is a snag if they were hoping for sumptuous food. In the above adverts, note those dreaded words "on Mondays to Fridays".
On their outward journey, the fbbs were diverted via the East Coast line and here, again, the inviting inclusive food offers seemed very attractive ... 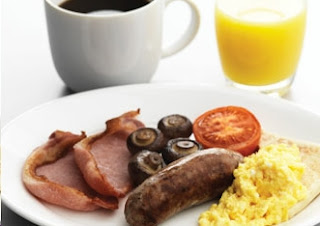 ... but were replaced at weekends by this:-

The 1030 from Kings Cross to Edinburgh was too late for the "light breakfast" so it was sarnies and stuff only for over four hours of travel. The sandwiches were offered three times on the journey, the selection of drinks four times; adequate quantities but well below Monday to Friday expectations. There was a massive choice of sarnie, cheese "ploughmans" or tuna "mayo", a choice of two sorts of posh crisps (small packet) and a choice of two sorts of posh biscuits (small packet). At least the tea/coffee was served in real cups!
Fbb and Mrs were on a cheap fare offer, so perhaps they got what their fare deserved; but had they paid the full fare of £363.60 (and that's with Senior Railcard discount) the above weekend offering would have been an insult.
The return journey was with Virgin and, frankly, the provision was a disgrace.

For the whole journey from Glasgow to London, the offer was two visits with tea or coffee from a cardboard cup, and (very) small bag of posh crisps and a (very) small pack of shortcake biscuits. A third trolley-call was made with one (small) bottle of water. 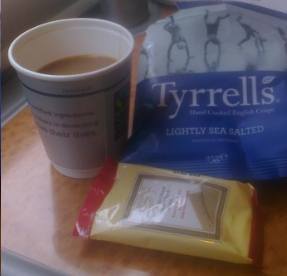 Apparently it was a fruitless season on June 30th. Compared with East Coast trains' barely adequate weekend service this was like something out of an Eastern European seedy spy story.
By comparison, Scotrail between Edinburgh and Glasgow (on a 50 minute run) offered fruit juice, bottled water, tea or coffee and a mini pack of something eminently nibblable.
Southwest Trains, super meanies that they are, offer nothing except a nice blue antimacassar. fbb was tempted to rush out and buy some macassar so he could get value for money on the return run. 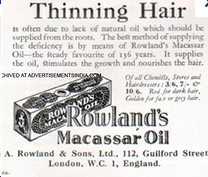 But here's another railway fares anomaly.

Portsmouth Harbour to Glasgow Central
first class anytime return
with senior railcard
£357.70
.
But there are no first class seats between Glasgow and Largs, so is this add-on for unavailable first or standard travel?
.
fbb's conclusion is simply this. Proper full price first class is a complete waste of money at weekends. The choice is a toss-up between "advance" first class, or standard class and a "weekend first" upgrade. The only real benefit is a little more comfort, a little more space, and (usually) a more peaceful environment. 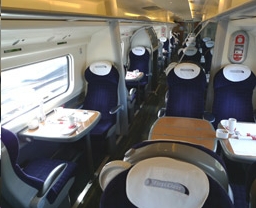 Virgin first class seating
.
But you do get a nice blue antimacassar from Southwest Trains. 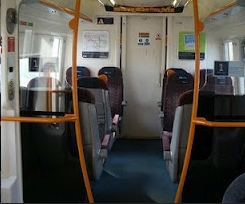 similar to SouthWest Trains first class luxury
But, once upon a time ... 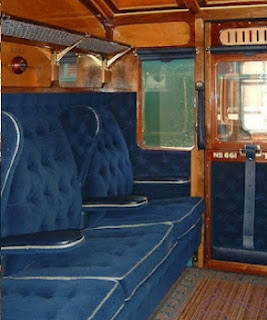 ... first class was really classy; look at those lovely deep-sprung seats.
.
Next Blog : Tuesday 3rd July
Posted by fatbusbloke at 06:27