Can you find it?


There were, in essence, four ways to get from Queen Street Station in Glasgow to Central Station. These are: walk, taxi, underground and shuttle bus. 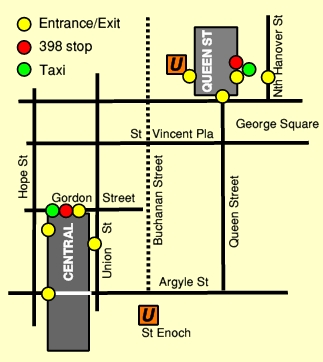 fbb and Mrs usually walk (for example, starting at Queen Street Station) via Queen Street alongside George Square, St Vincent Place, which used to have useful free toilets - alas free no more, Buchanan Street precinct and Gordon Street. There are no signposts to guide you apart from this one:-.

It is high in the roof of the Queen Street station entrance area and it took fbb some time to spot it; but, as far as fbb can tell, there are no others so you won't be following it very far! fbb will be happy to be corrected by a local Glaswegan expert.

A new Buchanan Street underground station entrance was created alongside the remodelled Queen Street in the 1977/80 upgrade ... 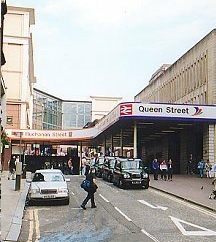 ... and the entrance has been further "improved" more recently. The underground station at St Enoch ... ... is not far from a couple of the entrances to Central but, probably, by the time you have descended, fully encumbered with luggage, trekked and ascended and trekked some more, it is quicker to walk all the way.
That leaves the Inter Station bus, the 398 of the title of this blog. On his recent tortuous journey from the Isle of Wight to Largs, fbb was diverted via the East Coast main line and Edinburgh. Taking the fast connecting train service to Glasgow then requires crossing the centre of the city to Central. fbb missed the signs at Queen Street which were either ...

... high in the air and out of an eye-line when wrestling with luggage and ticket gates OR easily confused by travellers weary with a complex and stressful journey.

Would the weary twosome be whisked inadvertently off to Glasgow Airport? It was far from clear.

Note that the "bus link" logo appears to be for the Airport Shuttle, not the inter station bus.

Unwilling to add to the stress of the journey, the fbbs took the easy way out and walked! In fact the bus does still run as the fbb's were able to confirm on arrival at Central Station; where the signage was somewhat better - if your eyesight was OK.

This information was too late for the fbbs who proceeded to their Largs "pad" where the chubby one  set about finding out what sort of timetable was offered these days, and by whom.
Over the years the station bus has been run (as service 98) by Greater Glasgow PTE ... 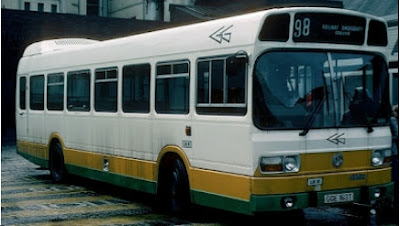 ... with a variety of vehicles. 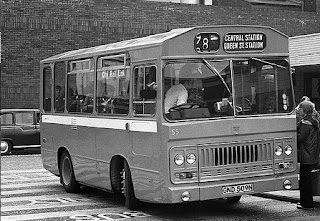 By Wilson's of Carnwath ... 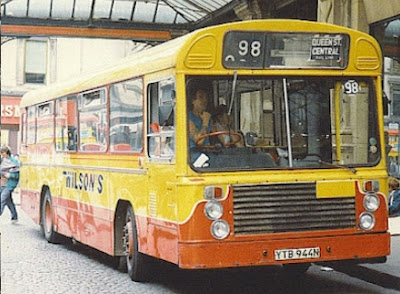 ... now no longer in business. Also by John Morrow Coaches of Clydebank. 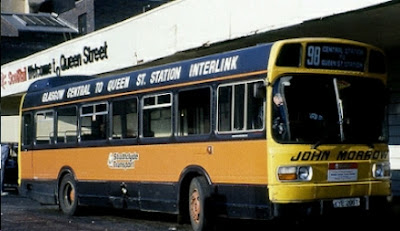 Mr Morrow has recently retired and sold his business to the independent Glasgow Citybus; but Morrow has not operated the station bus for some time.

For a brief, and fairly disastrous period, the service was operated experimentally by electric buses, in a swirly blue and green livery as far as fbb can remember. A search of the intewebnet has so far brought little information on this experiment but, on the only occasion fbb attempted to try out the service, all three buses were parked up, defunct, at Buchanan bus station. The press extract is from the Glasgow Herald of 22nd June 1983
Can anyone "out there" supply further details and, preferably a picture? fbb will publish both with due acknowledgement.
Episode two of this blog will cover fbb's search for the truth and, eventually, a ride on the secretive 398. Needless to say, the trials of the tortuous Traveline trouble the chubby one.
.

Next Blog : Wednesday 11th July
Posted by fatbusbloke at 04:16