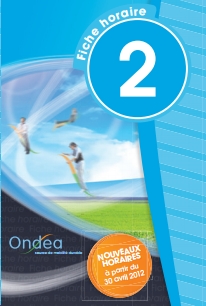 There is no doubt that public transport information in Aix-les-Bains (France) shows a "panache" that is rarely present in the UK. But the network that is publicised has a very different feel from that back in Glorious Albion. 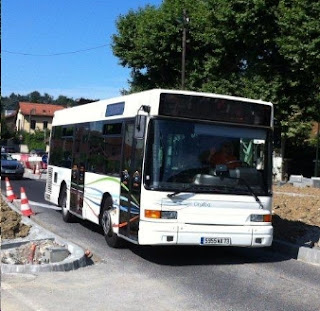 The political attitude to public transport is revealed in the concept of  network tendering. In this case the local authority invites companies to operate the "Ondéa" network. The current holder of the franchise is Keolis, owned by (nationalised) French Railways. See "From Kent to Aix [1]" (read again).
There are only two "normal" services; Route 1 (ligne 1) referred to yesterday which runs every 20 minutes on its central core section but is extended significantly every 40 minutes at both ends.  See "From Kent to Aix [2]" (read again).  The full ligne 1 timetable and route map can be viewed (here).
And ligne 2 ... 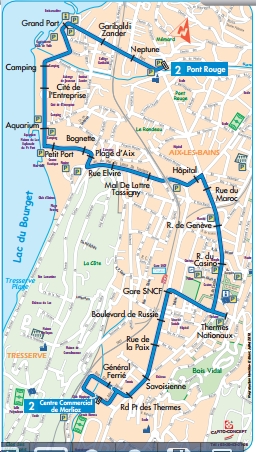 There are no later evening services at all and not a single bus runs on Sundays  [see "whoops bludner" below]  anywhere on this network. Services 3 to 20 all, without exception, revolve around the provision of transport for schools. That is not to say that they are school buses; far from it. BUT the service pattern is defined by schools' requirements. Table headings for ligne 3 may confuse a bus travelling Brit ... 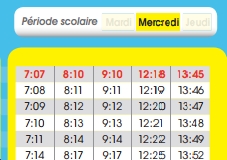 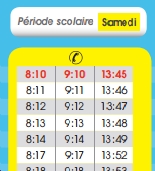 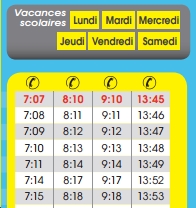 ... Monday to Saturday NON schooldays. The little telephone symbol means that journeys have to be booked "at least half a day in advance". So during the school holidays, you only get a bus if you ask for it! Not much good for last minute decisions if the timescale is rigidly enforced.
For those francophiles amongst fbb's readers this will come as no surprise. In the past, all French schools were usually closed on Wednesday (afternoons, even all day), but open on Saturday mornings. Nowadays, new timetable ideas are being introduced in many areas, for example with a longer morning Monday to Friday and physical activity every afternoon. In Aix-les-Bains, however, early academic closing on Wednesdays and lessons on Saturday mornings are reflected in the bus timetable. 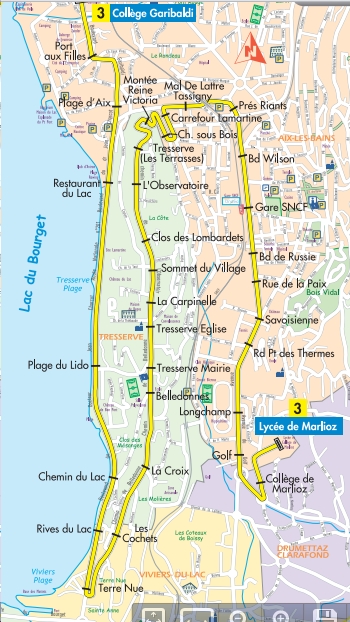 Route 3 wends its way southward from Collège Garibaldi alongside the Lac du Bourget on a largely unpopulated road ... 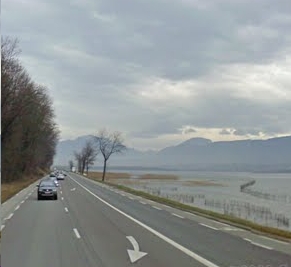 ... then turns north on relatively narrow roads through the community of Tresserve (pop. 3303). This is pretty, village-like, but hardly "good bus territory". 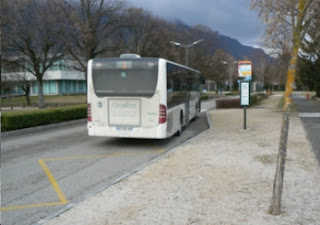 Certainly, on the evidence of Google Streetview, it is not surprising that the service runs as it does.
Finally, fares! Tomorrow, we examine the range of offers available in Aix-les-Bains. Once again, UK bus operators please note, everything is publicised there. No secrets from Joseph Publique! Of course, it is easier if you have only one basic fare for the whole network.
.
"whoops bludner"  One Sunday bus route runs (thanks comment writer Stephen). It is a mixture of lignes 1 & 2 running from Plage du Bourget via Aix-les-Bains to Lafin. fbb missed it because it is shown in a blindingly obvious fashion on the Ondéa web site (!) ... 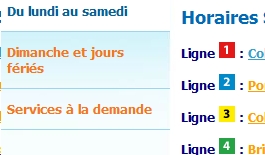 ...  but without a route number. It is called "DIM" - which is what fbb was to miss it! [DIM = dimanche, french for Sunday] Leaflet available (here). The service may not run in the winter months.