-------------------------------------------------------------------
This blog is not taken to blowing its own trumpet, but, occasionally it is good to hear from those who find it useful, entertaining, frustrating of just plain annoying. Two snippets dropped through fbb's email box recently. This re a piece last Sunday about the Higgs Boson (read again).
.
I had a mayday situation reading this blog! I found your language so amusing to read that I had to STOP. Why? because I was in hysterics and my eyes were watering so much that I could not continue to read! A cup of tea was required. Truly a wonderful blog explaining everything in simplistic terms. Well Done
Mind you, he didn't say how well he did with the "Gaelic" quiz.


In the previous episode of this blog, fbb recounted his difficulties in finding the Glasgow inter-station bus. Signage is not at all clear and mixed up with directions to the airport bus. If you were to arrive at Queen Street Low Level platforms, say from Milngavie, the confusion is resolved by sending you in totally the wrong direction.
The low level line runs roughly east-west with an exit at the western end which leads into the main station and an exit at the eastern end which leads out on to Upper Hanover Street. So the signs direct you eastwards for the airport bus ...

... which stops on North Hanover Street at this clearly signposted and distinctive bus stop. 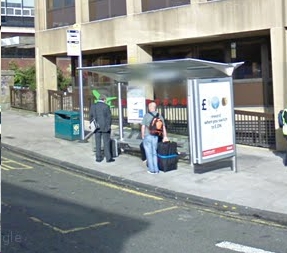 Surely something could be done in the way of an airport bus logo on the shelter?

Meanwhile, in the bowels of the earth, the sign for the inter station bus directs you westwards ...

... for a bus which doesn't stop anywhere near Dundas Street etc. 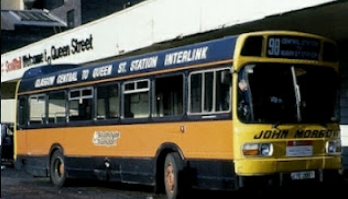 In fact, many years ago, it used to stop outside the entrance to Buchanan Street Underground station (western exit), but now it pulls into the taxi rank area just off North Hanover Street ... 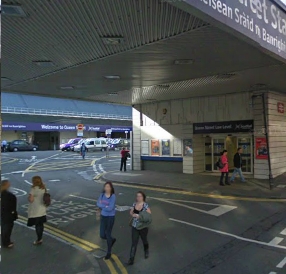 ... almost next the the North Hanover Street (eastern) exit seen here behind the person in the orange top and below in close-up. 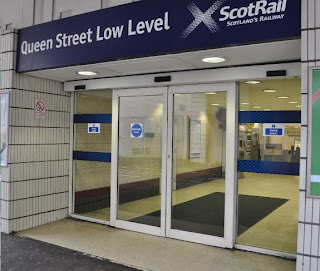 No-one has bothered to change the signs!
fbb and Mrs abandoned the unequal struggle to find the bus as they passed through on the way to Largs; but, undaunted by his failure, fbb later unpacked the laptop and began a search. As this bus links Queen Street and Central stations, an enquiry from Traveline Scotland should reveal who runs the bus. 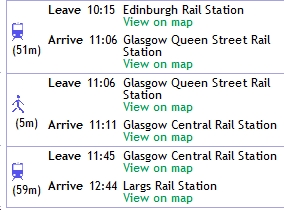 This was a typical result for a journey from Edinburgh to Largs. No reference to the inter station service 398 bus. A simple journey from Queen Street to Central stations is equally unhelpful. 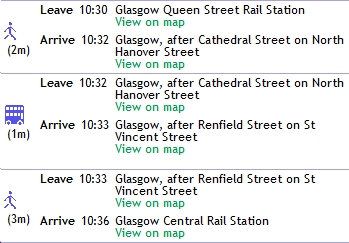 No 398 again; and can you really (would you ever try) make a one minute journey on the Airport Shuttle service 500? Even if you were allowed to, paying £5 for the privilege might be seen as a bit steep. 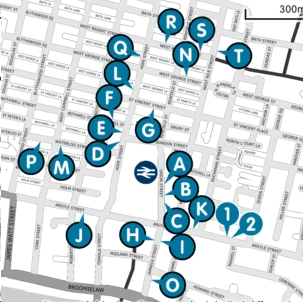 ... where the map showed a plethora of stops but (try looking on-line for yourself) no mention of the 398 or its stops on Gordon Street. The same anonymity applies at Queen Street. 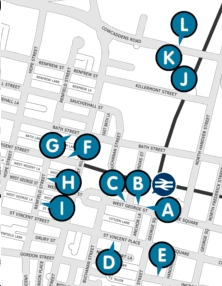 Nothing on North Hanover Street at all. The "airport" bus stop isn't there either.
So perhaps Strathclyde Partnership for Transport can help with a timetable for the 398? 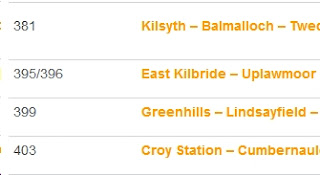 Nothing between 396 and 399. The plot thickens? Is there still an inter station bus? Has it been withdrawn as a result of budget cut-backs? It was purely by chance, when looking for something else entirely, that fbb found the 398 of First's web site.

Even then the stops list is unhelpful. There is no mention of Queen Street Station! The user has to translate the "Nth Hanover St" time point into "Queen Street Station Station Taxi Rank OFF North Hanover Street"; and what does "and at frequent intervals" mean? But here is one that fbb caught later in the week ... 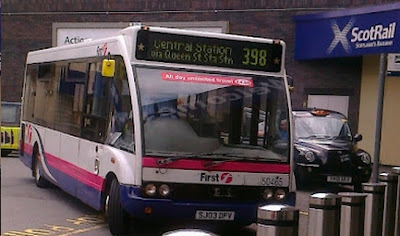 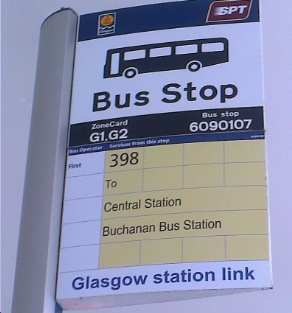 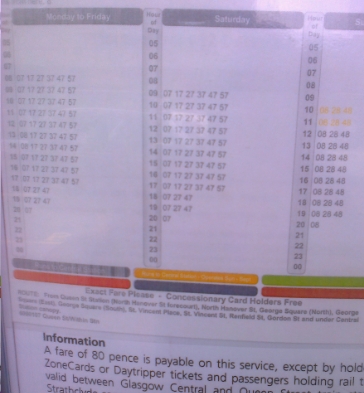 ... together with a note stating that the fare is 80p but that holders of through tickets travel free.  The latter piece of useful and attractive information does not appear anywhere else in fbb's vast collection of data.

Buses run every 10 minutes from 0800 Monday to Friday and 0900 Saturday until 1800 then every 20 minutes unti just after 2000. On Sundays the frequency is every 20 minutes from 1200 with a two hour earlier start during the summer months. The times shown in orange should convey the latter nugget of information, but the text in the matching orange "note strip" is incomplete and gibberish, so you might end up with a two hour wait! 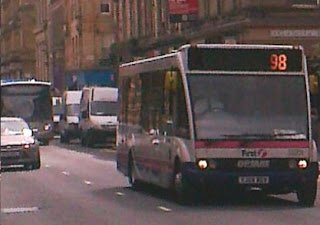 For reasons that are not entirely clear (!), this useful little bus is usually almost empty. fbb's trip carried a total of three passengers from Queen Street to Central and left for the return trip with no-one on board. And here's one in "SPT" livery:- 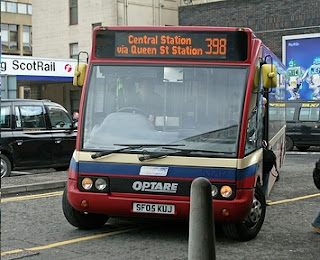 Even the usually impressive Scotrail site is almost silent on the matter. All that fbb could discover using the site's search box was an article on the introduction of low floor buses in SPT livery (fbb's were is First Bus barbie colours) ... 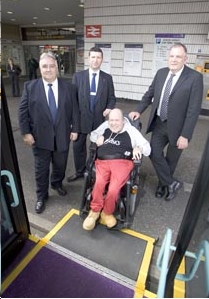 To improve loadings, fbb has a few suggestions:-
If it is an SPT route, then maybe ask them to publish the timetable?
Tweak the Traveline journey planner so it finds the 398
Tell people where the stop is, correctly
Ask nice National Rail to include it in their station information pages
Advertise it in the National Rail Timetable booksssss
Give proper details on the rail journey planner

Just one caveat. The existence of this service MAY be revealed in some of Scotrail's excellent printed timetable leaflets and booklets; which is better than nowt. fbb did not have any "hard copies" to hand but discovered this, on-line as a by product of looking for something else.

This booklet might, well possibly might, be a source of information and, lo and behold, this appears ...

... almost as an aside. fbb is not sure how readily available this booklet is, but a "passing mention" on page 20 of a 24 page guide with no maps or actual times is hardly likely to encourage usage. Would a "casual" user be willing to trust his interchange to this inadequate level of information?