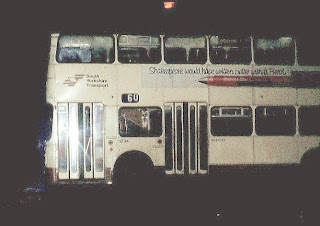 An empty bus without its driver stopped outside fbb's home at the summit of the steep Crimicar Lane in Sheffield. The photo is simply a reminder of a very spooky evening in the mid 70s. At sunset the temperature had dropped dramatically and the road had frozen over. BLACK ICE!
Over the brow of the hill came a sequence of service 60s, applied their brakes and simply started sliding totally out of control down the hill. At one point there were three buses at various angles totally blocking the road. Their somewhat shaky drivers sitting in fbb's living room drinking hot sweet tea.
Eventually, the gritters arrived and the vehicles regained their grip and returned to depot, shaken but not stirred.

Buses on West Bar, Sheffield with a little knot of policemen? Link that to this shot ... 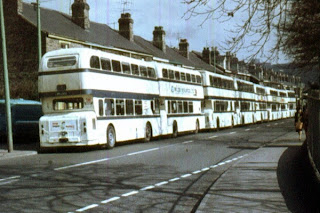 ... and wonder what's going on. Special football buses from City to Parkside Road Hillsborough were standard way back in Sheffield Transport days, but provisions for F A Cup semi-finals were a bit special with large numbers of vehicles waiting patiently for the final whistle. Drivers has a pass to watch the match but had to leave before full time to be ready to leave.

And what is happening here? 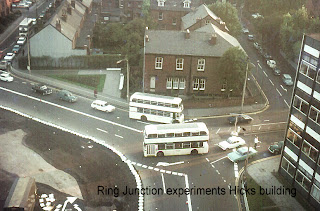 It was a "ring junction" experiment, staged by the Ministry of Transport, as it was then.

So what was (or is) one of those? Simply explained, a mini-roundabout is established at every entrance to a large and "proper" roundabout. The big roundabout then becomes a two way "ring-shaped" road and drivers can choose which way round the junction they go. fbb ALWAYS went the long way round as a matter of principle.

Trams now trundle across this junction in Sheffield, where Brook Hill and Netherthorpe Road intresect. The shot what taken from the roof of one of the Nertherthorpe tower blocks, fbb having been invited to view from where the men from the Ministry where filming their experiment.

The so-called "Magic Roundabout" in Swindon was similar and more well known ... 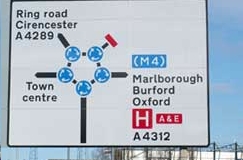 ... but its road sign explains the principle. The Sheffield experiment was relatively short-lived, the Swindon scheme was eventually superseded and "Ring Junctions" have now joined the illustrious history of unsuccessful road management experiments.

Sliding buses, football specials and ring junctions - all part of the rich tapestry of public transport operation from days gone by.

Next blog : due Saturday October 29th
normal blogging resumes on Monday
Posted by fatbusbloke at 07:16